I’m not going to lie to you here: I am in a terrible mood. One of my teeth appears to have developed a violent objection to, in no particular order, cold things, hot things, room-temperature things, and oxygen. Since I need at least two of those things on a regular basis to prevent myself from dying, I am in rather a lot of discomfort.

This is day seven. On day two, remembering that I’m a grown up and so this is something I can actually address in some way, I went to a dentist. She couldn’t find anything wrong, but she did suggest that I come back in a week if it hadn’t gone away of its own accord, and in the meantime I should avoid cold things, hot things, room-temperature things and so on. Then, on my way out I accidentally stepped on a pedal and a dental drill unexpectedly started howling at me, just to really ramp up the impression that I was living in some form of nightmare.

Anyway, the point is that my face hurts and that there is apparently nothing anyone can do about it, and bloody hell. Earlier a colleague smiled at me and I replied, “WHAT?” in the manner of Brett Kavanaugh being asked if he’d mind awfully taking a seat. I am in a shitty mood.

So: in an attempt to deal with that – while also dealing with the fact that, since the world is at the moment a pretty depressing place so, too, is the New Statesman homepage – Helen sent me a video and ‘suggested’ I write about it. “It always cheers me up,” she said. “I defy you to watch it without laughing out loud.”

Summer reflection: the silence of the seabirds

In northern Italy, the sound of the swirling river suffuses even my hotel room

Helen may have been wrong in her suggestion that I had a choice about whether to write about the video. But she was entirely correct about the difficulty of watching it without laughing so hard that it made me grateful that “weak bladder” is not currently numbered among the symptoms of my growing decrepitude because oh my fucking god you have to watch this right now, it’s amazing.

The video comes from a BBC science documentary called, Neanderthal: The Rebirth. It uses what was, c2005, the latest science, to make the argument that Neanderthals – the hairy, thickset, aggressive-looking sub-species of humans, who all look like they really, really like football, lager and growling, and who died out about 40,000 years ago – all sounded like Elmo from Sesame Street after a night on the helium.

What I most like about this bit of film is how seriously everyone involved appears to be taking this ridiculous activity they’ve engaged in in the name of science. The voiceover betrays not a hint that what you are about to see is in any way funny. Patsy Rodenburg, of the Guildhall School of Music & Drama, asks actor Elliot to say the numbers, “One, two, three” in a succession of ever sillier voices. Elliot – a young man clearly trying to hold back the moment when he is forced to accept that this BBC documentary is not, in fact, his big break; that a stint playing Hamlet at the National is no more likely now than it was before he started reading up about Neanderthals – complies, a look of intense concentration on his face throughout. He raises his voice higher. He braces himself. He pretends not to have a neck. 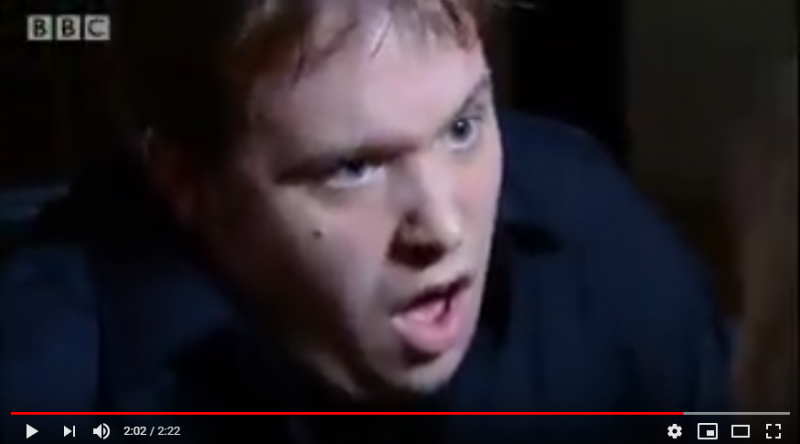 “I’m gonna be on telly, mum! No, even better than Hollyoaks!”

This whole scenario seemed oddly familiar. Not just the silly voices (though, obviously, the silly voices); but also the serious expressions on the faces of all concerned, and the gradual escalation of both silliness and volume. It made me think of Terry Jones.

And then it hit me. It’s literally that Monty Python sketch where a man in a suit is trying to report a burglary, only nobody can hear him unless he does it using a series of increasingly ridiculous voices. Only this isn’t a sketch troupe, it’s a literal BBC documentary programme, with scientists and a graphics budget and everything. Patsy and Elliot are living in a Monty Python sketch, and nobody’s bloody told them.

Anyway: we’ve all had some fun, but we’ve learned a little something, too. And what we’ve learned is that, while Neanderthals may have looked hyper-masculine, they all sounded like Bluebottle off The Goon Show. Amazing what they can do with science, isn’t it?

If you have come across something that might bring me a momentary flash of joy in this awful, awful, world then please god email it to me as soon as humanly possible.