Can you be homesick for a place that is nobody’s home? The polar explorer and climate scientist Felicity Aston is sure that you can. In the same way as you or I might yearn for the house we grew up in or the town where our school was, Aston hankers for the frozen wastes of Antarctica. When she was 23, she got her first “proper job”, as a meteorologist at the Rothera Research Station on Adelaide Island, near the tip of the Antarctic Peninsula, and spent three years working there. It changed her.

More than ten years later, the place still has a powerful hold over her. “You see the good weather, the bad weather; you see it in darkness, in light, in moonlight, in sunshine; you see it on days when you love it and days when you hate it,” she explains. “I know it’s a bit of a cheek to try to call Antarctica your home but it is somewhere that I have just endless fondness for.”

In 2012, Aston became the first woman to ski alone across Antarctica – a fact she says she found out only later, when a journalist pointed it out to her. “Firsts are important because they give you the platform . . . But for me, the motivation was not necessarily to stamp a ‘first’ on my forehead. It was all about the journey – my life so far has been quite woven up with Antarctica.” 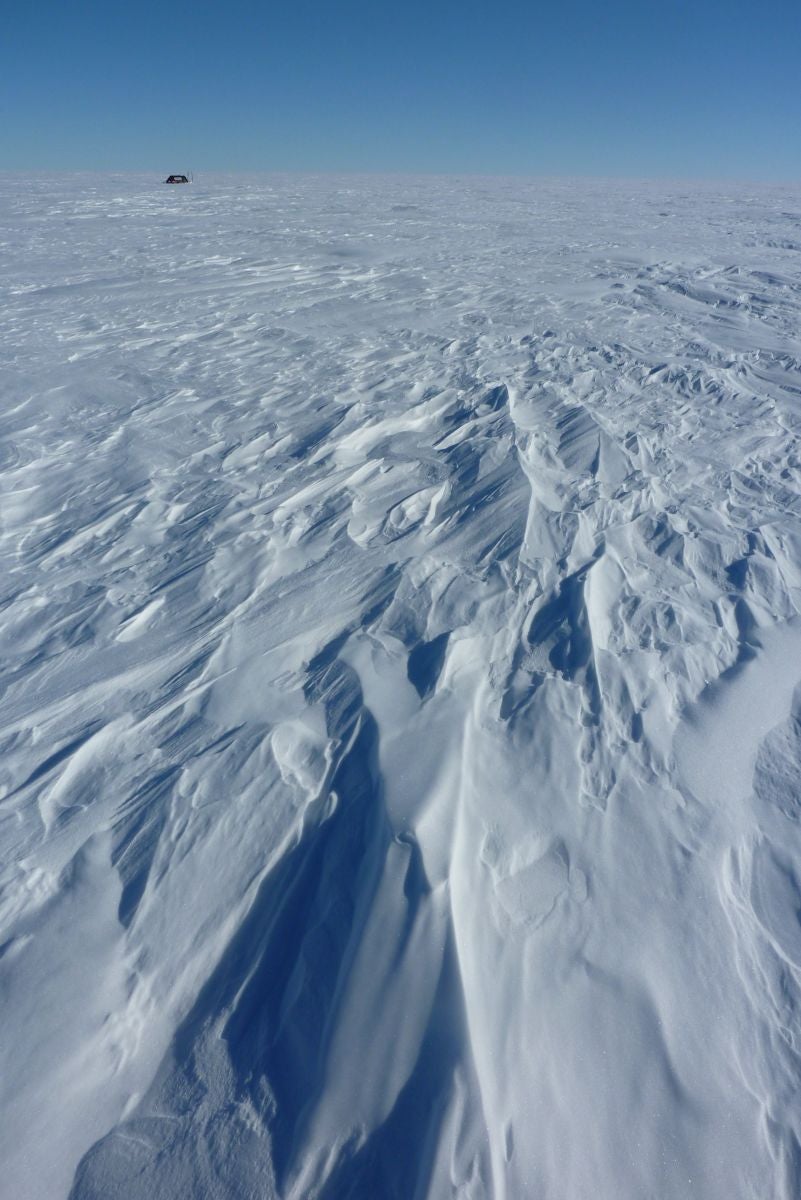 David Attenborough’s Green Planet is a necessary watch this January

Anthrax in the Arctic: why wolves are the least of a reindeer’s worries this Christmas

Sasatrugi, formed by wind erosion, on the Antarctic ice. Felicity’s tent can be seen in the background. Photograph: Felicity Aston

As an experienced explorer – she had previously raced to the South Pole and across Arctic Canada – she knew the physical challenges of the expedition. What took her completely by surprise was her emotional reaction to the perpetual solitude out on the ice. She cried – and not just as she watched the plane that had dropped her off disappear over the horizon. She blubbed, sobbed and wailed her way across crevasses, up glaciers and through mountain passes. As someone who had always enjoyed her own company, she was scared by the way she reacted. “At first, I was physically shaking, my heart was going, I was out of breath – and yet I knew I had to get over it somehow.”

Even finding the motivation to leave the tent each morning was an emotionally draining experience. “One minute, I’d just be focusing on making my coffee; the next minute, I’d be bursting into tears and talking to myself, then I’d be angry with myself.”

She wept so much on her journey that when it came to writing about it afterwards she was worried that she sounded like “some kind of hysterical, melodramatic woman” (the only other explorers to make solo journeys across Antarctica are two Norwegian men).

Explorers often give the impression that they are always looking for something more extreme to conquer – a higher peak to scale or a bigger desert to cross. Yet Aston feels satisfied that she has reached her limit.

“I’ve felt a certain amount of freedom since coming back,” she says. “I could keep pushing; I could do something twice as long, or twice as difficult. But for me there would be little point, because I’ve got the answers I wanted.”

Alone in Antarctica by Felicity Aston is out now (Summersdale, £8.99)