In February, a few days before Valentine’s Day, over 1000 people in the UK headed out to watch a heavy metal band that, just months before, had taken the internet by storm. In Camden’s Electric Ballroom, middle-aged metalheads united with east London art-types to pay homage to the band of the moment: the Hu.

The band only sang in Mongolian, mixing metal with the ancient art of throat singing. The fact that they didn’t sing or speak in English didn’t seem to matter much: heavy metal has a way of connecting a crowd.

The Hu, known for their sudden smash hit “Yuve Yuve Yu”, have been streamed 10 million times on Spotify and gained over 40 million YouTube views; that’s 20 million more views than Stormzy and Ed Sheeran’s latest joint hit, “Own It”.

The Hu’s second biggest song, “Wolf Totem”, hit 28 million views before they had even released their first album, making them the first Mongolian band to top a billboard chart. Seemingly out of nowhere, the Hu pierced through the global mainstream with their genre-bending rock. How?

“When we put up the videos for ‘Yuve Yuve Yu’ and ‘Wolf Totem’, people organically found them and responded to them. We’re very blessed the world noticed us and liked us,” says the band’s lead throat singer, Gala. “Everywhere we go our fans chant with us, they sing with us and they mosh with us. We were surprised in the beginning, then after playing so many great cities in the UK we understood why they love us. UK audiences are super responsive to good music.” 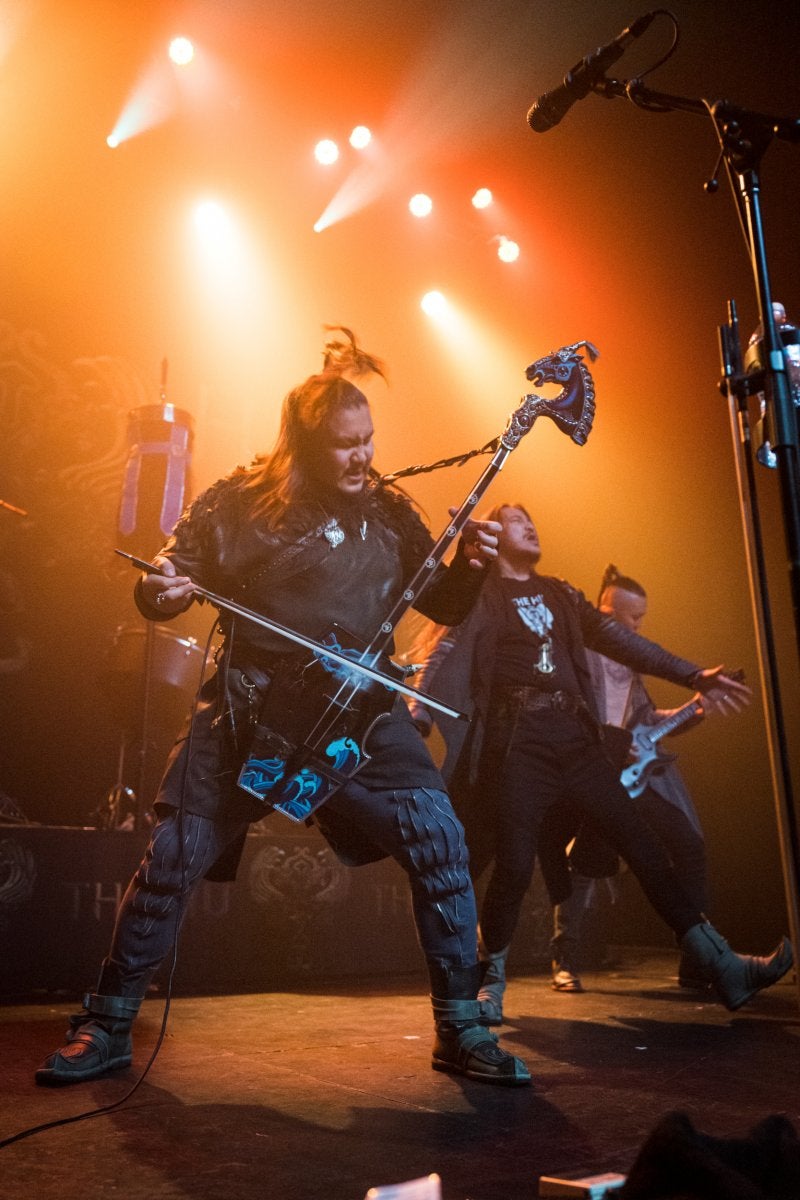 The four members of the band, Gala, Enkush, Jaya and Temka, have known each other for more than a decade. As kids, they all studied folk music, becoming friends on the Mongolian folk scene. All four grew up listening to the likes of Metallica, Slipknot and Led Zeppelin. “We always loved rock music because Mongolian traditional music itself has so many rock elements in it,” Gala tells me.

For Gala and the band, throat singing – a type of sound that creates the upper and lower harmony together – is the key to their international success. “It has been a Mongol technique for generations. Our grandfathers, fathers, mentors always did it. We genuinely respected that it came from our ancestors and wanted to respect and honour them while attempting to master the technique,” says Gala.

“We practiced this style for years since we were kids to be able to control it, apply it and now we’re infusing it into our songs because it feels natural to us. It’s who we are, it’s what we know, it’s where we come from.

“It comes from an honest human place that we’re proud of and comfortable with. It’s the truest form and method for us to deliver our message in the sincerest way.”

The Hu’s success is bucking a wider trend. At the 2018 Grammys, the awards ceremony didn’t even bother to televise the announcement of its rock category winners. Since the mid-Noughties, rock has been dying a silent death. Why? “Rock needed something new and unique,” says Gala. “The legendary bands like The Beatles, Rolling Stones, Iron Maiden and Metallica always brought something new to the table. We believe that the new rock bands with original unique sounds will bring back rock to the front seat.”

But as well as fighting for the new, memories of Mongolia’s past are not far from the band’s central image. The Hu’s lyrics frequently lean into Mongolian nationalism. In fact, their fourth single is titled “The Great Chinggis Khaan”. In May 2019, before their first album The Gereg was released, the group was invited to meet Mongolia’s president, who thanked them for promoting the country internationally. In November, the state awarded them the highest state decoration of Mongolia: the Chinggis Khaan Order.

“Although we sing about Mongolian culture and history, our message itself is very universal. We’d like to remind [our fans of] the importance of showing gratitude to your parents, loving your homeland, protecting nature, loving and respecting women, respecting your history and ancestors,” says Gala. “Hu is the root word for a human being in the Mongolian language. We chose this name because of the inclusive nature of the word. We want people all around the world to be united and stand against injustices.”

In September 2019, the band finally released their first album and two blockbuster music videos, directed by their producer Dashka. The videos for “Yuve Yuve Yu” and “Wolf Totem” could be straight out of a Mongolian tourism campaign, the dramatic valleys of the landscape taking center stage.

“We traveled over 5,000 kilometers on off roads to western Mongolia to film ‘Yuve Yuve Yu’ . There were times when we got so hot in the desert and the next day we froze on a mountain top. We’re pleased with the reactions of people all around the world.”

The group are currently stranded in Australia, unable to return home from their global gig dates due to coronavirus travel restrictions. But the band is ready for the next chapter. “We want to keep doing what we’re doing,” says Gala. “We want to leave a global mark of our music around the world.”