We are living in the age of humans – that much is certain. The Anthropocene, the current geological epoch, which scientists say began around 1950, is defined by human impact on the Earth. Our destructive presence is so profound that after 12,000 years of stable climate since the last ice age, during which all human civilisation developed, the Holocene gave way to a new era.

And so, on her fifth album, out today on 4AD, Grimes declares herself Miss Anthropocene, purveyor of all havoc that humans have wreaked on Earth: an abundance of carbon dioxide emissions; the global mass extinction of species; rising sea levels; plastic pollution; the transformation of land by development and deforestation. It is, Grimes has said, “an evil album about how great climate change is”.

Miss Anthropocene is a villainous character (one of many at play on the record) who is timely not just because of the climate crisis, but because of the place in which the conceptual art-pop musician currently finds herself. Since 2018, when she made public her relationship with Elon Musk – the CEO of the electric vehicle company Tesla and the aerospace company SpaceX who has plans to send one million people to colonise Mars by 2050 – Grimes has seen her media image switch “from Tumblr hero to supervillain”. But, Miss Anthropocene shows, it isn’t fazing her – much like Taylor Swift’s pivot to ruthlessness on her sixth album Reputation, Grimes has used her newfound notoriety as a springboard for her creative vision. “If I’m stuck being a villain, I want to pursue villainy artistically,” she told Crack in April last year. 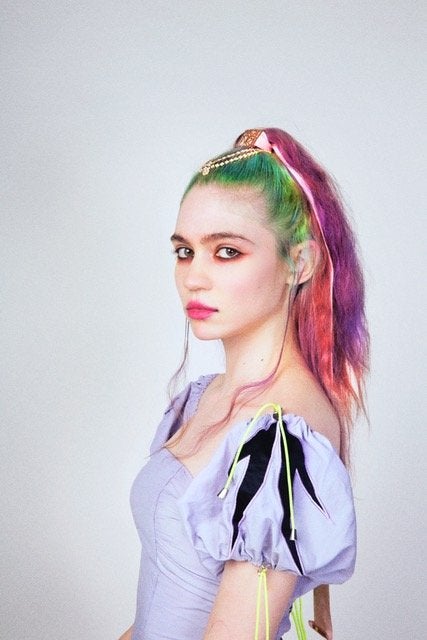 Born Claire Boucher in Vancouver, Grimes emerged in 2007 playing noisy electronica and hanging out on MySpace and Tumblr, on which she shared inspirations and extensive research “like a mad pop scientist”. Her third album Visions (2012) thrust her under the indie spotlight and in 2014 Pitchfork named her upbeat yet haunting album track “Oblivion” the best song of the decade so far. Most impressively, Grimes was achieving commercial success while retaining complete artistic freedom, producing her own music, directing her own videos and drawing her own artwork, her aesthetic influenced by Japanese Manga and gothic utopias but remaining her own distinct fantastical vision.

Grimes marked herself out as explicitly liberal. In a since-deleted 2013 Tumblr manifesto – long before #MeToo – she called for an end to misogyny, to people touching her without consent at gigs or on the street, to “creeps on message boards discussing whether or not they’d ‘fuck’ me”. Environmentally conscious before it was trendy, she banned plastic water bottles on her tour bus as early as 2015. In 2017, when Donald Trump announced a travel ban on seven predominantly Muslim countries, she promised to match all donations to the Council on American-Islamic Relations up to $10,000.

Come 2018, left-leaning fans who revered the unconventional musician were unsurprisingly shocked by her relationship with Musk, a multi-billionaire and regular donor to the Republican Party. (Though, writing in the New Yorker, Naomi Fry wisely pointed out that in a social media-dominated era where we consume contrasting news stories in quick succession, “the weirdness of a union-busting billionaire with neo-colonial leanings suddenly dating a quirky Canadian musician who, until recently, had “anti-imperialist” in her Twitter bio makes a certain kind of sense.”) Since then, Grimes, her relationship and her recently announced pregnancy have been the subject of relentless criticism and speculation from both fans and the media.

Miss Anthropocene might just be the album that saves Grimes. It’s not that perception of her musical ability needs to be saved; musically, she hasn’t put a foot wrong. Her previous album, 2015’s Art Angels, was a ferociously accomplished record which merged hip-hop beats with electronic glitches and garnered universal acclaim. But among the tabloid exposure that she is now acquainted with (in the Daily Mail, she is “Elon Musk’s girlfriend”), former Grimes fans may need to be reminded that she is still a formidable and relentlessly talented artist, whatever is happening in her personal life.

“So Heavy I Fell Through the Earth”, the album’s opening track, is spacey to the extreme, weighed down with an utter impossibility of movement as a result of love. It is seductive in its slowness, emphatically so compared to the buoyancy of so much of Art Angels, though it retains Grimes’s signature high-pitched vocals that lie back behind Eighties synths. The album’s closer, “IDORU” – a name which brings with it echoes of aidoru, a Japanese “idol” or manufactured entertainer, and a slurred rendition of “I adore you” – is also a love song. But it’s a lighter take on adoration, as this time Grimes does not allow herself to sink, but instead hovers in a dream-like expanse, even, with a typical girlishness, singing, “We could play a beautiful game / You could chase me down the lane”.

Grimes’s most admirable gift is her ability to express one sensation from numerous angles. While other songwriters in the same position would trip over themselves for fear of contradiction, Grimes’s multiplicity, her willingness to slip between moods even sometimes in single songs, is her strongest asset – so long as she remains sincere. “4ÆM” opens with percussion which conjures up a calming rainforest, wide green leaves sheltering you from an onslaught of rain. Soon you realise you’re moving at a club-ready 180bpm, and Grimes is muttering something about the baby and getting sick at 4am, a charmingly frantic musician back, after five years and just the flick of a switch, to her usual mischief – even if themes of pre-motherhood now lurk beneath the surface.

The burgeoning “Before the Fever” and nu-metal-inflicted “My Name is Dark” are the most obviously villainous tracks. “This is the sound of the end of the world”, sings Grimes as Miss Anthropocene on the former – and she doesn’t sound unhappy about it. She has said she wanted the reverb-heavy latter to “sound like roaring beasts, like Leviathan in the midst”. It’s certainly about destruction, but seems more concerned with self-inflicted human disaster than the collapse of the planet. “The song was originally titled: ‘That’s what the drugs are for’”, she said in a lyric interview with Genius, “And then I was informed that I could not keep that title.” It would seem the end of Grimes’s world isn’t just concerned with the doom of humankind – she fears having to relinquish complete creative control just as much.

For all this turmoil, Miss Anthropocene manages to be the sound of an artist who is content in knowing her personal and musical worth. She may have declared it a bigger comment on the state of the world, but the manufacture of an explicitly villainous persona also exposes Grimes’s personal demons. “Lately I just turn ’em into reasons and excuses” sings Grimes on “Delete Forever”, an electro-Western song about the opioid crisis written on the night of rapper Lil Peep’s death. If the resulting songs are this expertly crafted, I’ll welcome many more reasons, many more excuses.