On a grey winter afternoon, two men sit at a table in the empty bar of London Bridge’s Omeara. Jack Steadman, in circular glasses and a Patagonia raincoat, is folding away his copy of the Guardian. Jamie MacColl, in a mustard cord shirt and Doc Martens, has just finished some street food from the market next door. The pair, who together make up half of Bombay Bicycle Club, sip glasses of tap water to a soundtrack of the rumble of trains on the tracks overhead.

The last time we heard from Bombay Bicycle Club, they’d gone out on a high. 2014’s So Long, See You Tomorrow, their fourth album, was their first to reach number one. Their final show before they announced a hiatus in January 2016 was also the last ever gig at London’s 19,000-capacity Earl’s Court – a historic, confetti-fuelled moment before the bulldozers came in to flatten 40 years of rock history.

The thrill of being a teenage Bombay fan lay in their unwillingness to sit still within any one genre. With each new album, their sound evolved, from the dancefloor indie of 2008’s I Had the Blues But I Shook Them Loose, through the pared-back folk of Flaws, to the eclectic pop-ready A Different Kind of Fix and the international eclecticism of So Long, See You Tomorrow, which featured Bollywood samples and enthusiastic percussion. “It felt like we were pushing the boat out and doing things that other bands in our world weren’t doing,” says MacColl, slipping on his rose-tinted glasses. This regular metamorphosis allowed the band to make their way “out of the wreckage of late 2000s indie music, and carry on doing it and staying relevant.”

Six years later, their return from hiatus to release Everything Else Has Gone Wrong (out on Mmm… Records this Friday) begs the question: what musical world do they exist in now? Very few of their indie peers, bands such as Bloc Party or the Maccabees – who also released early tracks on the now-defunct MySpace and starred on the cover of the NME, which no longer exists in print – are still releasing music in 2020.

“There was a lot of landfill indie then,” says MacColl, who admits to having a chip on his shoulder about the way the band were first perceived. “We got thrown in with that at the time, in a way I see as unfairly. I still see comments to the effect that we’re the enemy of Pigeon Detectives – not that there’s necessarily anything wrong with those bands.”

“We have always had this desire to prove to people that we’re not just one of those indie bands,” adds Steadman, just as disdainfully. He justifies himself: “I think that’s a positive thing for a band to have, because it keeps you going. If you spend your whole career just self-assured and everyone being like, ‘Oh you can’t do anything wrong, you’re the greatest,’ how do you keep making music?” 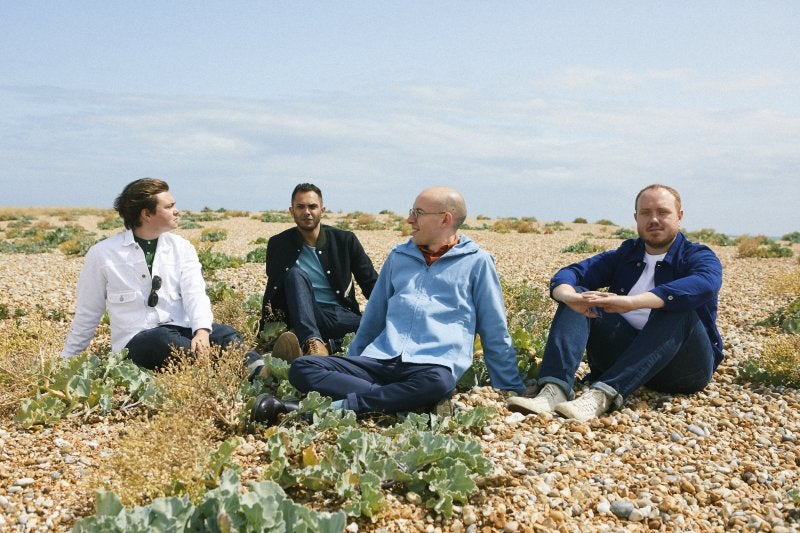 It’s not only this attitude that set Bombay Bicycle Club apart; from the beginning, there seemed to be something in the band’s very make-up that ensured they took themselves especially seriously. MacColl, the band’s guitarist, who is the grandson of Ewan MacColl and Peggy Seeger, great-nephew of Pete Seeger, and nephew of Kirsty MacColl, had on his shoulders the weight of a worthy folk past, though today he is careful not to be stuck in it: “My great-uncle said that all art should be political. I don’t agree with that.” Steadman, made out to be an introspective, tech-loving genius by media snippets such as NME’s “The Sample Life” video, was, as a frontman, typically withdrawn and more than a little “alternative”. His 2017 solo album as Mr Jukes, which “got a lot of sampling ideas off my chest,” was conceived as he travelled on a cargo ship from China to Canada, the experience of crate-digging in Tokyo’s jazz kissaten (jazz cafes) fuelling his writing.

Today, MacColl remains the more outgoing of the pair, laughing readily and raucously and making jokes at the expense of Steadman, who, though the band’s lead songwriter, is more cautious about his words. In their hiatus period, MacColl studied for a degree in war studies and then a masters in international relations. “Jack is doing a part-time degree as well which he likes to keep on the down-low, so I’ll embarrass him now,” he jibes. Steadman rolls his eyes. “It’s in astronomy. Open University.” Steadman is insistent that he doesn’t listen to pop music (“I’m not exaggerating when I say I don’t listen to music that has words at the moment”), while MacColl – whose turn it is to roll his eyes – calls him out for “downplaying” his interest in contemporary releases. When Steadman refers to a documentary on Ed Sheeran’s songwriting method, MacColl interrupts him, bursting into laughter – “I would never have thought you’d watch that!” – and Steadman reaches for an excuse: “Someone made me.”

MacColl is now 30; Steadman, like bassist Ed Nash and drummer Suren de Saram, is 29. Their time off, the first real break from the band since they were 15, allowed them to “establish our own personal identities outside of Bombay Bicycle Club”, says MacColl. “We had to exist outside of the band and grow up a bit.”

Everything Else Has Gone Wrong is then, inevitably, about getting older. “It’s about the stress and anxiety which comes after a bit of soul-searching, rather than just all your anxiety being about girls,” says Steadman.

“There are a couple of songs that feel quite millennial to me,” adds MacColl, “like ‘Good Day’, which is very much about the anxiety of being in your late twenties and questioning the choices you’ve made up till now. That’s something that’s been quite a powerful force among my friends over the last couple of years.”

If the jubilance of I Had the Blues But I Shook Them Loose had teenagers jumping up and down to the anthemic “Always Like This”, Everything Else Has Gone Wrong has its listeners taking a more reflective stance. For fans who have followed the quartet since the beginning, and who, in much the same way as Harry Potter readers, have grown up in step with the members themselves, MacColl has one thing to say: “I want them to know it’s a safe space for male pattern baldness!” When Steadman reappeared as Mr Jukes in 2017, he was completely bald; hairlessness has, on this record, become a tangible way for the band to explore the ageing process – even if it’s sung about in a more sombre way than MacColl discusses it. On “Good Day”, Steadman sings, gently, “First my looks and now my friends / Day by day I’m losing them / Losing them / Losing collagen / Losing elastin.” As he moves into the chorus, Steadman’s soft falsetto is doubled, a sweet harmony filling out an otherwise mellow tune.

“This is certainly one of the more minimal albums we’ve made, particularly after the last two,” says Steadman. On So Long…, he admits, “You can hear us pushing it to the limit of how many samples and how many elements you can make fit on a Bombay Bicycle Club album. I think we took is as far as it could go.” By comparison, Everything Else Has Gone Wrong’s sparsity enables its maturity. Their comeback single “Eat Sleep Wake” might be filled with spacious fuzzy guitars, but the song’s cyclical presence keeps it self-assured. On “Do You Feel Loved?”, a recurring synth melody picks out a complex tune underneath Steadman’s vocals, but the clarity of its tone prevents any unwarranted sonic confusion.

The lyrics on this record aren’t so shrouded in layers either – they’re more direct and personal than Steadman’s previous efforts which have, more often than not, seemed to aim for obscurity. The origins of the title track, which tackles the subject of lyric-writing, goes some way to explaining this earlier vagueness, even if, coming from someone whose primary job title is “songwriter”, its very reckoning sounds contradictory:

“When I wrote that song, it was about, for my whole life, not being very good at getting my feelings across by talking to people,” says Steadman. “I’ve always struggled with stringing sentences together. I’ve always been really insecure about my vocabulary. But, luckily, from adolescence, I’ve been writing music. I think without that I’d be really depressed. The idea that you can’t express yourself is a horrible one. So, ironically, for a song with quite dense lyrics, it’s about writing music rather than words to express your feelings. It could have been an instrumental song, but then no one would understand!”

It seems unlikely MacColl would have allowed it to be instrumental. “I felt like it was my personal battle to get lyrics to matter more on this record,” he says. Steadman has always been the band’s chief songwriter. He says MacColl has always been his “best critic”, while MacColl is glad that Steadman is “more open-minded” about collaborating now. For the first time, the band discussed Steadman’s lyrics together, if only because of “sheer force of will on my part,” says MacColl, laughing, if not out of genuine amusement then out of fear of a rebuttal.

Bombay Bicycle Club fans have never known what to expect next from the band. “It’s a testament to our fan base that they’ve stuck with us through all those different styles. They obviously have quite eclectic music tastes,” Steadman says.

“I’m still very ambitious. But I think it’s dangerous to come back and still think you exist in the world that carried on when you stopped,” he suggests, in what is a rare moment of genuine modesty. “You constantly have to slap yourself in the face and remind yourself that.”