When Elizabeth Bernholz and her husband Jez, both musicians, moved from Brighton to rural Leicestershire, they knew to expect change. The couple, used to living in a “very friendly, arty, liberal city”, but forced to move for financial reasons, had to ask themselves: “can we exist in a place that isn’t really us? Will our identity still be intact?”

After their son, Ezra, was born, Bernholz would take him to local playgroups and for walks in the park. “In most cases, it was all very ‘ho hum, hello, how’s your dog? Nice weather!’”, she says. “On the other hand, I would overhear conversations and start to hear the darkness creeping out – embedded xenophobia, embedded racism that unfortunately, in a conservative area, seems to be very standard.” In public, Bernholz would smile and nod along. Then she would go home and “write incredibly aggressive, loud music to go and let off a bit of steam”.

The music produced as a result of her pent-up anger made its way onto Pastoral, Bernholz’s third album as Gazelle Twin. A record which throbs with the rage of Brexit Britain, while reaching far back in time to village folklore with recorders, harpsichords and old vernaculars, Pastoral was named The Quietus’s Album of 2018. As Gazelle Twin, Bernholz performs as a “freakish imp”, kitted out in red Adidas sports gear, trainers and long socks, with a clown-like white collar and her face completely covered, the latter allowing her a “virtual reality experience”.

“Do your neighbours know that you regularly get on stage with a pair of tights over your head?” I ask, when we meet in the bar of a hotel close to London’s St Pancras. “Some of them do,” she grins, “but only very few. I tend not to talk about what I do at all, because it’s too complicated and I wouldn’t want to terrify any children. I live two lives, but I actually quite enjoy that.”

Sitting in between us, sipping Earl Grey, is multi-disciplinary choreographer Imogen Knight. Among other roles, she is movement director of NYX, a London-based drone choir – a group of vocalists who, rather than sing lyrics, use their voices to produce long drone-like sounds, “ahhs”, “uhhs” and other non-verbal frequencies. NYX will collaborate with Gazelle Twin for a joint performance at EFG London Jazz Festival on 20 November, the second iteration of a live collaboration they first performed at Oval Space last year. The show, which takes cues from Pastoral and is woven together with distorted hymns, a section from The Wicker Man, and a new operatic drone piece, is called “Deep England” – a nod to the darkness Bernholz found herself surrounded in when she ventured away from Brighton’s liberal metropolis.

Formed in a small north London studio by vocalist and composer Sian O’Gorman, NYX (pronounced “nix”) includes eight members – trained opera singers, contemporary musicians and producers – all of whom experiment with synthetic manipulation of their vocals. Using guitar pedals and vocal processors, the ensemble first started with the desire “to create and experiment with vocal sound and performance”, writes O’Gorman over email. “The scope of synthetic manipulation is so huge and constantly expanding – we’re only just getting started with this.”

It is difficult to explain the intensity of NYX’s sound. Deeply human, much like the open-vowelled pagan ritual of Richard Dawson’s songs, it is a forceful reminder of the weight of choral music’s long history, of all the humans who have ever sung. “Voice”, Bernholz says, “is our given instrument. It’s our body, so it has very visceral, very primal effects.” As a solo electronic artist, she relied on her own voice, digitally augmenting her range to form layers. Now, she has a real choir at her disposal. 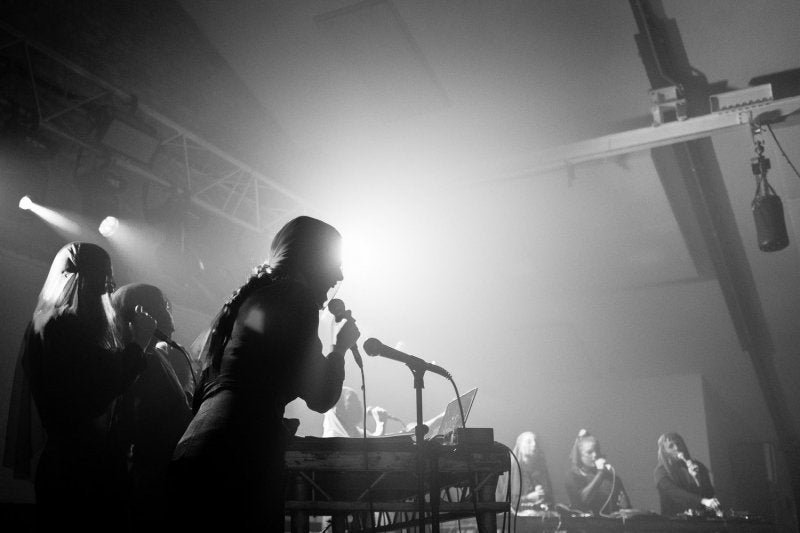 The ancient quality of NYX’s sound is intrinsic to the ensemble. “The layers of chanting and wailing seem to come from somewhere very deep in our bellies,” writes O’Gorman. She directs an “extended vocal technique” attributed to acclaimed composer Meredith Monk, which, for NYX, results in the use of “breath, guttural sounds from the sinuses and throat, testing the corners of our linear ranges, overtoning, mimicking animal sounds, creating vast soundscapes through the caverns of the mouth.”

Knight can’t quite find the right words to describe the effect of a NYX performance. Instead, she raises both hands to shoulder level and jolts her whole body forward, her throat making a creaking noise. “It’s like that. There’s something slightly doily about it. And yet, underneath this doily is this seeping oil. The doily is gently balancing on top of that.”

What Knight might be suggesting is the juxtaposition of prettiness and ugliness. The electronic handling of the choir adds an otherworldly element, expanding the range of possibility with the use of “reversed loops, time-warped vocal fry, and heavily pitch-shifted voice into deep sub-bass,” O’Gorman says. Bernholz, who will join the “posse” onstage, explains how each ensemble member will be controlling their own electronics: “we’re each going into our own system, rather than all going into one, and we’re blending those together. There’s a level of technical understanding and knowledge that is going on that is often associated with men who perform electronic music.”

NYX – and all of their collaborators so far – are female or non-binary, more out of circumstance than for any ideological reason. “What electronics do is create a kind of equality,” says Knight. “It’s amazing how you can get the complete extreme of the human voice from a woman. You don’t need a man there to do the bass.”

“Although each voice is weaving a unique thread to the sound,” says O’Gorman, “the overall essence is the tapestry we are creating, something beyond our individual parts.”

It’s a tapestry of contradictions: human voice and digital manipulation, political aggression and private compassion, rural harmony and secret violence, folk and electronica. It is in the fusing of these contradictions that NYX and Gazelle Twin’s music lies.

“We want to take our audience into the darkest, darkest part of the sea, and then have them wait there and then”, Knight makes a squelching noise, “suck them back out and then…”

“Yeah, exactly, we want to rebirth them.”