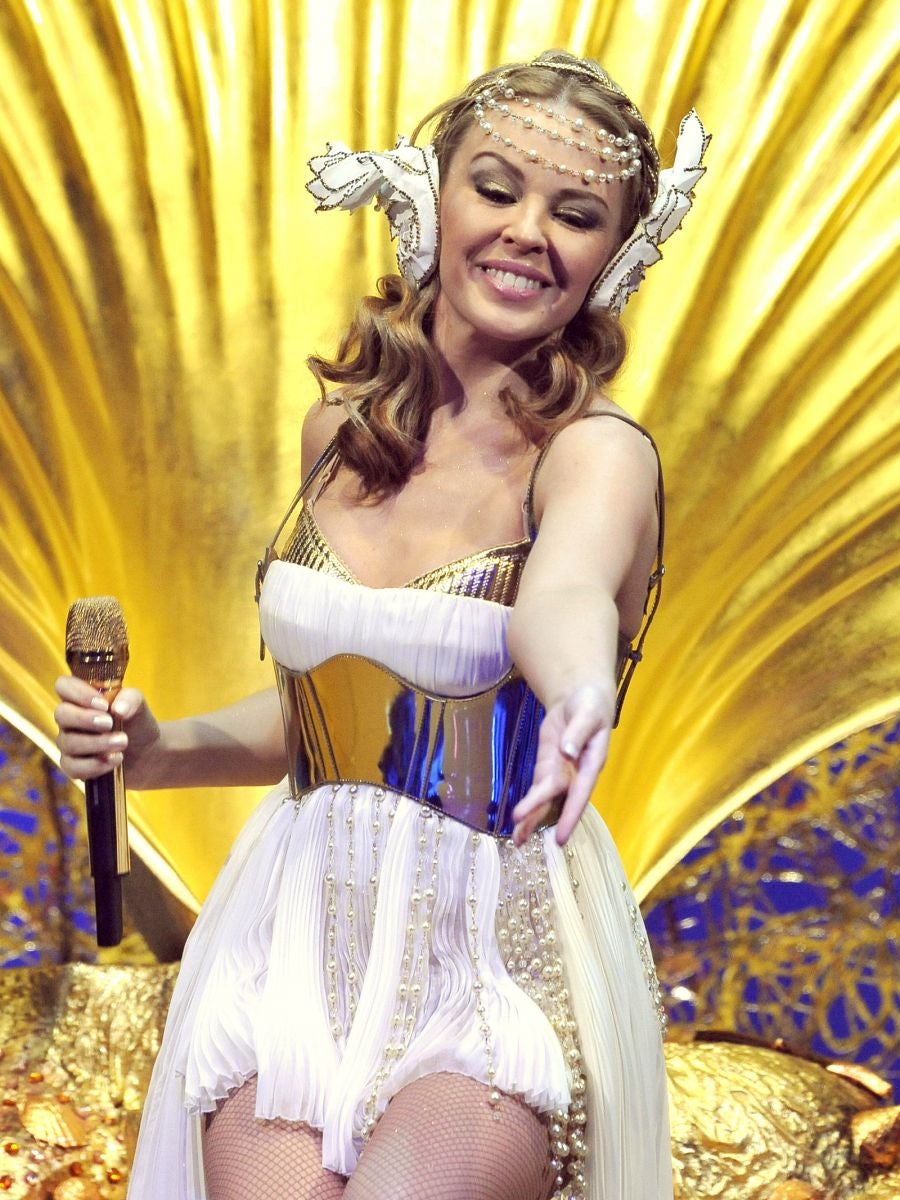 Twenty-seven years is a long time in pop. In 1987 the first Beatles albums made it to compact disc. Whitney Houston was massive-haired, massive-selling and squeaky-clean. That same year, a 19-year-old flew to Britain after an invitation to work with some producers who then forgot they had asked her to come. Hurriedly, they knocked off a song for her in 40 minutes and made her learn it and sing it in an hour. She was gracious, and nailed it first time.

Two months later, “I Should Be So Lucky” was Kylie Minogue’s first number one in Britain. Seventy million record sales later, she is releasing her 12th studio album, Kiss Me Once. Looking at the album artwork,
it’s as if nothing has changed – the radiant, diminutive platinum blonde is still there, her features seemingly made to be spray-painted on the side of a bomber jet.

But things have changed. Forty-six this summer, Minogue is a survivor of breast cancer and a reformed dabbler in Botox; today, she looks like a middle-aged Julie Christie starting to bloom. Pop remains her main creative outlet, which confuses some people; they forget that the genre was born in the Sixties, just as Minogue was, or that pensionable men don’t get criticised for ploughing on with the same shtick in rock.

This has been Minogue’s biggest year in some time. Her new album is her first as a management client of the rapper JAY Z’s Roc Nation roster, and she has had a great reception on the BBC1 talent show The Voice. Not many people could be both a mumsy, warm judge and a hip-hop affiliate and not care about the join. She has also toured her B-sides in recent years and had positive reviews for her role in the French director Leos Carax’s art-house film Holy Motors. All of which suggests the new album might be a more mature work. Instead, it has songs on it called “Sexercize” and “Les Sex”.

Perhaps the most frustrating thing about Minogue is her unwillingness to be pigeonholed. It’s a strategy that also quite neatly protects her real identity.

On a warm weekday afternoon, she sits in a private room above a west London members’ club. I had imagined meeting a shiny wall of bonhomie, a perfect, plastic smile. I get a woman in an artsy black jumper and jeans who makes lots of warm, thespy faces, using an anorak over her knees as “a nanny blanket”. Each week she flies to Australia to judge their version of The Voice, she explains, while trying to sort out her album launch here. “And I’m really trying to make sure – this is very boring – that I keep warm and eat enough to get sustenance. If I get a cold, that’s it; a complete spanner in the works.” This isn’t the patter of Lady Gaga or Madonna.

Perhaps that is partly because Minogue is an adopted Brit. That 1987 trip to the London pop powerhouse of Stock, Aitken and Waterman, at a time when her star was rising in the Australian soap Neighbours, had a lasting effect, she says – she has more or less lived in the UK since then. “At that age in your life when you are separating from your family, becoming independent and becoming your own person, I happened to be here. I was just absorbing all the culture, as much as I could, around me at the time.” There is a distinct melancholy here; a yearning for that time. “Maybe that feeling’s why I stayed, in some ways.”

Minogue may feel an affiliation to Britain because half of her family is Welsh. Her mother, Carol Ann Jones, born in Maesteg, South Wales, became a Ten Pound “plastic Pom” when her family emigrated in the Fifties. Minogue’s grandmother Millie, known in the correct Welsh terminology as Nain, is still flourishing in Melbourne at the age of 94, and her granddaughter still has a drink with relatives whenever she plays over the Severn. “I really do! It’s one of my great regrets that I can’t do a Welsh accent.” She tries and fails, valiantly, to say “thank you” in Welsh. “Or, er, Llanfairpwll . . . argh . . . five-days-later-go-go-goch.” She rolls her eyes. “Oh dear.”

A half-hour in Minogue’s company is like being in a charm factory, but not in a clinical way. Funny and polite, apologising for interrupting your questions, she thanks you for doing your research. I am reminded of that girl recording “I Should Be So Lucky” in an hour. One presumes that graft, and attitude, are the reasons why she’s still here.

This approach also explains why it’s hard to think of her as an artist. Artists curate their lives cleverly, managing the way the world sees them. Minogue’s career trajectory is altogether messier. She’s the pearly-toothed pop star who broke up with Jason Donovan to date Michael Hutchence, the front man of INXS, whose later death by hanging was surrounded by rumours of fetishism. She was the pale-skinned focus of a 1995 murder ballad by Nick Cave, “Where the Wild Roses Grow”, but is better known for accompanying a song about nothing more profound than “spinning around” with shakes of her shimmery-gold hot-panted behind.

Does Minogue regret not shaping her career more elegantly? “Oh God, no. That’s my idea of torture.” Why? “Why not? I even used to hate it during Neighbours, when people would say to me, ‘Well, you can’t be a singer; you’re an actress.’ I’d be all, ‘What planet are you living on?’ ” She’s sitting up straight now. “I’d think, ‘What do you mean? Are you saying that, as an actress, I can only play one role?’ Isn’t that the point of being an actress – or rather, the point of being a person – that you do different things?” She shakes her head. “I couldn’t do anything else.”

In the past she has been advised by people around her not to do certain things – but she’s often ignored them. In 1996 Sam Taylor-Wood asked her if she would appear in a short film called Misfit, miming to the last known recording of a famed castrato. “That was before Sam Taylor-Wood was Sam Taylor-Wood,” she points out. “But I thought, ‘Yeah, it’s an interesting idea. Let’s do it.’ ”

Yet she won’t knock the poppier, sexy side of her work. She recalls wearing suits and little make-up around the time of her 1994 album, Kylie Minogue. One morning she woke up and knew that it wasn’t really her. “I thought, ‘What am I doing this for? It’s not who I am.’ It’s not right if you’re a woman who enjoys expressing her sexuality pretending you’re not sexual.” Also, she says by way of a defence against detractors, “I often do these things with a wink.”

This is true: Minogue’s sexuality is often presented in layers of camp; it has a context in reality rather than a sense of distant, dead-eyed objectification. But her move towards becoming a gay icon has had an odd consequence – the primary fan base for this beautiful, sexy woman is one that doesn’t want to have sex with her. 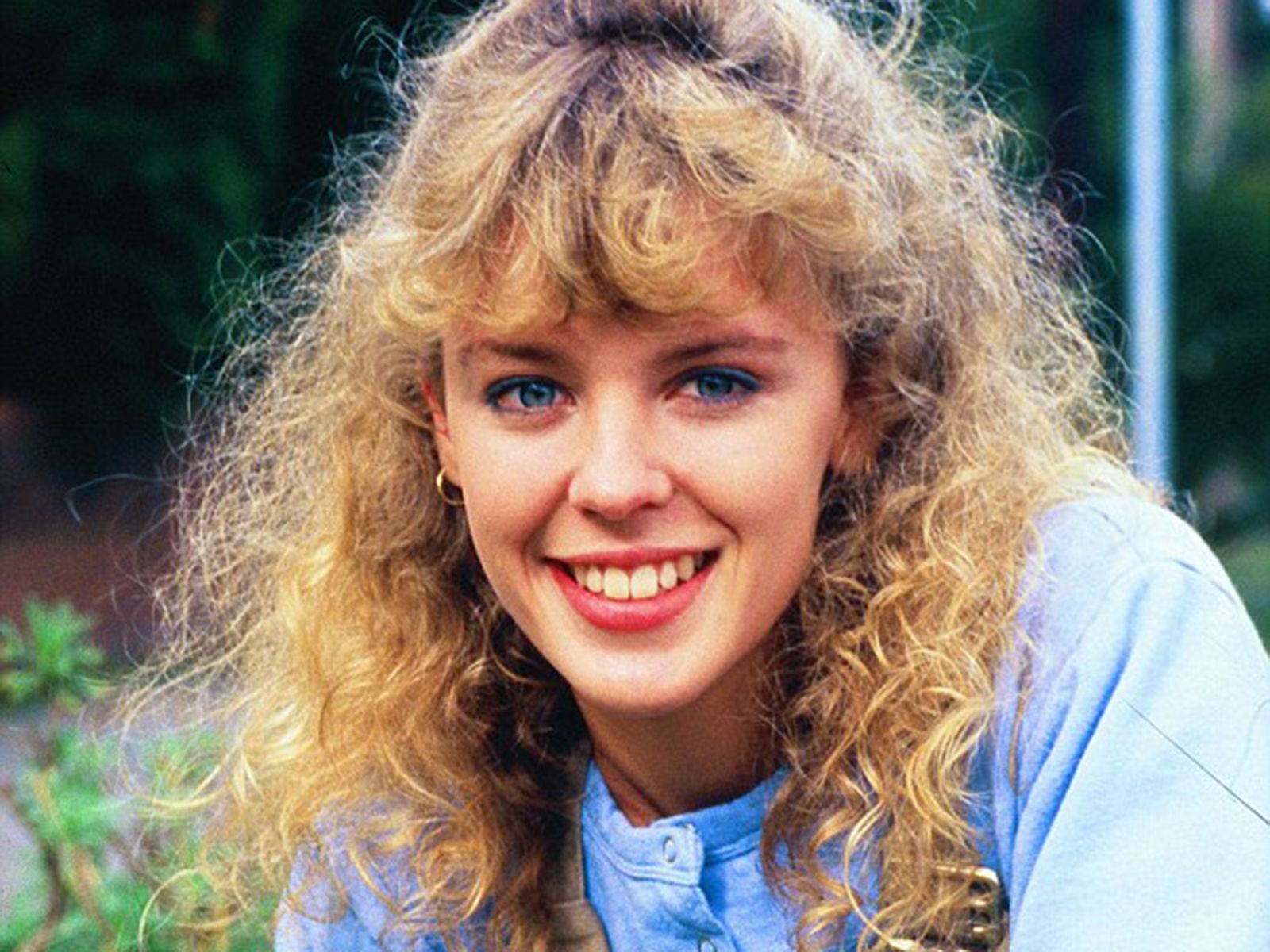 Mechanic next door: Kylie as Charlene Mitchell in Neighbours

What’s that like? She thinks for a while, and smiles. “Well . . . I see what you’re saying. But I guess it’s just been that way for such a long time . . . I don’t know.” She tails off. “I still flirt with those people. I have a ridiculous amount of GBFs [gay best friends]. But, yeah, I guess it’s everything in life but with the sex removed.” She gazes into the distance; it’s a question that she might come back to later, for herself.

What is Kylie Minogue’s feminism? “It’s a tricky one,” she begins, but then implies straight away that it shouldn’t be. “I mean, women should have equal rights in everything – of course they should – but the rest is a minefield. I think it’s important to try and celebrate my femininity, but that’s not for everybody.” She is also a bit sick of being asked what it’s like to be a “woman in music”. I don’t blame her – men are rarely asked to discuss the cultural impact of their bum.

“Also, someone asked me at a press conference how I felt about the gender imbalance on The Voice. I said, ‘Actually, I don’t mind being the only girl there, because you don’t want to be pitted against someone else.’ And then I thought, ‘Well, that’s not fair, either, because it shouldn’t be about getting involved in a dress-off or face-off.” That’s the way tabloid media work, though, I say. Minogue nods, and then shrugs. “Unless you’re a serious philosophical thinker and writer and you think about it a lot . . . You know, I just get on with it.”

Perhaps the only way to get a full measure of her is to pry into the toughest part of her life. In May 2005, while on tour, she was diagnosed with breast cancer; her treatment required eight months of intensive radiotherapy and chemotherapy. During her recovery, her mother was always at her side and they became obsessed, together, with the cult 1975 Maysles brothers film Grey Gardens, about two faded aristocratic sisters living in a crumbling house.

“I had headwear on every day, and me and my mum were just like them, trying not to go crazy,” she laughs. I wonder out loud about the psychological effects of the cancer. “It was like living on another plane for a while,” she says eventually. “I mean, part of your brain’s functioning like normal and the other part is just so shocked and terrified it can’t compute. Also, I’ve always been compassionate, but to have compassion and a first-hand experience of something like that . . . it makes you a very different person.” She nods, lips tight. “I just wish you could jump-cut to that without the experience.”

The start of Minogue’s forties made her more reflective at first, but more daring thereafter. Her last album, The Abbey Road Sessions (2012), was an orchestral rejig of her hits but also included an original composition of hers, “Flower”, written for the child she may never have – another issue she has always had to deal with in interviews. After that cathartic experience, she had a vision. “I know this sounds stupid, but the vision was a horizon with nothing on it. Nothing. Not a thing. That idea made me feel really calm for the first time.”

Soon afterwards she sacked her manager of 27 years – politely – and took up the new offers from Roc Nation and the BBC. The woman who’d been given a second chance at life was despatching her past . . . and giving herself a third.

Minogue spent New Year’s Eve 2013 at home in London, on her own, thinking less about what had gone and more about what was coming. “And I loved it – I didn’t just want to be dragged to a party because I’m supposed to go to a party. Something had woken me up, so I wanted to stop and take a few breaths.” Which sounds to me a little like a pop star growing up at last. She gives the answer I knew she would: “Perhaps . . . but also, never!”

“Kiss Me Once” is out now on Warner Brothers Records