Sometimes I ask myself in all sincerity – is Richard Branson real? Please note, the question is not “Is Richard Branson for real?” (the sort of locution he himself might have used back in the days when he edited Student), but rather: “Does he exist in any meaningful sense at all?”

I continue to ask myself this question even though I have actually met Branson and shaken him by the hand. Seeing wasn’t believing – nor, it appears, was touching; Branson will have to work much harder than Jesus Christ, for instance, if he wants me to lend him any credence, let alone have faith in his heavenly transport. True, he does have important similarities to the Christ: both are depicted as bearded and long-haired; both are fair-skinned; both have a message for all of mankind. But in Branson’s favour: although I have only hearsay to go on when it comes to Christ’s catering, I have feasted on Virginal loaves and fishes many times.

All of this flashed through my mind the other day when a steward plonked a complementary Virgin snack box down on the Virgin table in front of me, and then strode on along the carriage of the 12.35 Virgin Trains service from Manchester Piccadilly to London Euston. “Wow,” I said to Barry Sheerman, the MP for Huddersfield, who’d come looking for the steward and found me instead, “that’s a hell of a snack box.”

And indeed it was: a foursquare little thing, its flimsy cardboard manifold cleverly printed with trompe l’oeil wickerwork, leather luggage labels and handle so that it resembled a miniature picnic hamper. I knew that as far as Barry was concerned fakery was the order of the day, because when he’d clapped eyes on me he said: “You’re an actor, aren’t you?” I had to spend some time disabusing him – after which we both had to spend a lot more time chatting, because Barry was taught by my dad at the London School of Economics, back in the days when there went out from Caesar Augustus a decree that all the world should be taxed.

The sad homogeneity of the “easy peeler”

What our obsession with washing-up bowls says about the UK

To me the pseudo picnic box was yet more evidence of Branson’s unreality, and yet Barry believed the Virgin Richard’s corporeality was evidenced by a simple fact: “You realise he’s won the East Coast Line franchise, don’t you?” I did indeed know that, but I was still worshipping the iconic snack box, and although I tried to explain its significance, eventually Barry grew bored and wandered back to his own seat. I remained staring at the snack box – it wasn’t the most bizarre foodie-industrial skeuomorph I’d seen that week, but it was up there. As regular consumers of this column will know, a skeuomorph is a once-functional design element repurposed to be purely decorative. In the case of the snack box this was its printed wickerwork’s evocation of lazy afternoons on the river at Henley, with Montmorency performing tricks, and with the hamper’s lightweight yet sturdy construction keeping sandwiches and bottled light ale gently aerated. 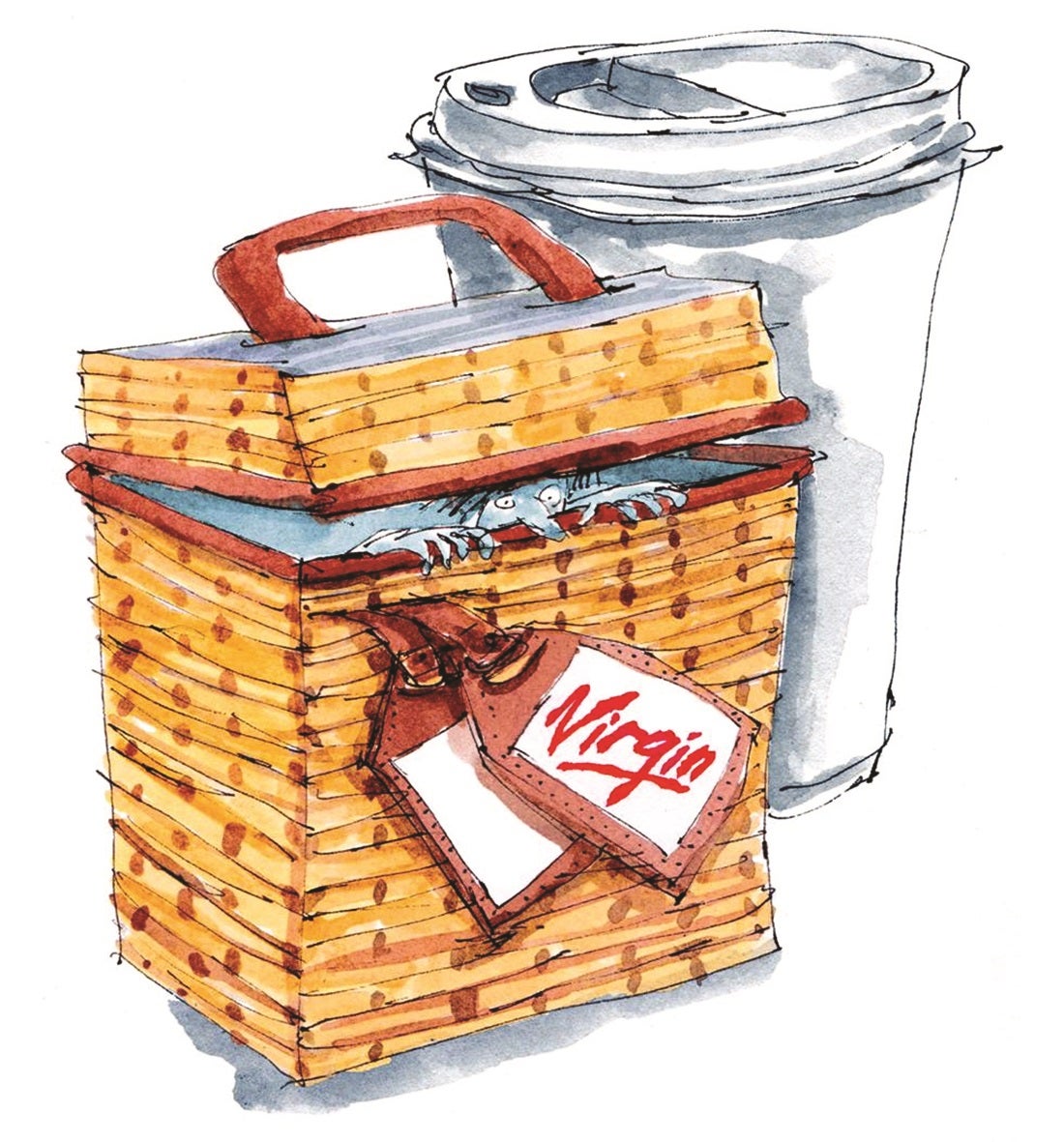 However, my youngest son had spotted a weirder bit of trompe l’oeil earlier in the week: a Chicago Town Stuffed Crust Four Cheese Melt pizza box that had, printed along its edge, the fake edge of a cardboard box (two-ply cardboard, with a wavy cardboard line in between). We both examined this packaging mutation, marvelling at a world in which a product designer would choose to camouflage a cardboard box as a cardboard box. Mind you, the Chicago Town pizza itself was only masquerading as a pizza – yet this didn’t help much when it came to accepting the reality of the Virgin snack box and, by extension, the existence of Richard Branson. Abandoned by Barry Sheerman, whose ministerial experience might have shed some light on the problem, I fell balefully to examining the snack box. It inspired me to an act of epoché or “bracketing”, as defined by the philosopher Edmund Husserl: I suspended all judgements about the existence or otherwise of the external world, and therefore my own capacity (or Richard Branson’s) to act within it.

Thankfully this scepticism worked, and the reality or otherwise of box and Branson ceased to trouble me. Then I tried rebooting by examining the phenomena that were given to me immediately in consciousness – and the trouble instantly recurred, because the phenomena I perceived were: first, an idea of an egregious bearded entrepreneur; and second, a snack box printed so as to resemble a miniature picnic hamper. It was a devilish conundrum, one such as might have been devised by Descartes’s malignant deceiver. As to breaking the spell by, say, opening the snack box and eating its contents, such an action was anathema to me. What if it contained a Branson homunculus, one that tried to sell me Virgin Money?

I resolved instead to take the snack box home with me and keep it for ever, for ever sealed. It is sitting on my desk as I type this, and although it has the innocent appearance of a mass-market catering pack, I know that it is really a veritable Pandora’s box, from which all the world’s ills might erupt, should I be foolish enough to fancy a light bite.

Will Self is an author, broadcaster and New Statesman columnist. He has written novels, collections of fiction and novellas, and is professor of modern thought at Brunel University London.