There is one particular clip of the American actress Paz de la Huerta that I think of whenever I hear her name. In that clip – which is on YouTube, and which is extracted from the 2015 film My Scientology Movie – the documentarian Louis Theroux is interviewing the ex-scientologist Marty Rathbun in a glass-walled hotel room overlooking an azure pool. “I have my written response from the Church,” Theroux says in his blank, Theroux-ish way, unfolding what turns out to be a letter barring him from further access.

The mood is extremely sober, making it even more unexpected when a pouting de la Huerta, suddenly appearing on the balcony in her bikini, steps into the suite as if attending an audition. “Hey, you cannot film me,” she purrs languidly, before delivering her CV in the manner of a monologue: “I’m an actress. I’ve done over 45 films, in French, and in Spanish.” Her navy-blue manicure perfectly matches her bikini. Her form, if not quite as Barbie-like as it was at the apex of her fame, is built to draw the eye.

Her exit, which she executes as if she’s in an advertisement for Paz, Who Has Appeared In Over 45 Films In French And In Spanish, is what really lodges in the mind. “My name is Paz,” she tells them, turning to look over her shoulder, fluttering her hand over her chest for emphasis: “Paaaz.” It is peak de la Huerta; in each of her movie roles she brings the same doped sensuality, a stretched-elastic voice as raw as beef carpaccio, a stuffed-up sounding nose, and a penchant for nakedness that borders on pathological. Which is to say: in every role, it ought to be the case that the character’s “name is Paz. Paaaz”, as if they were reincarnations of the same volatile, sexy woman.

In Gaspar Noé’s 2009 film Enter the Void, a drugged-out and electrifying three-hour riff on The Tibetan Book of the Dead, de la Huerta gives perhaps her best performance playing Linda, a sex worker with a Freudian attachment to her brother. Reincarnation is literally the movie’s theme – mostly told from the perspective of a soul that hovers, powerless, over the movie’s woozy action. It begins with a man’s death and ends with his returning to Earth as a baby. 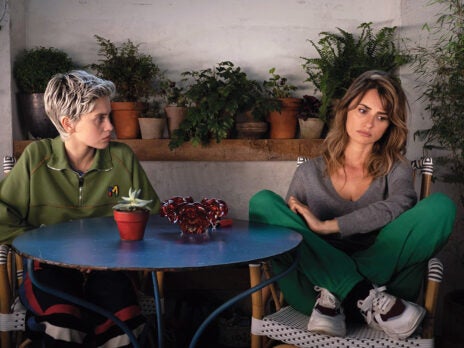 “Basically, when you die, your spirit leaves your body,” one lover of psychedelics tells another in the opening. “At first, you can see all your life, like [it’s] reflected in a magic mirror. Then you start floating like a ghost… the only way out is to get reincarnated.” Noé ensures that the viewer, subjected to visual effects that mimic the disturbances of the drug DMT, also feels as though there’s no escape. Time, as malleable as chewing gum, shrinks and expands.

[see also: Why David Fincher’s slick thriller Gone Girl is also one of the great romcoms]

As with most of Noé’s films, Enter the Void is a bright, bratty middle finger, making it the perfect setting for a natural-born provocatrice such as de la Huerta. In a scene in which she breaks down, screaming at the boy who framed her brother in a drug deal to “just fucking kill [him]self”, she calls to mind Isabelle Adjani in Possession (1981): unpredictable, extremely close to the material, and radiating an unhinged, threatening heat.

The daughter of a Spanish nobleman, and a fashion model before she turned to acting around the start of the century, de la Huerta has had both a hard life and an uneven career in the 11 years since she emptied herself into the role of Linda. Her involvement in the Harvey Weinstein case (in 2017 she told Vanity Fair that the producer had raped her twice in 2010, just after Enter the Void opened in the US) and her ill-treatment by the tabloids drove her into seclusion. This year, she finally returned to the screen in a new film by Michael Maxxis, Puppy Love, for which she won the Best Actress award at the Oldenburg International Film Festival.

It is possible – and preferable – that this might herald a further reincarnation, giving de la Huerta a chance to make good on her earlier promise. At the end of another entertaining YouTube video, taken on-set at a shoot for a fashion magazine, she signs off by wagging her finger at the camera. “God be with you. Which is what ‘goodbye’ means,” she says, a little bossily. “Jack Nicholson taught me that.”

She really does know how to make an exit. Hopefully, she also knows how to make an equally singular re-entry. In the meantime, watching Enter the Void serves as a startling reminder of the power that a naturalistic, unpredictable and laid bare actress can bring to a film by an experimental, inventive director – not unlike the thrill of watching Lindsay Lohan slay Paul Schrader’s grimy, cheap The Canyons.

“Enter the Void” is available to stream on Mubi