When Sarah Gavron, Theresa Ikoko and Claire Wilson set out to make Rocks, they wanted it to be authentic. They decided the process for their bold film, which follows a group of London schoolgirls through home troubles and friendship fallouts, had to be collaborative. The film’s cast members were not hired via traditional auditions, but were discovered through months of research in school classrooms across London. Its script was not set in stone in a writers’ room, but workshopped in sessions with young people. The story development and casting process went hand in hand, and the result is a remarkable portrayal of inner-city teenage life.

“This was a film that had to be authored by everyone involved,” said Gavron, the director, who was born in London in 1970 and has dedicated her career to telling the stories of women, including in Brick Lane (2007) and Suffragette (2015). “That was the way to make it true, to make it sing, to make it reflect and capture and be true to who these girls are.”

The very nature of this collaboration disrupted the traditional hierarchy of a film set, and this alone makes the film feel revolutionary in its commitment to depicting real life. “Because we spent so long with everybody as a group, even though the film was scripted a lot of the nuances and the magic came from the time we spent with the girls,” said Ikoko, a British-Nigerian playwright who grew up on a Hackney estate similar to the one depicted in the film, and who co-wrote the screenplay with Wilson. “There was a lot of trust. A lot of them was in us, and a lot of us was in them.”

In February, I met Gavron, Ikoko and first-time actors Bukky Bakray, 17, and Kosar Ali, 16, who play best friends Rocks and Sumaya, in a central London office. Claire Wilson, whose writing credits include the BBC adaptation of Le Carré’s The Little Drummer Girl and an upcoming adaptation of The Power by Naomi Alderman, joined via Facetime. Bakray and Ali, who were 14 and 13 respectively when they filmed Rocks, were tired after a long day of interviews, they told me, but still they munched on sweets from bowls on the large boardroom-like table, and giggled endlessly with their colleagues. Evident off-screen in that room, even after back-to-back meetings, was the joy that also burns through Rocks on screen. 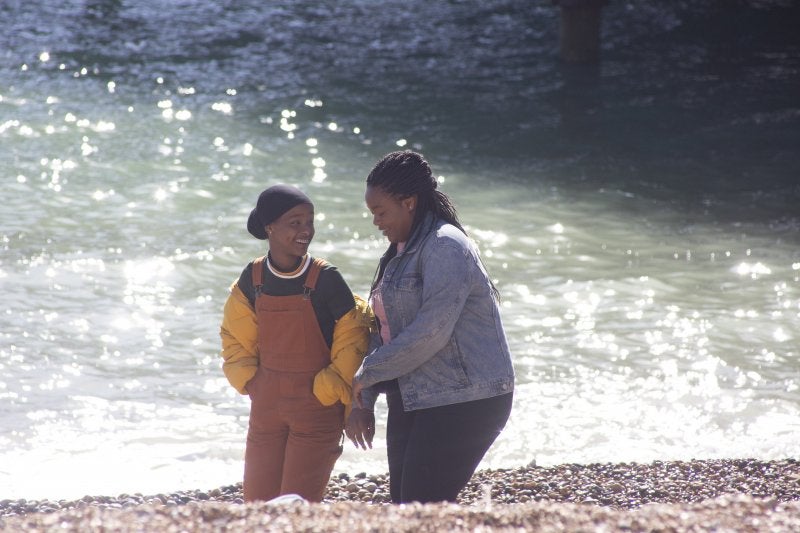 At the film’s heart is 15-year-old British-Nigerian Rocks, who lives on an east London estate with her little brother, Emmanuel (D’angelou Osei Kissiedu), and their single mother, Funke (Layo-Christina Akinlude). In the first scene, we see Rocks and her friends hanging out on the roof of a tower block, singing and dancing at golden hour, the urban sun beating down on them. It’s a glorious depiction of the free spirit of youth. Soon, Rocks’s world shifts dramatically: she comes home from school to find a note and thin envelope of cash from her mother. She has left, gone away for a little while. She asks Rocks to take care of Emmanuel.

From this point on, the exuberance of Rocks’s day-to-day life is undercut by helplessness. Each emotion needs the other, said Wilson, “you can’t have darkness if you don’t have light. We’ve been in audiences where people have been laughing, like rolling in the aisles, and then at the end they all come out completely wet-faced from crying.” Rocks embraces the emotional complexity of its characters, something often lacking in depictions of people of colour, particularly those living in inner-city working-class communities.

“I’m from Somalia,” said Ali, “and when I watched shows and films when I was little, if there was a Somali character, they were either an attacker or a victim. We were always portrayed to be violent, uneducated, aggressive, and that is not how it is. We have a beautiful country with beautiful sides and beautiful stories and a beautiful culture. But the people who create stories don’t show that.”

Ali also observed a technical lack of care in filmmaking, such as poor efforts to light black people properly. “Our features… I know that’s not important,” she hesitated, “but black people are beautiful, you know what I mean? We’re gorgeous. I don’t know why you’re trying to make us look like we’re rusty.”

What Ali noticed as a viewer is something Ikoko ensured was addressed in the filming of Rocks. “I remember watching Moonlight and thinking, why does this feel different?” Ikoko said. “And it was the lighting. We have, in the cast of Rocks, a young woman who identifies as Polish Gypsy, we have a young British girl, we have Somalis and West Africans all on the same screen and they all look to their full glory. Oh, who’d have thought it?”

In the film, Funke disappears because of her depression, a plot point that is implied rather than fully delved into. “I think mental health is taboo in the black community,” said Bakray, who added that she thinks her character understands what her mother is going through, but doesn’t want to confront it. “I’ve always been taught to be strong and hold everything in, because as a woman that’s what you should do.”

While Rocks tackles this issue in a way few other films have, it doesn’t allow the film, or Rocks herself, to be consumed by it. “And that’s the thing I love about Rocks,” Bakray added, “it’s just girls being girls. Especially for black women… black women are not always able to embrace their femininity. It’s the constant having to be strong all the time. And Rocks just shows girls in their prime, girls being females, girls not having to submit and change themselves and harden.”

Ikoko nodded. “We are loud and we are boisterous and we have a lot to say! Sometimes we say it at the wrong time, but the idea that when a black girl laughs loud, that is a violent, disruptive outburst, rather than something of joy and of love… that’s problematic and it needs to be stifled.

This sisterly unity sits at the heart of Rocks. “What we created felt like magic, it felt like family, it felt like love,” said Ikoko. “It sounds really wanky” – she looked to Bakray and Ali, “don’t say that word!”, and the pair laughed, shaking their heads – “but what we had created was a sisterhood, big sister, little sister, to the point where Bukky sometimes calls me when I’m ready to go out at night. She’ll be like, ‘Where you going? What time you coming home?’ And I’m like, ‘Mind your own business!’” The room erupted with laughter.

Sitting in that boardroom in February, it was obvious Bakray and Ali had found a role model in Ikoko, and that she had found younger sisters in them. When I asked the group about the importance of representation of people of colour on screen, Ikoko spoke about why she finds the term difficult, about how she doesn’t feel she “needs” it, but rather “wants” it: “The reason I say I don’t need it is because it’s often used as a weapon against us. I’ll go into TV meetings and pitch a story that is a group of Somali sisters, and the response will be, ‘Oh, where do we have Somalis in the UK? Let’s just have a look…’ Mmm, so you think Somali women aren’t watching TV at all, they’re just waiting for themselves? Because I watched Doctor Foster and I loved it. And I’m not a white woman going through infidelity issues.”

As she spoke, Bakray and Ali’s adoration became clear. I turned to them, but they said they didn’t have anything to add – “Literally, what she said.” “You can’t beat that.” “There’s nothing else” – and Ikoko laughed.

“I always say I don’t want to be represented, I want to be loved,” she added.

Bakray nodded: “That’s what I mean! She knows everything!” 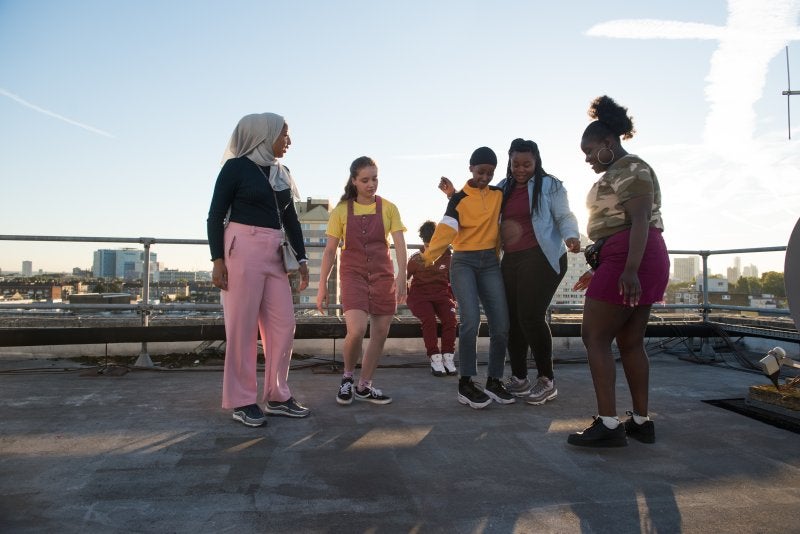 The film’s original April release date was pushed back to September due to the pandemic and the closure of cinemas worldwide. When I caught up with Ikoko over Zoom in late August, I asked her whether she felt the delayed release had stalled the project. She reminded me that from the outset, Rocks was never just about the public release of the film, but “about the community, it’s about the friendships, it’s about the girls”. The creative team, including associate director Anu Henriques and casting director Lucy Pardee, set up Bridge, an organisation which works to create a sustainable legacy in the industry, to carry these young actors, who have no formal training, on to their next projects, help them prepare for auditions and provide mentors for them. “To the outside it might feel like it’s been on hold,” Ikoko said, “but for us it has continued. The work of Rocks was always bigger than the film.”

In fact, many of the film’s themes seem ever more urgent now, following this year’s Black Lives Matter protests and the world’s reckoning with racial injustice on a global scale. I kept reflecting on Ikoko’s earlier discussion of on-screen representation whenever I saw big businesses, particularly those in the media and arts, pledge to diversify their workforces and products over the last few months.

“Representation on screen and representation in everyday life are quite different things,” she clarified. “It’s important to have diverse workforces, diverse places of business… because that’s how racism works: racism is using power and privilege to oppress another group, and with things where that is people’s life or death – whether or not the doctor believes the old ways they learnt, that black women are exposed to less pain than white women – those are things that can make or break somebody’s life.

“When I talk about not needing representation on screen, I say it because I don’t want it to be a matter of obligation or a matter of need. I deserve it. I deserve it because I exist. Give it to me because I want it. It’s OK to want something. I think the framing of black and brown people’s equity as a need or as a right that we must fight for, that we must protest for, that needs think tanks, that needs a report… I think all of those things are rubbish. Just put us on TV because we want to be. Put us on TV because we’ve got a good story to tell.”

“Rocks” is released in UK cinemas on 18 September.