If you pick up the November issue of British GQ, Johnny Depp’s very famous face stares back at you. The phrase WORLD EXCLUSIVE is written underneath it, in self-aggrandising all caps highlighted in red. Then: JOHNNY DEPP. An outlaw talks. Then, in chummy “who else but this guy?!” parentheses: And talks and talks… Then four summarising words: The divorce. The violence. The excess. The vengeance.

This all obliquely refers to the fact that over the last two and a half years, Johnny Depp has become a deeply controversial figure in Hollywood. That’s because in May 2016, Johnny Depp was accused of assaulting his then-wife Amber Heard, when Heard filed for a temporary restraining order on Depp.

In the court declaration requesting the order, Heard stated that “during the entirety of our relationship, Johnny has been verbally and physically abusive to me”. Over the following weeks and months, videos of Depp throwing bottles and glasses and shouting at Heard, photos of Heard’s bruises, and text exchanges between Heard and Depp’s manager emerged. The couple later released a joint statement saying “neither party has lied nor made false accusations for financial gain” and that there was “never any intent of physical or emotional harm”. Depp has continually insisted any accusations of domestic abuse are untrue. 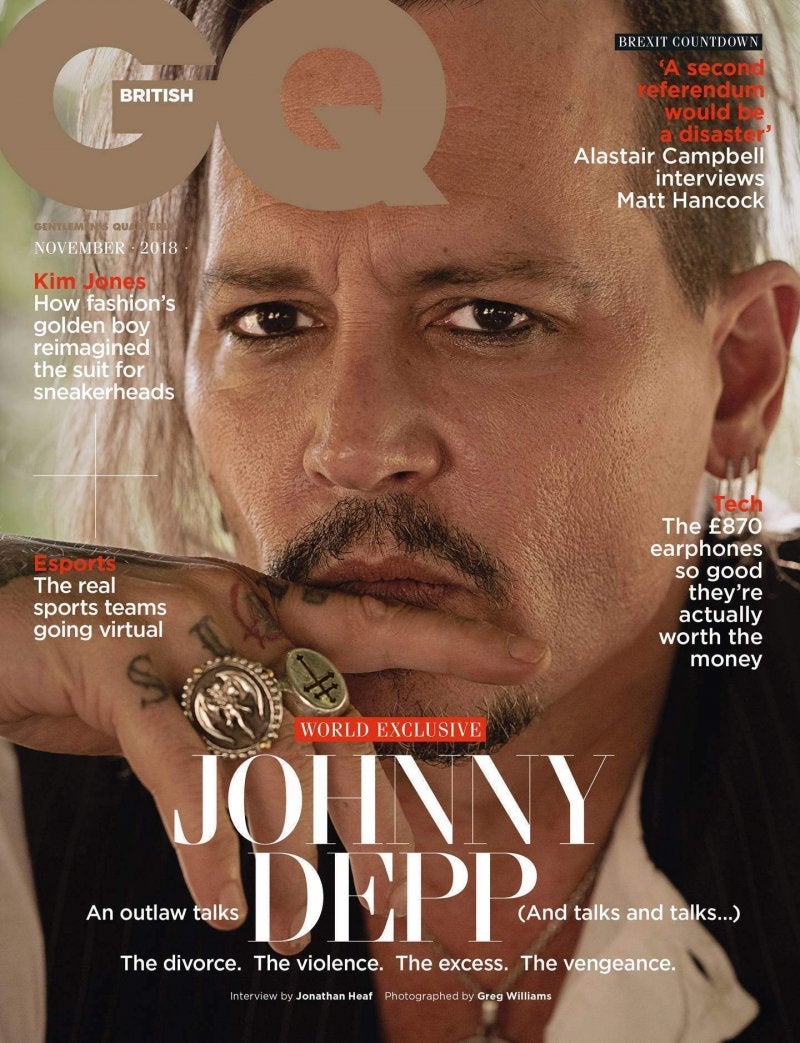 GQ is all about cool; its cover stars, be it Jeff Goldblum or Michael B Jordan or Zayn Malik, are chosen because they are the stylish, often lusted over, men of the moment. Their covers are (often explicitly) celebratory. This cover of GQ has been deliberately designed to give the accusations made against Johnny Depp an edge of rebellion. He’s not an alleged abuser; he’s an “outlaw”. Alongside the salacious glamour of more typical Hollywood scandals (“divorce” and a whole lot of “excess”), the words “violence” and “vengeance” are given a glossy sheen. These accusations, the cover implies, are dangerous – and a little sexy. These accusations are cool. Put a hat and some cowboy boots on them, and you’ve got yourself a GQ cover star!

The headline chosen online is “Johnny Depp will not be buried”, which implies that by filing for a restraining order that contained claims of domestic abuse, Amber Heard was metaphorically attempting to murder Johnny Depp. Or, if we’re being charitable, just bury him alive. Or perhaps it is the media that is trying to bury Johnny Depp, what with all its blockbuster Hollywood movies and major magazine covers starring Johnny Depp. Either way, in Depp’s own words, “what is being done is the commencement of what they hope is to be your funeral”. And Johnny Depp will not be buried, because he is an outlaw who is used to sticking it to the man.

Interviewer Jonathan Heaf is desperate to let us know how cool Johnny Depp is. He is described as “always looking like he’s just come from break-up sex with a werewolf”, as “a surly indie misfit who […] wore oversized vintage leather jackets and smoked Marlboro Reds while smooching wild fashion cats such as Kate Moss”. He is a “Mickey Mouse with a fondness for a bottle of Château Calon Ségur (2014)”. His fingers “are cluttered with rings and his arms are full of black ink”.

In case you were worried that something as pathetic as discussing his feelings about his life would dampen Depp’s aura of rebellious masculinity, Heaf is here to reassure you. “Maybe it’s just Depp’s natural charisma,” he writes, “but the intensity of the conversation feels like lifting weights […] simply because of the rawness, the emotional density of the topics. We sit in silence. Depp doesn’t move, not a single muscle flinches.” This isn’t your grandmother’s celebrity interview. This is a celebrity interview that is metaphorically the same as deadlifting a bunch of really heavy weights. It’s to do with “emotional density”. I wouldn’t get it, because I’m a woman, and also not used to lifting weights, even metaphorical ones.

There’s more. “A drive into Depp’s memories,” Heaf speculates, “would be like trying to control a car on a winding mountain road with its brakes cut, thrilling yet perilous.” (Ah yes, some more of that sexy, sexy danger.) The article opens by describing at length just how hardcore the death metal music is that Depp uses to wake himself up (at 2.43pm! This guy is a snoozy badass who doesn’t give a fuck!). He often namedrops Depp’s famous, cool male friends: Bob Dylan, Allen Ginsburg, Hunter S Thompson, Marlon Brando. Well over 1,000 words are spent drooling over the “private utopia” of Depp’s South of France home.

But even as Depp is repeatedly framed as incomprehensibly badass, he is also described as a victim. Heaf describes the effect “the torment of the past few years” have had on Depp, calling him a “wounded animal”. Heaf presents Depp’s version of events unchecked, quoting him for paragraphs at a time as he explains the effect the accusations had on his children, his disbelief that Heard would go to a party the day after the date of an alleged violent incident, his wild theory that the “vile fucking circus” of Hollywood conspired to bring about his downfall.

Depp speaks about himself as a brave man on a mission to find the truth in a world of lies and deceit, at times he seems to see himself as on a quasi-religious quest. “Ultimately, the truth will come out in all of this,” he says, seriously, “and I will be standing on the right side of the roaring rapids.” Or: “I want the truth. That’s really my biggest obsession in the world. It’s just the fucking truth.”

The circle jerk really begins as Heaf plays into this narrative of Depp as a lone soothsayer in a dirty world. He goes on clunky tangents about the meaning of perspective (“The truth has no time for perspective. Or rather, truth is not about perspective as a point of view. But to see the whole truth? The whole story? Now, that sort of perspective will allow you to get the entire picture…”) in order to ultimately conclude: “There is no doubt Depp is seeking the truth.”

Much effort goes into describing, in lifestyle-esque prose, the “black vintage typewriter with round, silver keys” he finds in Depp’s bedroom, “the black ink speckled and smudged on the grained, ivory paper”. Heaf writes that the work is “eloquent”. “It reads like someone trying to write vividly,” he adds, “someone desperate to get it out.” Depp, then, is a misunderstood, tortured artist, merely 300 pages away from shocking the world with “the sordid beautiful truth”.

Heaf makes reference to two ancient myths during the profile: first, Odysseus’s triumph over the Sirens, second, when he writes that Depp has metaphorically “looked into the Gorgon Medusa’s eyes to see for himself life’s savage reality”. I have a good guess as to why Heaf thinks these legendary tales of heroic men overcoming tempting, manipulative, or vengeful women is relevant to this story. Through these comparisons, Depp is glorified as a modern-day Odysseus or Perseus.

Two spineless paragraphs see Heaf attempt to distance himself from criticisms that he might be lionising a man accused of domestic abuse. “This isn’t a piece claiming to know with any authority about what happened between Johnny Depp and Amber Heard in May 2016 or at any other time between the pair in private,” he writes. “All I wanted to do was come to Depp and ask him to give his side of the story”. He adds that this was what was “agreed” with Depp’s “advisors” before the two were actually able to meet.

“Let me be clear,” Heaf insists. “This is not a piece of investigative reporting. It is merely a snapshot, a chance to sit down and talk to a person of immense interest and talent, who has, it must be noted, brought joy to millions of film lovers all over the world, ever since he moved from Kentucky to LA and a friend, Nicolas Cage, told him he should go and see his acting agent.”

If it seems weird to you to begin a paragraph with a discussion of a “serious allegation” of abuse made against a man, and end it with an aside about how that same man “has, it must be noted, brought joy to millions”, that’s because it is weird. Why must it be noted? It’s a strange, almost Trumpian distraction technique. When we’re talking about accusations of abuse, whether someone has “brought joy to millions” is irrelevant. It would be irrelevant if they were true, it would be irrelevant if they were not.

I’m confident that it’s irrelevant, because Johnny Depp brought unspeakable joy to me. When I was 11 years old, I loved one man, and one man only, and that man was Johnny Depp. As I began to enter my teens, I watched every single one of his then 30-film-strong back catalogue, even the ones wildly beyond my maturity level. His face became more familiar to me than those of my closest family members. I especially loved Edward Scissorhands, Benny & Joon, and What’s Eating Gilbert Grape: his vulnerable brown eyes and gentle mannerisms showed that he, like me, was a misunderstood child living in a world that was scary and heartless and impossible to understand. We were kindred spirits. I decided it meant something cosmically important that Benny & Joon had been filmed during the year of my birth.

I shouldn’t be saying any of this, of course, because my personal feelings about very famous actor Johnny Depp are not relevant to Amber Heard’s claims. In 2016, my abstract feminist beliefs about unquestionably believing women came crashing headlong into my childish hero-worship – and my desire to somehow preserve an innocent time in my childhood as uncomplicated and unconflicted. I was 24, beyond straightforward idolising, and it was still painful. That small pain hardly matters in the grand scheme of life. As most women do, I came to terms with the fact that my personal feelings towards the male heroes of my life are not relevant to the question of whether or not they are capable of abuse, or if they are even a good person more generally. I was a teenage Johnny Depp fan, and all I got was this lousy feeling that everything you’ve ever loved could end up monumentally disappointing you.

There was a time when I would have bitten your hand off to write a sycophantic piece about Johnny Depp. (Though almost no woman could get away with writing a piece this straightforwardly fawning about any male celebrity.) Not now. It somehow strikes me as deeply unfair that while I and countless other women do the boring work of killing our idols, and accepting that we can never know the truth about them, there are still male interviewers flying out to the south of France to gawk at Johnny Depp’s cool, death-metal filled mansion and proudly proclaim him the new Hunter S Thompson, without stopping to question their hero-worshipping of Johnny Depp OR ­– get this! ­– Hunter S Thompson!

“Let me be clear. This is not a piece of investigative reporting. It is merely a snapshot, a chance to sit down and talk to a person of immense interest and talent, who has, it must be noted, brought joy to millions of film lovers all over the world”.

All that says to me is: This piece was intended to give a man accused of domestic abuse an unquestioning, fawning platform. An outlaw talks! The divorce! The violence! The excess! The vengeance! It says to me that GQ sacrificed integrity to gain access to Hollywood scandal. I only hope the magazine’s readers are smart enough to refuse to buy into it.

@annaleszkie
Anna Leszkiewicz is culture editor at the New Statesman.