Lauren Bacall, the husky-voiced legend of 1940s Hollywood, has died aged 89. She is reported to have suffered a stroke at her home in New York.

Her death was confirmed on Twitter by the estate of her first husband, Humphrey Bogart.

With deep sorrow, yet with great gratitude for her amazing life, we confirm the passing of Lauren Bacall. pic.twitter.com/B8ZJnZtKhN

Her debut film, 1944’s To Have and Have Not, was where she first appeared onscreen with Bogart. Her sultry voice and languid gestures, coupled with the pair’s onscreen chemistry, immediately captivated audiences. In fact, the film contains two of Bacall’s most legendary screen moments. This one, in which she leans up against a wall and asks “anybody got a match?”:

And this one, in which she tells Bogart’s character “You know how to whistle, don’t you Steve? You just put your lips together and… blow”, inspired a thousand teenage fantasies:

Howard Hawks, the director of To Have and Have Not and the man who had brought Bacall to Hollywood from New York in the first place, shaped her early career. He changed her name from Betty to Lauren and his wife Nancy dressed her in the latest fashions. Warner Bros’s press agent provoked worldwide controversy when, in 1945, he orchestrated a photo of Bacall sitting on a piano played by Vice President Harry S Truman: 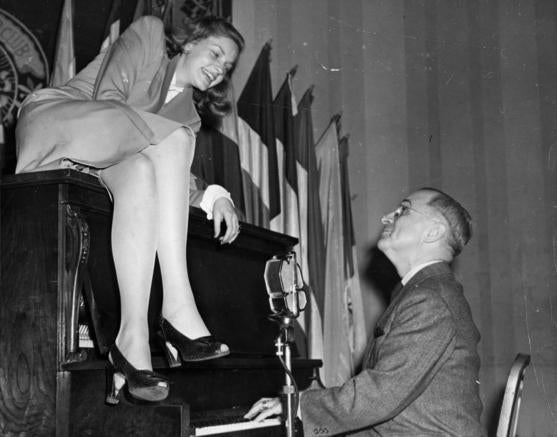 Hawks (below, with Bacall) cashed in on the obvious Bacall-Bogart chemistry from To Have and To Have Not by casting them together in a string of 1940s film noir pictures: an adaptation of Raymond Chandler’s The Big Sleep, Dark Passage and Key Largo. 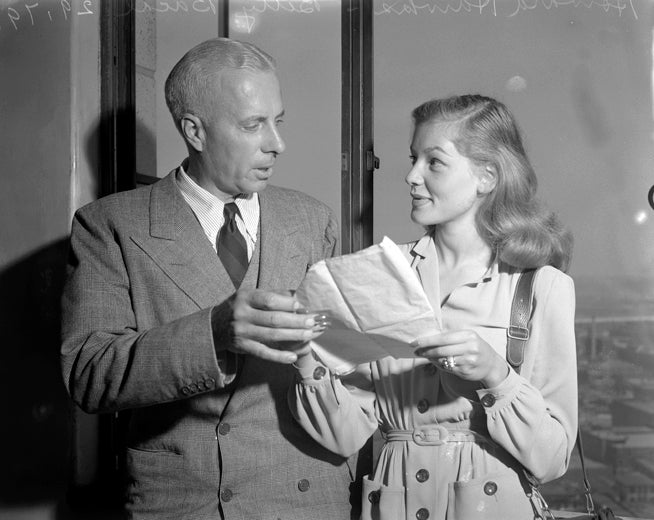 Bacall married Humphrey Bogart in 1945, once his divorce from his third wife Mayo Methot was finalised. He was 45, she was 20 – he nicknamed her “Baby” and as his divorce crawled through, he sent her a telegram that said “Please fence me in Baby – the world’s too big out here and I don’t like it without you.” 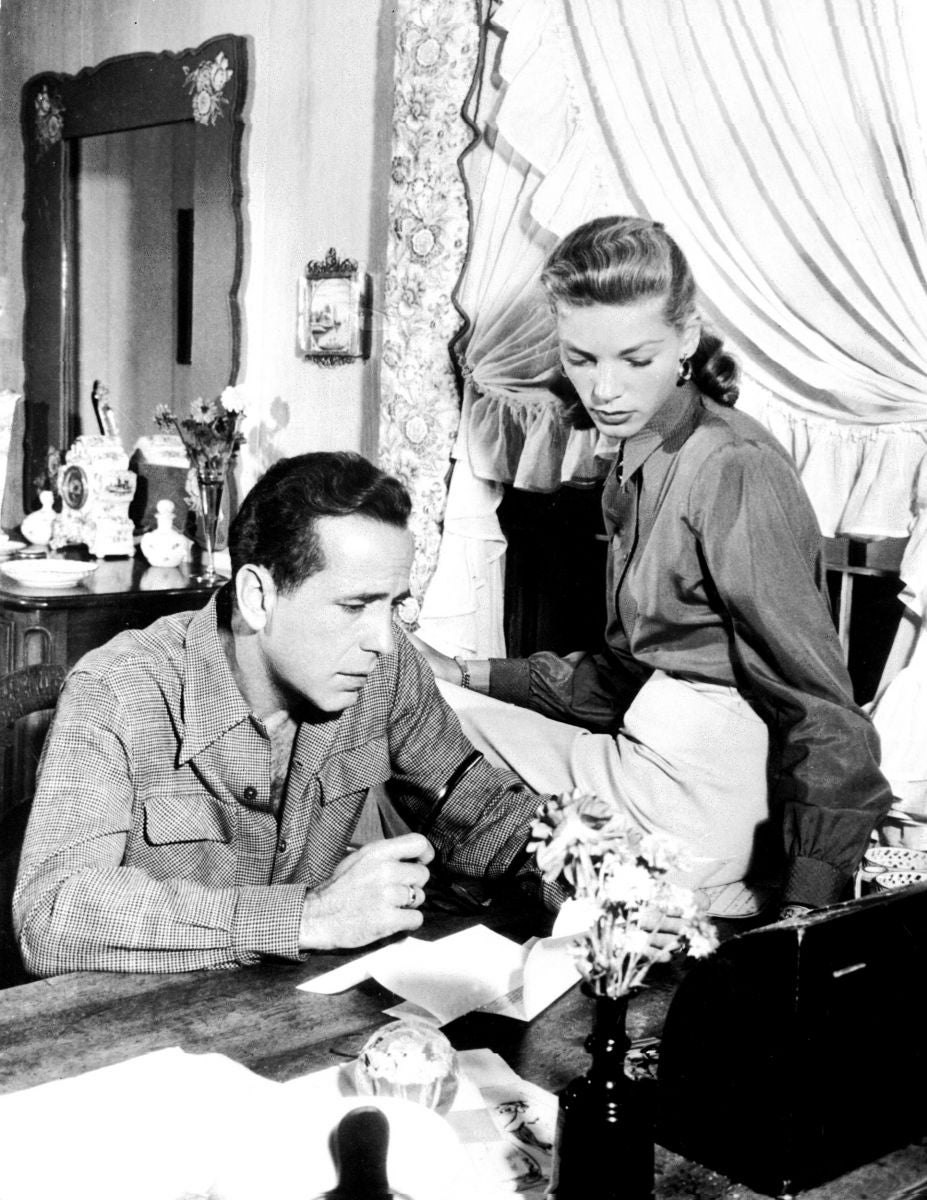 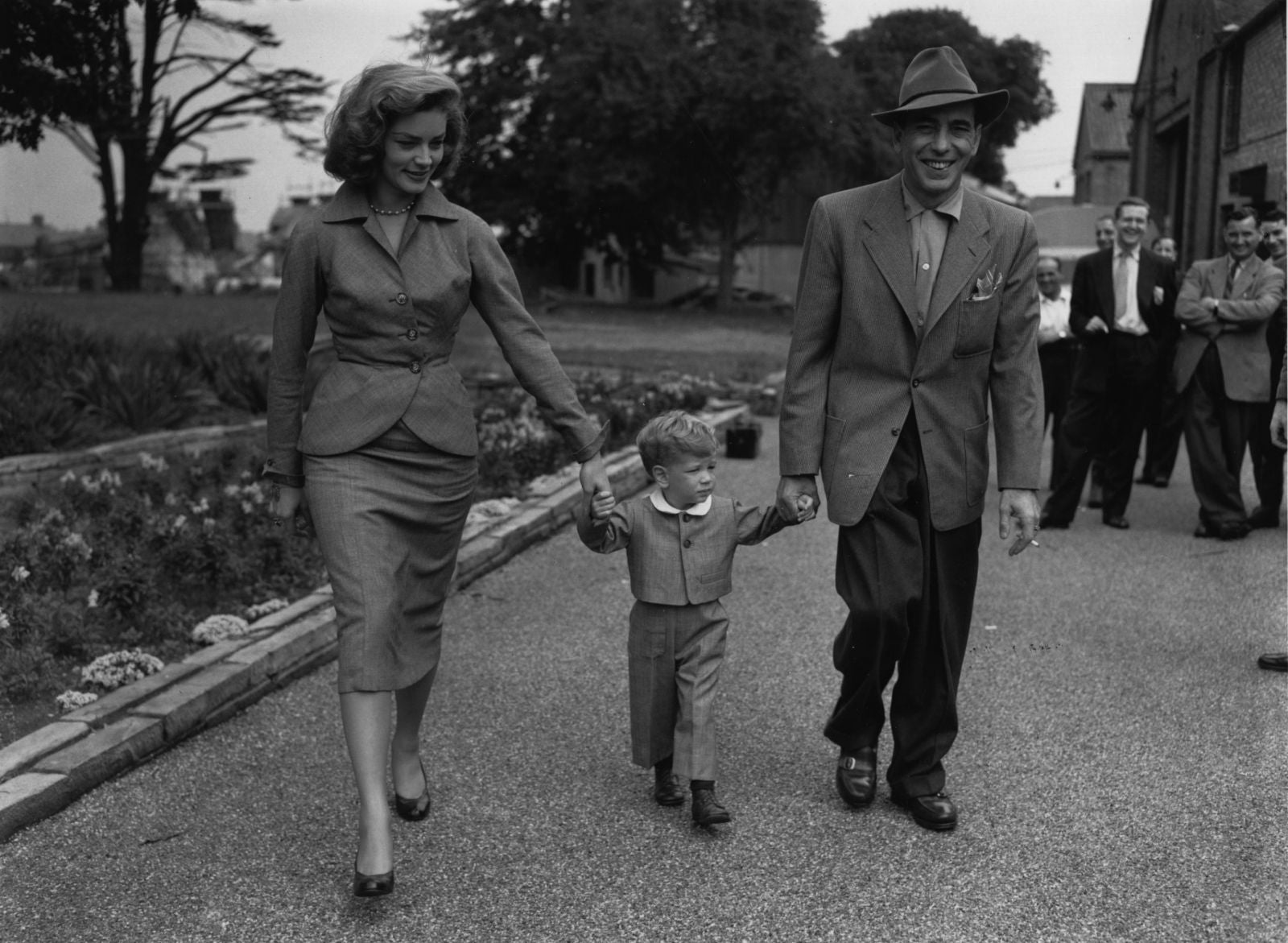 Bacall and Bogart with their son in 1950.

Bacall reportedly worried that having children impeded her later career, but her comedic turn as a gold-digger in 1953’s How to Marry a Millionaire, alongside Marilyn Munroe, was a hit. 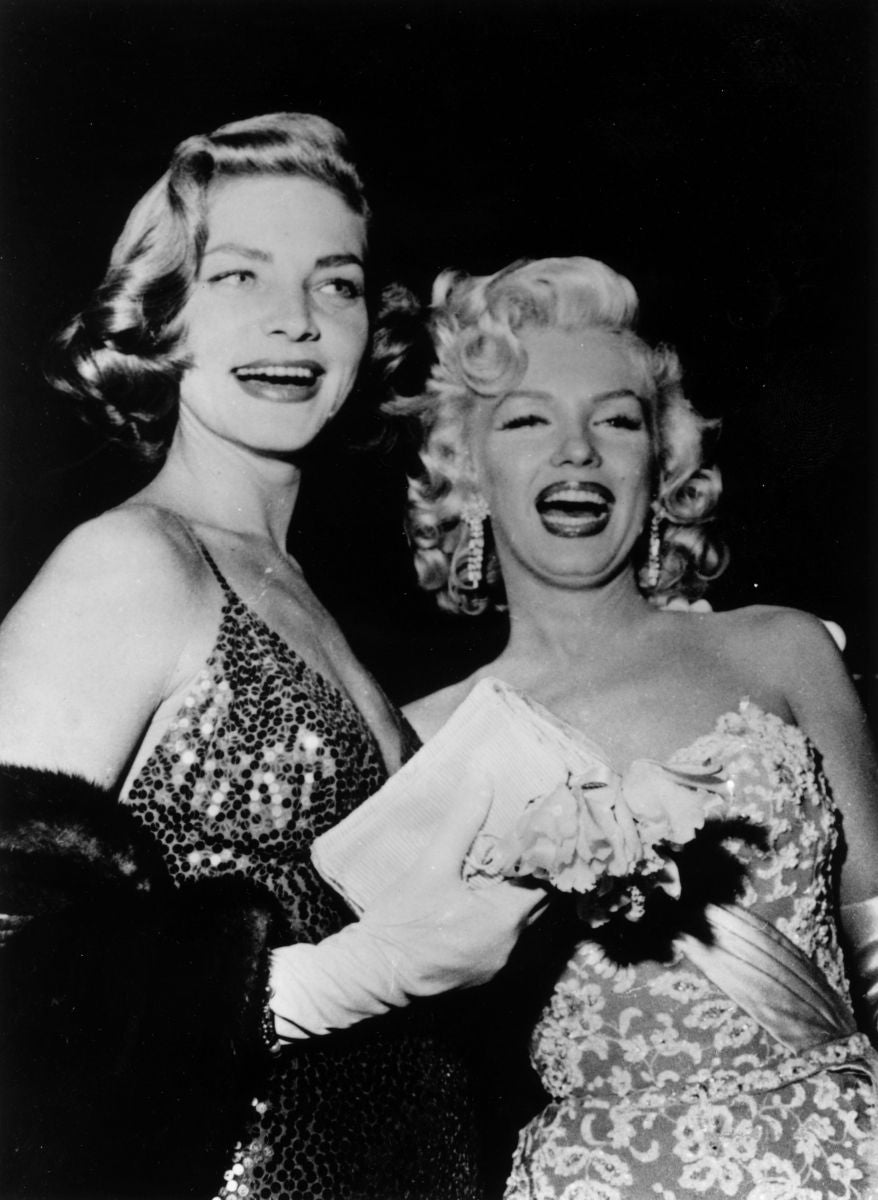 By the time Bogart died of oesophageal cancer in 1957, her film career was beginning to tail off, although her performance in North West Frontier (1959) was very popular. She gained a reputation for being “difficult” because she turned down roles she didn’t think were right for her. The post-war heyday of strong female characters, at which she had excelled, was over. As the Guardian’s obituary notes:

Bacall was playing for real a high-grade version of the postwar homemaker bride, but she was not in many movies. Hawks sold her contract to Jack Warner, who suspended her 12 times for refusing crap roles; 50s models of women were rolling off a new production line. Class now meant the aloofness of Grace Kelly; sass meant the vulnerable trashiness of Marilyn Monroe. None of them were sensual as Bacall had been, or as direct, straight-talking and brave. What happened to the image of women post-1945 is summed up in the difference between Bacall unfazed by Bogart’s drunk sidekick in To Have and Have Not (who grudgingly admits “Lady, you’re all right”) and Bacall unamused as the mink-pursuer in How to Marry a Millionaire, 1953. And that was considered a good part.

After Bogart’s death, Bacall briefly had a relationship with Frank Sinatra. 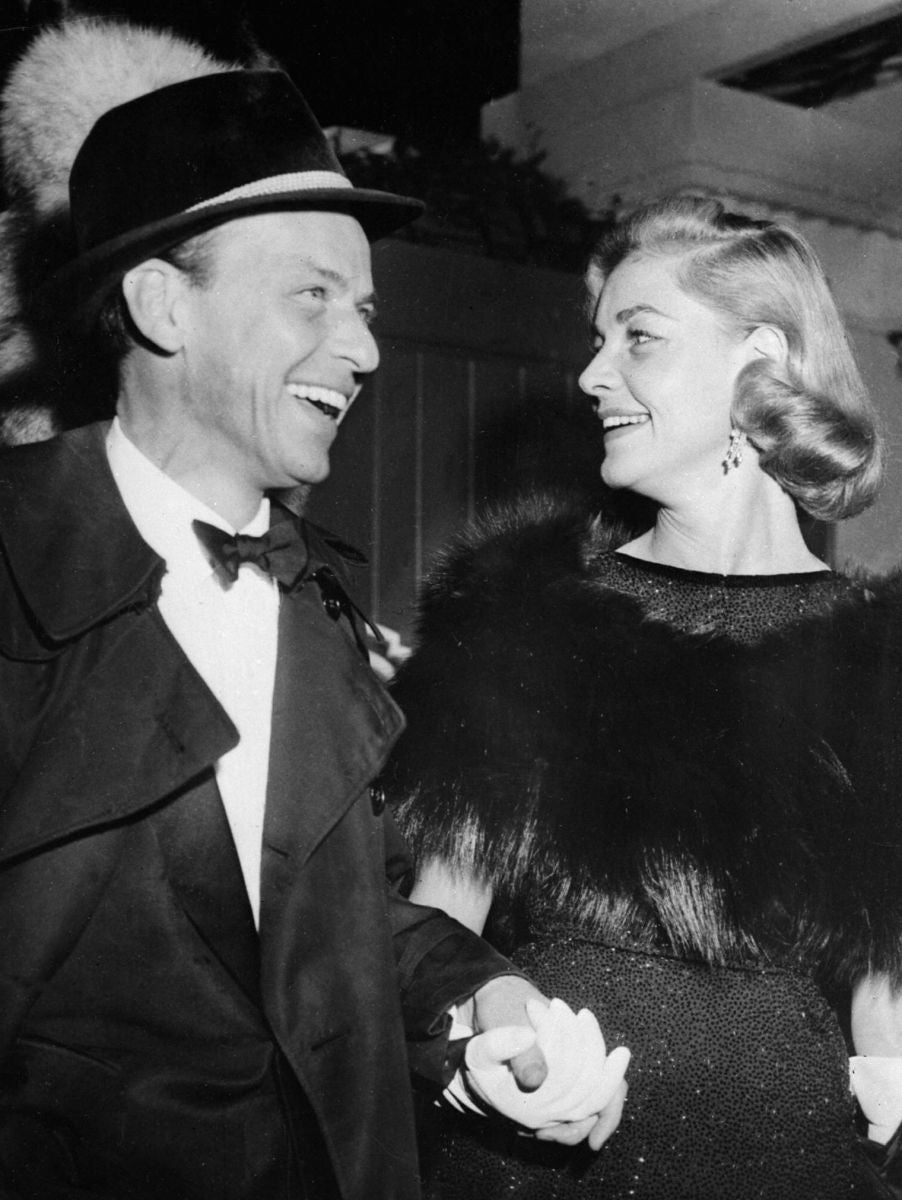 It didn’t last (although the pair [above] were briefly engaged), and she married actor Jason Robards, with whom she had her third child. 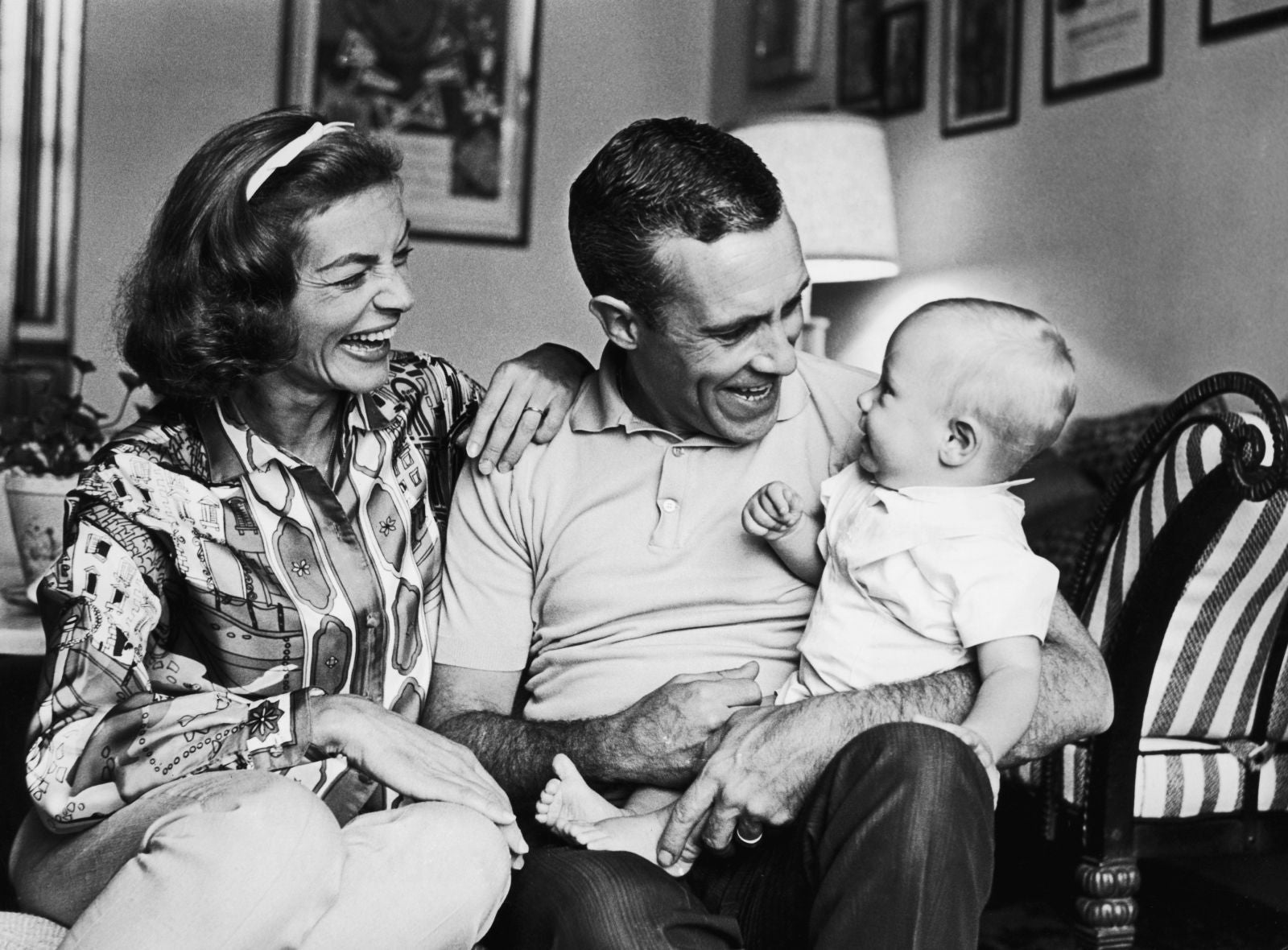 They divorced in 1969. In 1970, she expressed frustration at the public’s continuing fascination with her marriage to Bogart and her time at the heart of Hollywood’s Golden Age, telling the New York Times:

Do me a favour, do not give me that old thing about ‘Tell me the story of your life,’ or ‘How was it you were discovered?’ or ‘How did you first meet Bogey?’ Because I will upchuck, right here.”

I think I’ve damn well earned the right to be judged on my own, is all,” she said evenly. “That’s not sacrilege. I loved Bogey very much, we had a marvellous life, but the life has been over for 13 years, and it’s time I was allowed a life of my own, to be judged and thought of as a person, as me.”

Awards came late in her career – two Tonys for Applause and Woman of the Year on Broadway, a Golden Globe for her performance as Barbra Streisand’s mother in The Mirror Has Two Faces in 1997, an Honorary Academy Award in 2009. Before the Oscars ceremony, she told an interviewer she hadn’t been happy in years: “Contented, yes; pleased and proud, yes. But happy, no.”

If we think about Bacall, we recall her work from the 1940s – mostly her trademark “look”, with her chin tilted down and her eyes smouldering up (apparently first adopted to keep her nervous quivering in an early screen test to a minimum). 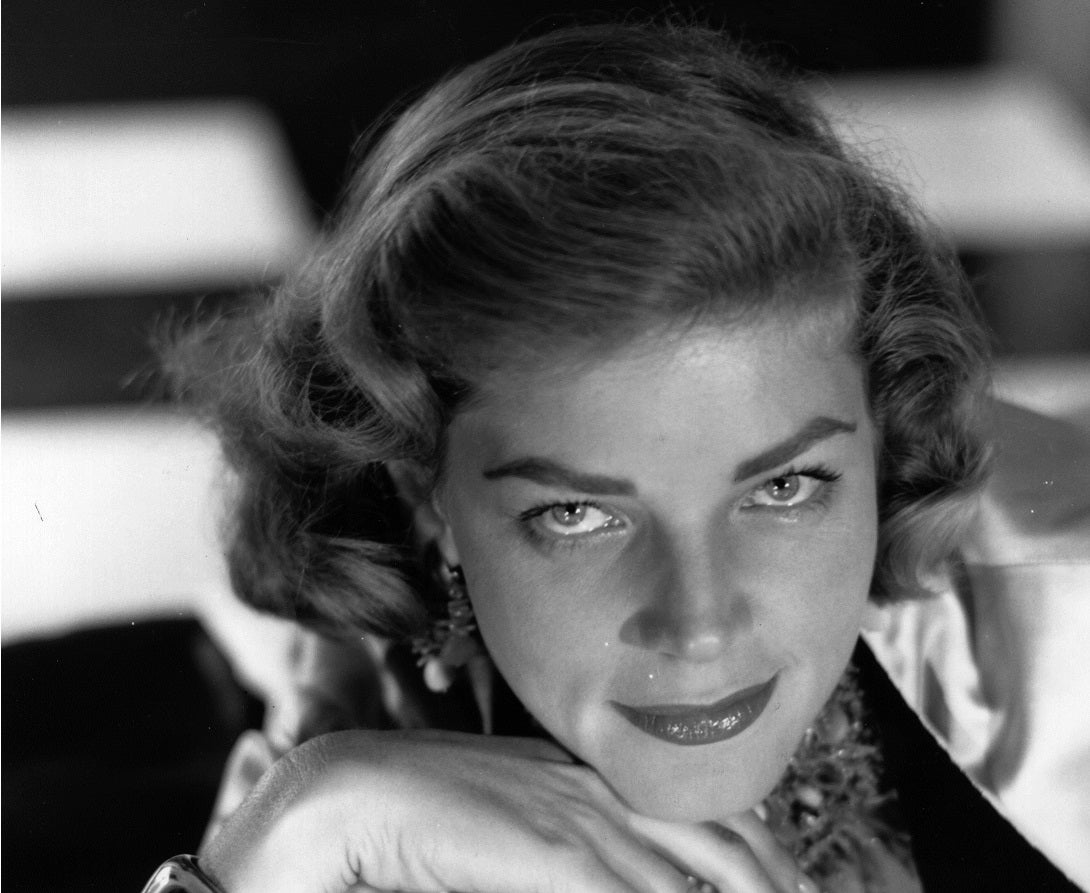 Her determination only to accept the roles she wanted to do coincided with a period when few interesting, independent roles for women existed in Hollywood films (there still aren’t many). Her life is too often seen through her relationships with men – first Howard Hawks, the man who Bacall said wanted to “create her as his perfect woman”, and then through her relationship with her husband, Humphrey Bogart, who she says “wanted a wife. He didn’t want an actress”.

When someone dies at an advanced age, we assume that at least some of their many years were spent happily. But Bacall didn’t care about contentment – she wanted to be good at what she did, and 20th century Hollywood wasn’t ready for that. As she told Vanity Fair in 2011: “I don’t think anybody that has a brain can really be happy.”