Before I interview Sally Rooney, I catch a glimpse of her having her photograph taken. Dressed simply in dark blue, tapered trousers, a light, neutral top, and no jewellery, she holds her chin in different positions on instruction, looks in different directions. The process of being photographed is not something she particularly enjoys. Lately, she has been photographed a lot.

It’s hard to overstate the extent to which Rooney is the novelist of the moment. At 27, she has been longlisted for the Man Booker Prize (the youngest nominee is still Jon McGregor, who was 26 when longlisted in 2002). She has been claimed, in reviews, interviews and on social media, as a totemic novelist for the millennial generation. Most of the reviews for her second novel Normal People were strikingly adoring: writers referred almost maternally to their battered copies and on Instagram people posed with early-release proofs. Connell, one of the book’s main characters, attends a literary reading and reflects bitterly: “all books were ultimately marketed as status symbols, and all writers participated to some degree in this marketing.”

Sitting in her publisher’s office in Bloomsbury, central London, Rooney grimaces when I bring this up. “I don’t know to what extent the book is being used as a status symbol because the responses to it do seem quite genuine. I can say: ‘If you can’t afford it, steal my book’, but my position in the structure, as someone who makes money from intellectual property, makes my saying it quite hollow. I’m not totally comfortable with the ways in which our culture monetises art and literature.”

What about being longlisted for the Booker? “It’s nice, yes. I’m not sure that the culture of literary prizes is always a good thing, but while there are literary prizes, it’s nice to be nominated.”

Rooney thinks deeply, and seems more passionate as our conversation becomes broader and more abstract. At the age of 22, she was the number one competitive student debater in Europe. A few weeks before our interview, she deactivated her Twitter account, after tweeting that “novelists are given too much cultural prominence”.

Conversations With Friends, Rooney’s critically acclaimed debut novel, was published in 2017. It is set in Dublin and follows four people who become drawn together in a series of complicated, compulsive relationships. Nick and Melissa are an almost-famous married couple, an actor and a photographer, who meet two 21-year-old Trinity College students: Bobbi and our narrator, Frances – best friends who were previously in a romantic relationship. Fiercely outspoken and often charming, Melissa and Bobbi are drawn to each other immediately. Nick and Frances find themselves in the midst of a magnetic attraction that feels as inevitable as it does impossible to pursue.

The novel opens at a poetry night where Frances and Bobbi, after performing together, meet Melissa as she photographs them. Frances is pleased to find that in the photos she appears “bored and interesting”. “I tried to imagine my name appearing in a profile piece, in a serif font with thick stems,” Frances tells us. “I decided I would try harder to impress Melissa.”

The novel is forensically engaged with the constant, small ways in which we interpret and perform in our relationships with others, finely attuned to how dynamics between people form. Frances fantasises that she is “a genius hidden among normal people”. But, like most people, Frances is also desperate to know that she is normal, too, fearing that her desires are weird and her vulnerabilities shameful. “Things matter to me more than they do to normal people,” she worries.

In Rooney’s second novel, her attention to the minute details of human interaction is no less exhaustive. And yet, like Conversations With Friends, it never feels slow: the dynamism of its characters and their unpredictable bonds draw you into the novel as they are drawn to each other. Normal People is already being made into a BBC Three TV series, with Rooney adapting her own book, and Lenny Abrahamson, the Oscar-nominated director of Room, at the helm.

On the phone from Dublin, Abrahamson tells me he “jumped at the chance” to direct it. “I was drawn to her capacity to capture real lives with what seems like effortless simplicity… and yet the cumulative effect is a feeling of depth and insight. You feel she’s really encountering these characters as if out in the world. She finds in small details of gesture or voice brilliant ways to open out the interior life of a character.”

Normal People follows the relationship of Marianne and Connell, whom we meet as teenagers attending the same school in Carricklea, County Sligo. Connell’s single mother cleans the large house where Marianne lives with her abusive brother and unfeeling mother. At school, they never speak: Marianne is a social outcast in ugly shoes who talks back to her teachers, while Connell is popular and preoccupied with what his peers think. Connell “fears being around her, because of the confusing way he finds himself behaving, the things he says that he would never ordinarily say”. But he also “finds himself fantasising about the things he could say to impress her”.

The book started as a short story, “At The Clinic”, which sees a 23-year-old Connell driving Marianne to the dentist. “I kept wanting to write about these characters who were in their early twenties,” Rooney tells me, “and their relationship had this texture to it because of their history. Eventually, I thought, what if I just went back and just told their story from the beginning, chronologically.” 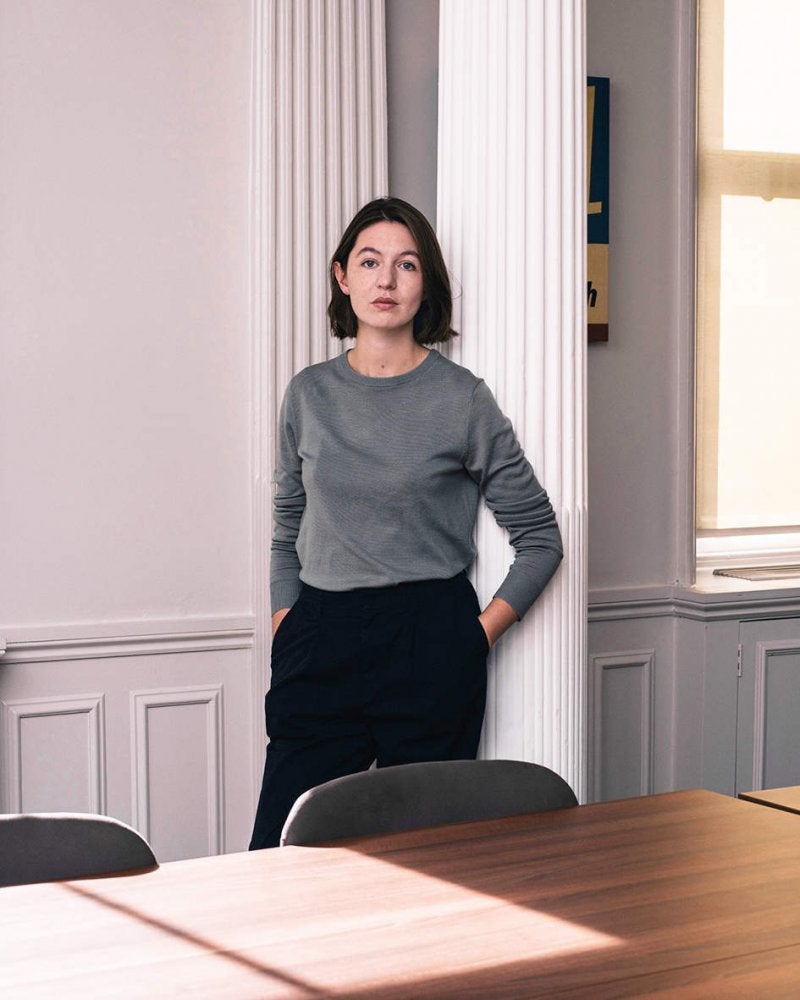 Sally Rooney, photographed for the New Statesman in London by Kalpesh Lathigra

Rooney was born in 1991 in Castlebar, County Mayo, which she describes as “a very bookish part of Ireland”. Her mother, Marie, ran the local Linenhall Arts Centre; her father, Kieran, worked for the state telecom company. They raised Rooney – who is a middle child with an older brother and younger sister – “in a socialist tradition”.

Many of her characters form intense relationships in their teenage years that they carry into adulthood. Rooney’s experience was not really the same. “I couldn’t quite get the hang of how to socialise as a teenager,” she says, picking at the fabric of her green armchair. “I didn’t really understand it.”

It was at Trinity College Dublin that Rooney made “the friendships that have mainly been the big friendships of my life”. In the acknowledgments of her first book she thanks two such friends for their conversations, from which she “drew a great deal”, as well as her partner John Prasifka, a recently qualified maths teacher, whom she met at the debating society. “That was the first time that I’d had friendships that revolved around conceptual, political discussion.”

The relationships in Rooney’s novels have an intensity that nourishes her characters, but at times seems almost unbearable for them. Does she think they are healthy?

She pauses. “What does it mean to have a healthy relationship? It’s such a strangely clinical way of talking about interpersonal dynamics, like you can do a white blood cell count and say: ‘No, it’s not looking good for that one.’ It’s impossible to have a loving relationship in which you never cause pain and no pain ever is caused to you.”

We might be living in a time of increased sensitivities to power dynamics, but a relationship can never be “unproblematic”. “No! No, it can’t. It can’t,” she says, sitting forward. She finds the modern conversation around relationships frustrating at times and considers the terms “gaslighting” and “emotional labour” maddeningly misused. “Obviously, I don’t mean to say, ‘Actually, women are obliged to do emotional labour’, but I think we all know that we have obligations to our loved ones.”

She goes on, with a good-humoured frustration, as though she can only laugh at how obvious it all is. “People are fundamentally very dependent! Like, when you’re a baby, you depend on other people to look after you, or you will perish. If you’re an adult, you still need people to farm your food for you and make your clothes for you: you’re dependent on them, or you will perish.”

It’s usual for Rooney’s thought process to develop in this way. When I ask if she is a romantic, she says yes, but quickly glides into a lengthy discussion of whether her instinctive fondness for families is compatible with her suspicion of patriarchal nuclear families. Relationships, she explains, can never be free from power struggle, and writing a novel full of them is “about being sensitive to how important those power disparities are, but also understanding that it’s not like they exhaust the complete experience of what it means to be a human being or to be with someone else”.

Her books have been praised for their sex scenes, written without awkward eroticism but still capturing the intensity of the experience. Rooney writes of Connell and Marianne in Normal People: “He likes to get very deep inside her, slowly, until her breathing is loud and hard and she clutches at the pillowcase with one hand.” Marianne’s relationships with other men are characterised by violent, rough sex. Afterwards, “her body feels like a carcass, something immensely heavy and awful that she has to carry around”.

“I’m not saying that people who have traumatic or abusive family relationships in childhood later seek out violent sexual partners,” Rooney emphasises. “I hope people didn’t feel that I was criticising sexuality. Or, more specifically, Marianne’s sexuality. I actually don’t care what people think I’m saying about heterosexual men. Maybe this is a controversial thing to say, but I don’t think the sexualisation of violence towards women by straight men is a good thing. And it’s very mainstream.”

The potential for unexpected pregnancy appears in both of her novels. A few months before Normal People was published, Ireland voted to repeal the eighth amendment to its constitution, opening the way for legal abortion. Rooney wrote powerfully about the issue in the London Review of Books. “For Irish women who have relationships with men,” she tells me, “the thought of having to travel to secure reproductive healthcare is always present. It’s the dot on your field of vision that doesn’t go away. And to have that dot removed is very strange”.

Rooney often describes herself to interviewers as “boring” or, even more frequently, “normal”. But, I suggest, in her novels, characters like her often feel abnormal. “I’m in favour of the idea of being normal,” she says. “Being able to think, OK, my relationships are normal, my thoughts and feelings are normal.” She smiles. “I’m quite comforted by the idea that my life is normal.”

This article appears in the 12 Sep 2018 issue of the New Statesman, The return of fascism