On Tuesday, the CEO of the Serpentine Galleries, Yana Peel, resigned following an investigation revealing that a regulated, institutional fund, managed by her husband’s private equity firm, had acquired a large stake in a cybersecurity firm whose technology is alleged to have been used to monitor human rights activists and spy on dissidents.

While visitors to the gallery in Hyde Park have been absorbed by the mesmerising graphic designs of the 20th-century spiritual healer Emma Kunz and the transcendental paintings of Lurchita Hurtado, Peel’s resignation has served as a reminder of the art world’s long history of association with questionable sources of money.

Peel, who was born in St Petersburg before emigrating with her family to Canada, began her career at Goldman Sachs in London. In 2003 she co-founded the Outset Contemporary Art Fund, a charity that supports artists in funding new commissions, and in 2009 she co-founded a not-for-profit platform, Intelligence Squared Asia, which hosts live debates in Hong Kong. On her appointment as CEO of London’s Serpentine Galleries in 2016, Peel spoke of her mission to promote a “socially conscious Serpentine”.

The Serpentine Galleries has not named Peel’s association with Novalpina as the reason for her resignation. In a statement, the gallery stated only its “gratitude and regret” at her departure. The statement highlights all Peel has done in contributing to the gallery’s “mission, visibility” and – notably – “financial standing… increasing support and donations, overseeing ground-breaking exhibitions, and expanding the Serpentine’s programme”. 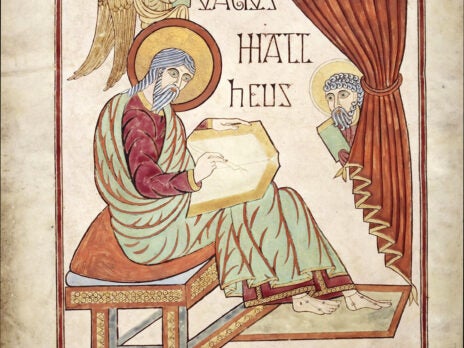 How the Lindisfarne Gospels became an emblem of Englishness

Peel has responded that critics of NSO Group are “misinformed”, while the company itself has stated that its products are used by law enforcement for legitimate activities. Peel’s own statement named “misguided personal attacks on my family and me” as the reason for her departure. “These attacks are based upon inaccurate media reports now subject to legal complaints. I have decided I am better able to continue my work in supporting the arts, the advancement of human rights and freedom of expression by moving away from my current role”, she wrote.

During her tenure, Peel worked with companies including Google and Bloomberg to meet the gallery’s annual fundraising targets of £9.5m. She also developed the gallery’s digital engagement strategy, launching initiatives such as Serpentine Mobile Tours and virtual-reality “translations” of exhibitions. Asked for a statement regarding the gallery’s relationship with outside investment, the Serpentine clarified that Peel’s investment with Novalpina is a personal matter that is not related to the gallery’s funding. As an educational arts charity, the Serpentine relies on support from partners and sponsors who have no involvement in the gallery’s artistic programme.

NSO Group has been the subject of controversy since 2016, when security researchers linked the company to malware sent to the phone of a human rights lawyer in the United Arab Emirates. Danna Ingleton, the deputy director of Amnesty Tech, told the New Statesman that the firm’s surveillance technology appears to be able to compromise a phone using a missed Whatsapp call, without requiring the victim to open a “bait” message by clicking a link. She said:

Because of the invasive nature of this tech it needs to be regulated: companies selling it need to carry out due diligence to ensure their tools are not being used for human rights violations and states need to ensure they do not use it as a tool of repression against civil society.

In the case of NSO specifically we have case after case surfacing that shows this due diligence is not being met. A number of HRDs [human rights defenders], journalists, parliamentarians in Mexico, an Emeriti activist, a number of Saudi activists, and one of my own colleagues at Amnesty have been targeted with this spyware.

Peel’s resignation comes as the art world begins to confront its sticky dependence on unethical funding and questionable sponsorship. In March this year, the National Portrait Gallery publicly refused a £1m grant from the Sackler family, becoming the first major art institution to decline such an investment. The refusal, led by the American artist Nan Goldin, came after a number of leading members of the family faced lawsuits over their alleged role in the US opioid crisis. Less than a week later, the Tate Galleries and New York’s Guggenheim Museum said that they did not plan to accept future gifts from the Sacklers, suggesting that the ripple effect of high-profile refusals is underway.

However, the National Portrait Gallery continues to work with BP, one of the world’s biggest fossil fuel producers, as the sponsor for its annual portrait award, despite pressure from climate activists to sever ties with the oil company. Earlier this month, leading artists including Gary Hume, a judge for the award, wrote to the gallery’s director, Nicholas Cullinan, calling for a stop to the gallery’s associations with BP. This was to no avail – the BP Portrait Award 2019 was handed to Charlie Schaffer on 10 June.

The relationship between art and unethical investment has a long history – so much so, that it’s almost impossible to see how the art world would survive without being propped up by funds from dubious sources. The Medicis – the Italian banking family and political dynasty that grew to prominence in 15th-century Florence – set the standard for this. The family cultivated a political environment in which art flourished, so long as they had the money with which to sponsor it. An exhibition at Florence’s Strozzi Palace in 2011, “Money and Beauty,” examined the relationship between the modern banking system and the Renaissance. Is the recent increase in galleries choosing to refuse unethical donations finally bucking a trend that has continued for centuries?

In July last year the Los Angeles street artist Shepard Fairey was among a number of artists who called for their work to be removed from an exhibition at London’s Design Museum after the institution hosted a private event associated with Leonardo, an Italian aerospace company which is estimated to be the world’s ninth largest arms company. The artists won – and around a third of the work on display in the “Hope to Nope: Graphics and Politics 2008-18” exhibition were removed.

One event at a time, artists and activists are questioning the moral standards of the institutions showing their work. But there isn’t an obvious consistency with what institutions are and aren’t giving in to. Dr. Chris Garrard, co-director of Culture Unstained, an organisation which aims to end “fossil-fuel sponsorship of culture”, said:

The National Portrait Gallery’s decision to reject a grant from the Sackler Trust was hugely significant because it was a recognition that ethical red lines do exist and cultural institutions are prepared to take an ethical stand on sponsorship. It is the responsibility of museums and galleries to not simply conserve their collections but defend them from the cynical motivations of those such as BP, who view the arts not as something to deepen our understanding of the world but as a tool for rehabilitating their toxic brands.

If the National Portrait Gallery wants to demonstrate that they take this responsibility seriously, they would subject BP to the same ethical scrutiny as the Sacklers. Our respected cultural institutions need to be consistent and accountable in how they apply their ethics to fundraising – failing to do so risks undermining the public’s trust.

Galleries apparently consider “ethical scrutiny” to be applicable in some cases and not others. For culturally valuable and influential institutions to maintain the public’s trust, as Garrard points out, they need to consider their responsibility in promoting ethical standards, questioning origins, and not merely accepting money for money’s sake.

But the money must come from somewhere. Research from Arts Council England earlier this year showed that 74 per cent of arts organisations had been affected by public funding cuts. If major art galleries are to continue exhibiting world-renowned artists, they require funding, and the UK government won’t always be able to offer as much as they require.

Tiffany Jenkins, a writer, critic and Honorary Fellow of Art History at the University of Edinburgh, sees the problem as inherently built-in to the purpose of arts institutions. She said:

The responsibility of cultural organisations is to care for and cultivate the arts and to make them as accessible to as many people as possible. Sponsorship, whether by philanthropists or by corporations, facilitates this. As does state support; which also has its issues: strings attached, as well as dubious political associations. No money is totally clean, or neutral.

When taking money, arts organisation have to ask: what are we getting for the money; what does it enable us to do? Working with a multiplicity of supporters, ideally, corporate, state, and public-giving, helps to ensure the independence of the arts. It means organisations are not reliant upon one funder, or too easily influenced. It means they can afford to be experimental. Sponsorship may not solve a number of social and political problems, but nor does refusing that money. What it does is allow the arts to flourish – which is a social good.

Updated February 2020 Following a legal complaint, the Guardian removed its article of 14 June 2019 and apologised to Mrs Peel. We are happy to clarify that Yana Peel is not, and was not, personally involved in the operation or decisions of the regulated Novalpina Capital investment fund, which is managed by her husband Stephen Peel, and others. Mrs Peel was not involved in any decision-making relating to the fund’s acquisition of NSO. Mrs Peel only has a small, indirect and passive interest in the fund. She does not own, whether directly or indirectly, any Novalpina Capital entity or any stake in NSO Group.