“I get distracted by transience,” says Holly Herndon as we wait for the lift to take us up to a quieter floor. We had started our interview in the hotel’s lobby, perched on high stools, but the clatter of cups and saucers and the whirr of a coffee machine had the usually expertly eloquent Herndon losing her train of thought. “This is too loud for me, I get distracted easily.”

Up a few floors, sitting on the carpeted floor outside the lift, which will luckily only ding and open a handful of times throughout our conversation, Herndon is far more relaxed, back to her spirited self as she sits with her legs curled up, a white cotton tunic hanging over black leggings. The 39-year-old electronic musician, born and raised in Johnson City, Tennessee, and now based in Berlin, is in town for her largest London show to date, at the Barbican Centre. She’ll be playing music from her latest album, PROTO, a splutteringly ambitious vocal ensemble record. “Our ensemble consists of eight human beings, an artificial intelligence and a developer,” Herndon states, proudly.

Herndon is different from most electronic musicians, or at least the stereotype, in that she is distinctly interested in humankind and our relationship with technology, not just the tech itself. “I didn’t grow up pulling apart computers,” she admits. “I was actually kind of scared that I would press the wrong button and it would explode or something.” That was until she started studying for a masters degree in electronic music at Mills College in Oakland, California. Struck by the flexibility afforded to her by using a computer as an instrument, she left her familiar double bass behind.

After Movement, the 2012 album Herndon wrote while at Mills, which documents her initial interest in laptop-based electronica, and Platform (2015), which is concerned with the surveillance technology exploited by social media platforms, for her third record, Herndon turned to artificial intelligence (AI). On PROTO, she explores “how AI is really an extension of a greater collective human intellectual process.”

The AI she created, with her partner Mat Dryhurst and developer Jules LaPlace, is a “baby” known as “Spawn”. Spawn was born from a grant which allowed Herndon and Dryhurst to buy a graphics processing unit (GPU) rig, an electronic circuit which efficiently processes and buffers data. Of course, Herndon makes it sound simple: “Mat ordered the parts off Amazon,” she laughs, “and she came in the mail and we put her together. And then Jules came over and we installed a bunch of software and started recording data sets and we just dove in.”

Over a series of months in their Berlin studio, Herndon and an ensemble “fed” Spawn with their voices. The AI works by using neural networks, taking in human voices and working out, statistically, what sound might come next. “It’s sculpting,” Herndon explains – even though the ensemble sings in English, what Spawn comes out with is “nonsense, because it’s just splice by splice.” The resultant sound is so similar to Herndon’s voice that on PROTO, it’s often difficult to pick out which notes are Herndon’s and which are Spawn’s. Herndon helps me out: “You first hear Spawn come in on ‘Birth’, she says, after the ensemble opens you hear her go ‘eh eh eh eh eh eh eh…’ It’s really funny.” Even after so many months training, listening to, and explaining her AI, Herndon still cracks up when trying to impersonate her.

Using “machine learning” – which Herndon suggests is “a better term than AI” – in music is nothing new. The technology has most often been used to analyse the compositional logic of an individual composer (Bach, for example), tracing the relationship of notes and rhythm in order to recreate that style infinitely. But Herndon isn’t interested in getting caught up in that cycle. “I think music should be responding to today’s material conditions. It makes no sense to try and recreate something from the past in that way. It gets you into an aesthetic cul-de-sac and feedback loop, if you’re constantly relying on this canon of yore.” 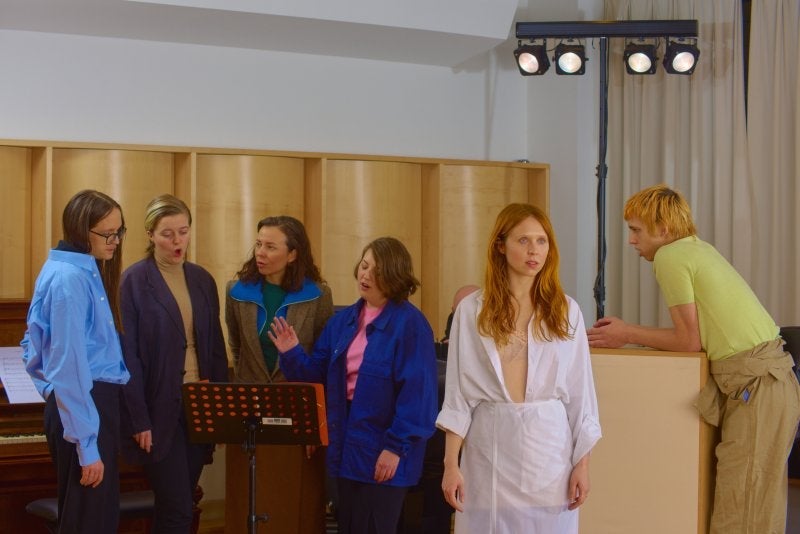 Spawn has given Herndon and her ensemble a new lease of life. At Mills, where many of her contemporaries were making laptop music, Herndon noticed how many performers would play live sets by simply staying put behind their screens. “It seems odd to just stand there,” she thought. “Let’s take it to the next step. Let’s reinsert ourselves as people into this highly mediated scenario. The computer can be this brain which keeps everything running, and then we are totally freed up to emote and express and enjoy each other onstage.”

At the Barbican the following evening, the sense of freedom Spawn has given Herndon is stark. Spawn is not yet developed enough to bring on tour: Herndon, Dryhurst and LaPlace are still working on bringing her latency down to just a millisecond, so that she can react, live, to their performance (there is, too, something strangely pertinent about a baby not yet being old enough to go on tour with her parents). But the sensibilities they learnt from recording with Spawn still ring out: Herndon interacts joyously with her five-piece vocal ensemble as they sway, jump and cavort with unhinged giddiness. Figuring out how to best navigate the right technology, Herndon says, “should free us up to be more human together.” Her show, unsurprisingly then, is wildly uninhibited.

Herndon is careful not to extend the baby metaphor too far – “I mean, she’s an inhuman machine-learning baby,” she clarifies – but it is a helpful way of expressing how raising a nascent intelligence is a communal responsibility. Herndon refers to Spawn as “she” – the first utterances she produced mimicked Herndon’s female voice, after all. But, although speaking of Spawn with such affection has her grinning, Herndon is hyper-aware of the ethical concerns of humanising – and feminising – an AI in this way. The pronoun usage, she says, has been “controversial with some people. There’s a history of people abusing female digital assistants, and research shows that that translates into the real world, of people being cruel to their human female assistants.”

Ethical consideration is high up on Herndon’s list of priorities. At the Center for Computer Research in Music and Acoustics (CCRMA) at Stanford University, where she successfully defended her PhD dissertation earlier this year, Herndon took a class in the ethics of computer science. Stanford’s computer science department has, she tells me, “come under a lot of fire because people criticise it for producing worker-bees for Silicon Valley instead of promoting free-thinking.” For members of the department, the class was compulsory; for Herndon, based in the CCRMA, it was an elective. “I don’t want to shit-talk anyone”, she prefaces, but when the class broke out into discussion groups, she realised she was surrounded by “very young, very bright people who will go on to make profound decisions for the wider world, and some of them hadn’t even considered why privacy is important at all.”

Herndon has made sure to develop her own informed opinion about these ethical conundrums, which, she says, at times can be “sticky”. By training Spawn with original audio material rather than the “data scraping” which a lot of machine learning relies on (“Lord knows who it belongs to or where it came from”), Herndon knows exactly who participated in the creation of Spawn’s data sets. “Data scraping anonymises human efforts and creates the illusion of the AI being this mythical, all-knowing figure. We, however, know who we’re recording and can pay attribution.”

These ethical decisions, Herndon explains, may seem small, but with technology developing so rapidly, it is crucial that each new arrangement is carefully considered before it is taken as given and cannot be reversed. The name PROTO has to do with the protocol layer, “essentially just an agreement in a community of what’s OK.” She uses the early days of the internet as an example:

“Someone made a decision that you can copy and paste and you don’t have to pay attribution. That didn’t have to be the architecture of the web but that decision was made at the protocol level, and because of that, it spiralled out of control. Now you have the age of the curator where everything is just about pulling from everywhere else. You don’t think about context, you don’t think about who made it or how or why, it’s just about pulling all of that onto your own platform and then monetising that yourself. That was a decision that was made, it didn’t have to go that way.”

If all of this sounds both technologically and ethically demanding, I should reiterate: at its crux, PROTO is a vocal ensemble album. At every step of the way, Herndon hopes to create “entry-points” for listeners. “There are songs!” she affirms. “I want people to feel like they have something to latch onto, and then maybe I can take them on some weird trip somewhere else. There are a cappella vocal parts all over this record – maybe they’ll reach people who might not normally be attracted to electronic music, per se.” After all, the human voice is the very first thing we hear as babies. Hearing it repeatedly on PROTO, even amongst distortions and synthesisers, keeps us grounded.

As we stand up – Herndon to head over to the Barbican for pre-show rehearsals, me to head down to the Tube – the lift opens with a familiar ding, making Herndon laugh. “I hope I was focused enough. I get distracted so easily. I’m like a dog when a squirrel runs by.”