I was introduced to the Greek island of Hydra, a two-hour ferry ride from Athens, by a gaunt Samuel Beckett scholar who thought I would like the swimming. He told me there were plenty of opportunities to dive off rocks into the open sea. He also recommended a volume of Beckett’s letters to take with me.

I took him at his word and he was right about everything.

While I was frolicking in the turquoise Aegean on a hot August day, watchful for the sea taxis that whizzed at speed from Hydra port towards the handful of tiny commercialised beaches, one of Beckett’s letters from the volume recommended by the gaunt scholar came to my mind.

More and more, my own language appears to me like a veil that must be torn apart in order to get at the things (or the Nothingness) behind it. Grammar and Style: to me they seem to have become as irrelevant as a Victorian bathing suit, or the imperturbability of a true Gentleman. A mask.

Gazing down at the spiky urchins beneath my feet, I asked myself if I regarded language as a veil that must be torn apart to get at things? Yes, I did, for sure. I headed away from the rocks and accelerated into a stretch of front crawl. And did I regard grammar and style as irrelevant? This was harder to answer in the here and now because despite the line of yellow buoys that were supposed to be a friendly border between human swimmers and the boats, a sea taxi was speeding towards me.

It was true that I had half-heartedly attempted to get rid of quotation marks around the dialogue in my most recent novel. Most of the contemporary writers I admired had skilfully ditched them and I knew this was the way to go. Yet, in the small hours of a long writing stint in the winter, I had concluded that things were wild enough in my most recent novel any way, and that erasing quotation marks was not my fight. For the time being quotation marks would have to be the Victorian swimsuit in my modernist novels.

The driver of the sea taxi had obviously decided that the yellow buoys were the Victorian swimming costume of traffic regulations. I reckoned he was going to ignore them so I swam back at a pace towards the rock. Someone was standing on my towel. A woman in a pink dress with little fake gold coins sewed on to its hem was throwing bread into the sea. Small fish rose to the surface to nibble the bread. The woman was in some sort of trance as she communed with the fish. She was basically throwing bread at my head. Can you stop fucking doing that, I inwardly screamed, no quotation marks around the silent scream.

I climbed on to the rock, removed a chunk of soggy bread from my hair and began the walk home. It was only then, as I gazed out at the coastline, that I realised the sea taxi had totally respected the grammar of the yellow buoys. It was I who had swam out beyond their border.

The next morning, I woke up at seven while my daughters and friends slept in. I was still wired from a busy year and had forgotten how to relax. It was my pleasure to make Greek coffee and sip it with faux serenity on the stone wall in the garden. A few roosters crowed while they still had the energy before the day warmed up. The chime of bells on goats moving somewhere in the hills was calming and lovely. The sweet, intense scent from the geraniums planted near the wall was exciting, the figs on the tree still unripe, the golden prickly pears on the succulents ready to be picked. My friend Stefania had shown me how to prepare prickly pears in Sardinia one parched summer. I think it involved soaking them overnight in water to tame the spikes. There was always a bowl of prickly pears soaking in her yard.

To my surprise, the cicadas of Hydra suddenly burst into rhapsodic song. The sun was still rising. Surely it was too early to be so loud and keen?

Apparently, only male cicadas sing and their goal is to attract females to their tree. There was a large pine tree in the garden. Just as abruptly, they stopped their siren call, as if to say, no, not yet, too early for sex, this is just a rehearsal for what we can offer you mute females later in the day.

The only drama in the holiday so far had involved a lone cicada the size of a saucer. It had somehow made its way into the house and landed on my daughter’s friend’s face in the small hours of the morning. When she screamed, we all ran to her room, wielding various house hold weapons – a torch, a hiking boot, an ornamental walking stick with a lion’s head carved into the handle. Perhaps the extra-large cicada was a female loner who wanted a break from her singing lover in the pine tree. Can you stop fucking doing that, she silently screamed, as she crashed into our holiday house on the hill above Kamini harbour.

My friend from Berlin sorted the cicada out. It had been an unbearably hot night so we took it in turns to unwind the hosepipe and shower under the fig tree in the garden. The cold, soft water came from a well. It was such a pleasure to take an outdoor shower in the small hours under the fig tree. Really, I would have been happy if it was my last moment on Earth. We sliced open a juicy watermelon and ate it under the stars, all of us sitting on the stone wall like birds on a wire, the song Leonard Cohen had written in Hydra all those years ago. After a while my daughter’s friend had gone back to bed because she had a dissertation for her Master’s degree to finish writing in the morning. A cicada had messed with her schedule and she was haunted by her deadline in two days’ time.

Hydra is romantically haunted by Leonard Cohen and Marianne Ihlen, who met each other and lived here in the 1960s. I had seen Nick Broomfield’s excellent documentary on their love affair and long attachment, Marianne & Leonard: Words Of Love, before I left for Hydra. Actually, I’d shed a tear, when in the film, older Marianne sings along (as I have done for over three decades) to “So Long Marianne”. 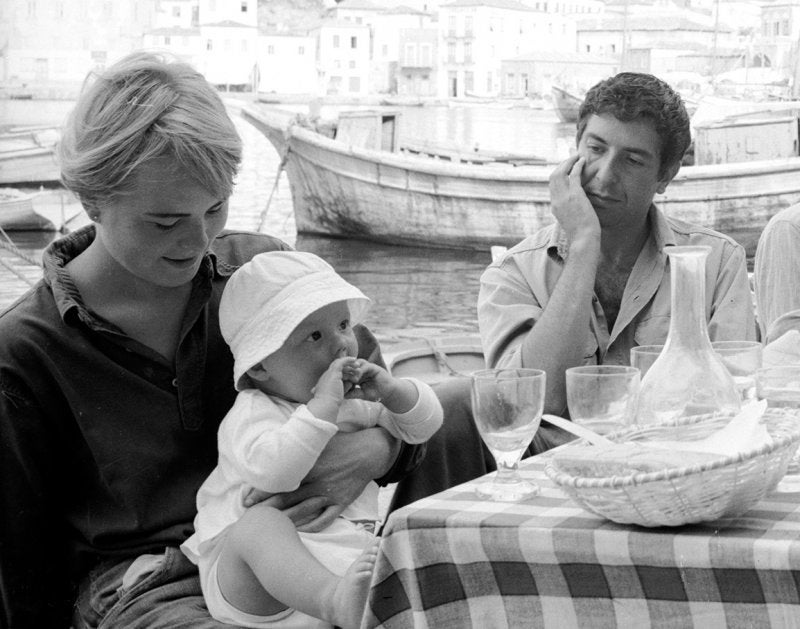 All the same, it was Leonard who had the great talent. In my view, that is the more subversive part of their story. To be able to seduce the world with one’s great talent is an interesting subject; perhaps a slightly taboo subject when it involves, as it often does, a partner who is less ambitious and driven, but more talented at loving and life.

My favourite part of Broomfield’s film is when Cohen, about to burst into intoxicating fame, insists on his band performing in the psychiatric ward of a hospital. His mother spent some time in a similar institution, and so I guessed that this gig was a conversation with her. When he is heckled by an angry patient, he stops playing his guitar and embraces the shouting distressed man. The poet I have known who would have done the same is the late Adrian Mitchell.

When I was young, I wanted my boyfriends to be a bit like Leonard Cohen – dark, depressed, brilliant, charming, always longing for connection but always saying goodbye. And then I couldn’t bear them. Endowed with love’s radiance, who hasn’t felt invincible, chosen, mythic? We have all kicked the can down that road and believed the road will never run out. In Hydra, there is a road named after Leonard Cohen and the local residents are good natured about giving his fans (me) directions to his house.

While I was sitting on the wall thinking about all this, I noticed that my volume of Beckett’s letters, as recommended by the gaunt scholar, had unfortunately been soaked by the hosepipe shower after the cicada incident. I picked it up and placed it in a sunny place to dry out. It was still quite early in the morning and I had been up for hours. Eventually, I would have to give in to sleep, surrender to the bloodthirsty mosquitoes and conquer my fear that the world would fall apart if I ditched quotation marks.

Yes so long grammar it’s time to laugh and cry and laugh about dumping you.

Deborah Levy’s latest novel, “The Man Who Saw Everything”, is shortlisted for the Goldsmiths Prize