For a large tranche of the late 18th and early 19th centuries, the most influential artist in Europe was a now largely under-appreciated Englishman, John Flaxman. His international renown was not, however, based on his primary career as a sculptor of funerary monuments and occasional large stand-alone pieces, but on the numerous illustrations to Aeschylus, Dante and Homer he drew in Rome during a seven-years residence there from 1787 to 1794.

In all, they numbered 210 finished drawings, but when circulated as engravings their effect on European art was profound. Flaxman’s figures and graphic style can be found in the paintings of the two greatest French neoclassicists – Jacques-Louis David and Jean-Auguste-Dominique Ingres; in William Blake and Francisco Goya; in the paintings of the German medievalist Nazarenes and Dante Gabriel Rossetti; in the superheroes of Stan Lee’s Marvel comics; and in the idea of the bande dessinée itself. Goethe (who said the illustrations made Flaxman “the idol of all dilettanti”) and Schlegel were admirers, while William Thackeray admitted that when he wrote the scene in Vanity Fair in which Becky Sharp dresses as Clytemnestra during a game of charades it was Flaxman’s depiction he had in mind.

As is perfectly illustrated by the Royal Academy’s small but elegant exhibition of Flaxman’s Homer drawings, he developed a style that both caught and defined the classical revival at its peak. Flaxman’s friend the painter George Romney described the illustrations as “outlines without shadow, but in the style of ancient art”. Taking his inspiration from Greek vases and the experience he had accrued as a modeller for the Wedgwood pottery manufactory, Flaxman pared his designs ever further back, until they were two-dimensional friezes, with minimal detail, almost no indication of depth or background, and with faces shown, where possible, in profile. This method gave the subsequent engravings by Tommaso Piroli, a former pupil of Giovanni Battista Piranesi, an unprecedented linear purity. They exemplified the core principle of neoclassicism as voiced by the 18th-century champion of Greek sculpture Johann Joachim Winckelmann: true art, he said, should express “noble simplicity and calm grandeur”. 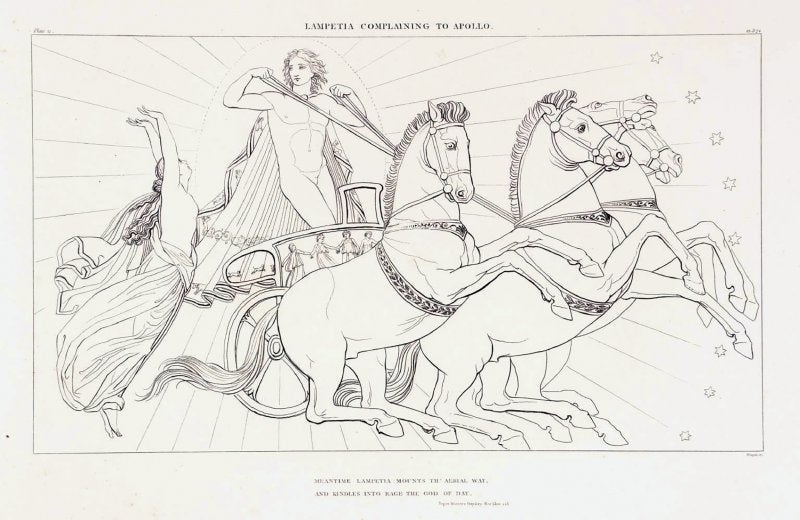 The original 1793 Piroli editions of the Iliad had 34 plates and the Odyssey 28: for their first English editions in 1805 five and six extra plates were added respectively, some engraved by Flaxman’s friend and admirer William Blake, whom he had first met as a fellow student at the RA Schools. The only words accompanying the plates were two-line captions from Alexander Pope’s celebrated translation: the idea was that the pictures could be admired as a salon entertainment while Pope’s text was read out simultaneously.

If the illustrations made Flaxman famous, they did not make him rich. The drawings were commissioned by Georgiana Hare-Naylor, a cousin to a more celebrated Georgiana, the Duchess of Devonshire, and herself an artist who had been a pupil of Joshua Reynolds. She bought the copyright alongside the drawings, for which she paid 15-21 shillings each. Even though Flaxman was not a modest man, the success of his “outline illustrations”, as his new style came to be known, left him somewhat bemused. He considered himself a sculptor and his intention was to turn the illustrations into decorative bas-relief panels “suited to all the purposes of Sacred and Civil Architecture”.

Instead they entered the artistic mainstream, not just as an inspiration for practising painters but as a teaching aid in ateliers where students would be set to copying them: in England the Victorian artistic grandee George Frederic Watts said their use as an instructional tool should be mandatory.

Not everyone was an admirer, however. Some critics thought the illustrations lacked a certain expressiveness, and indeed the original drawings, which Flaxman would later ink over for the engraver, have a subtlety that was often lost in the process. In 1927, WG Constable, art critic of the New Statesman and assistant director of the National Gallery, wrote sniffily that: “With the limitations of his temperament, it is hardly surprising that Flaxman failed to express either the tragic pathos or the heroic energy of Homer and Aeschylus.” While he noted the skill in a drawing such as “Andromache Fainting” he thought “it would better represent a young woman of Flaxman’s time fainting at the sight of her pet dog being run over than one of the most moving passages in the Iliad”.

Others thought it was the artist himself who lacked vivacity. When Flaxman was appointed professor of sculpture at the RA in 1810, the acerbic painter Henry Fuseli left a dinner party to attend his inaugural lecture; his parting words were: “Farewell friends –  farewell wine – farewell wit. I must leave you all and hear a sermon, the first preached by the Reverend John Flaxman.”

His gospel of classicism though, turned Europe’s artists into true believers.