Art historians have long fought against the old stylistic divisions but such catch-all concepts as “the baroque”, “rococo”, “romanticism” and so on have proven hard to cull. So the idea that there is a single pan-European and homogeneous style called the Renaissance clings on, unhelpfully. Just how unfit for purpose it is as a tool of definition – describing a culture spanning the 13th to the 17th centuries – is shown by the small but choice exhibition of seven paintings by the Spanish 15th-century master Bartolomé Bermejo at the National Gallery.

Bermejo (circa 1440-1501) is almost unknown in this country, or indeed anywhere. The National owns one of his works, a deeply eccentric golden painting of 1468, St Michael Triumphant Over the Devil, and there are at most 19 more authenticated works in existence, so he is both an unfamiliar artist and one without the comfort of a familiar stylistic framework. What, after all, did 15th-century Spanish art look like? The fact that some of his nearest contemporaries numbered painters as different as Botticelli (circa 1445-1510), Giovanni Bellini (1430-1516), Dürer (1471-1528) and Bosch (circa 1450-1516) is proof that the real artistic action was taking place in Italy and northern Europe rather than the Iberian Peninsula.

If geography is one reason Bermejo’s work is so odd, so is the fact that he was an itinerant artist – he was born in Córdoba but also worked in Valencia, Zaragoza and Barcelona – who therefore didn’t settle into a regional style. The real influences on his art were the great names of early Netherlandish painting – the likes of the van Eyck brothers, Rogier van der Weyden and Hans Memling. It has been suggested that Bermejo must have travelled to the Netherlands but there is no evidence to support the claim. During his lifetime the Habsburgs inherited assorted provinces in the Low Countries and although he was not a court artist it is clear he saw numerous works that arrived from the north.

Very little is known about Bermejo’s life. He was born Bartolomé de Cárdenas; bermejo means “reddish”, suggesting red hair or a rosy complexion. Hints in his paintings suggest that he may have been a converted Jew – a converso – and he was certainly married to one: his wife was investigated by the Inquisition for not knowing the Creed. There is some documentary evidence that he was unreliable in fulfilling commissions, indeed one contract threatened him with excommunication if the work wasn’t completed. The clause was enforced and Bermejo’s excommunication was lifted only when he renegotiated the contract.

In several instances, to circumvent guild rules that stipulated that painters needed to be local citizens, he worked with lesser artists. But a strong sense of self-worth was nevertheless evident in the higher fees he negotiated for himself and, at Zaragoza cathedral, when he demanded a private space so he could work unobserved.

The paintings in the exhibition show why Bermejo merited special treatment. They display a mastery of the still relatively new medium of oil paint that his peers couldn’t match. Although his first known painting, St Michael Triumphant, is in many ways a Gothic image – it has a gilded background, little perspective, an attenuated central figure, and heavily stylised drapery – it is nevertheless a bravura piece of painting. The spires and domes of Jerusalem are cleverly reflected in the archangel’s breastplate, the pearls and jewels that adorn his armour are stunning pieces of mimicry, the damask of the kneeling donor’s gown shows Bermejo’s alertness to the luxury stuffs made by the Genoese weavers who had established themselves in Valencia. 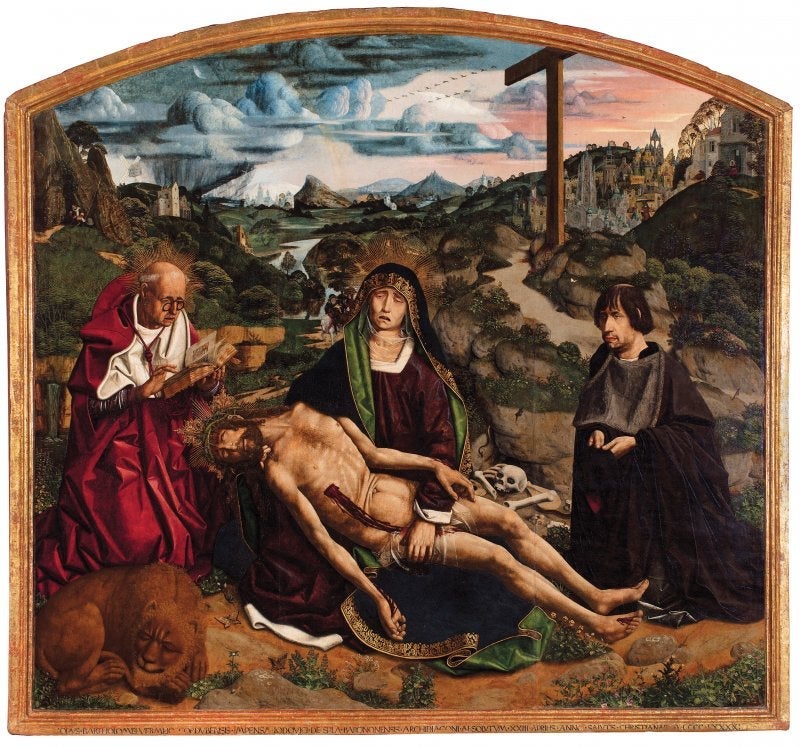 When he came to paint his Triptych of the Virgin of Montserrat (1470-75), he replaced the embossed gilded background with a landscape leading to the sea, of a sort familiar from Netherlandish works. Bermejo hasn’t quite got the perspective right but his mastery of minutiae – the botanical accuracy of the flowers that dot the scene, for example – is immaculate.

By the time he painted the Desplà Pietá for Barcelona cathedral in 1490 he was fully in command of his art. His figures of the grieving Madonna and dead Christ may not be as rounded or as integrated as in Bellini’s prefiguring of the scene in the Virgin of the Meadow of a decade or so later (also in the National) but they are just as expressive. The Virgin’s tears suggest Bermejo had seen van der Weyden’s heart-wrenching Deposition (now in the Prado in Madrid) but he can’t resist idiosyncratic eye-snags such as a trompe l’œil fly on the face of St Jerome’s lion or the chest hair of the dead Christ (I can’t think of another such hirsute depiction in 15th-century painting). Elsewhere, in an altarpiece panel showing the Ascension, the floating Christ leaves footprints in the grass below, while in a scene depicting the birth of the Virgin the plaster on the wall has a chunk missing, indicating her humble origins.

For the beguiling Bermejo, the big picture was to be found in the smallest details.

Newsletters from the New Statesman View all newsletters
Subscribe for the best of our politics, international affairs, culture and business coverage, straight to your inbox
THANK YOU
Topics in this article : Artists