There’s something about empty swimming pools. JG Ballard kept coming back to them in his brutal cityscapes, the symbol imprinted by that first drained pool at his parents’ villa in wartime Shanghai. There are the pictures of abandoned pools from the 2004 Athens Olympics, algae-ridden tombs to squandered cash and failed legacy – already so decayed they seem from a long-distant past. Perhaps it’s the altered state that’s unnerving, like the shocking mass of a boat’s hull in dry dock, something not meant to be seen is exposed to light.

Artists Michael Elmgreen (Danish) and Ingar Dragset (Norwegian) have worked as a duo since 1995, mainly in sculpture and installations that play with and subvert architecture. Their work has a cheeky wit and gay sensibility that pokes fun at the mainstream. Perhaps best known for their 2012 boy on a rocking horse on the Fourth Plinth in Trafalgar Square, they have also turned part of the V&A into a fictional architect’s apartment, the Victoria Miro gallery into a nightclub and plonked a Prada boutique in the Texan desert.

For this retrospective at the Whitechapel Gallery, the duo have devoted the lower galleries to a derelict public pool, in the process reconfiguring the architecture into something entirely new. It is a disused Edwardian baths, bequeathed to Tower Hamlets in 1901 by philanthropist John Passmore Edwards but closed amid cuts in the 1980s. During Boris Johnson’s time as mayor, the site was sold to “GenTri Investment” to be redeveloped as the “Desert Flower Art Hotel & Resort” and luxury spa. We are its final visitors, witnesses to its long decline.

This is all a construct. There never was a Whitechapel Pool and the gallery itself opened on this site in 1901. And yet there are half-truths: the east wing was until 2005 the Whitechapel Library, whose function was replaced by the shiny “Idea Store” nearby. Up the road in Bethnal Green, York Hall is a 1920s boxing venue and pool that had one of the last traditional steam baths, where cockneys and cabbies used to schmeiss each other’s backs. In 2007, it reopened as Spa London, pricing out most of its former clientele. Over in Shoreditch, Chariots Roman Spa, a former gay sauna, awaits the wrecking ball.

The pool captures something of this sense of loss – the gentrification of public spaces, the exclusion of communities, the sanitising of places that, if not explicitly “queer”, have a blurred feeling of homoerotic potential. Everything is hyper-realistic but playfully fake. The floor is lined with cracked tiles, walls painted institutional Fifties green; there is peeling paintwork, mould. In the empty pool detritus has accumulated – dust, leaves, a plank bearing a fag butt.

But the scale is too small; there’s a fallen classical statue at one side and in another corner a trampoline weighed down by a comical silver meteorite that has crashed through the skylight. A door to the changing rooms is, absurdly, unopenable, with a handle at both sides; two urinals connect suggestively by sinuous steel tubing (Gay Marriage, 2010). We are at once thrust back into the familiar world of the public pool, with its gritty footbath, ankle bands and shrill lifeguard’s whistle. Yet there’s only silence – a memorial to past pleasures and shared space. 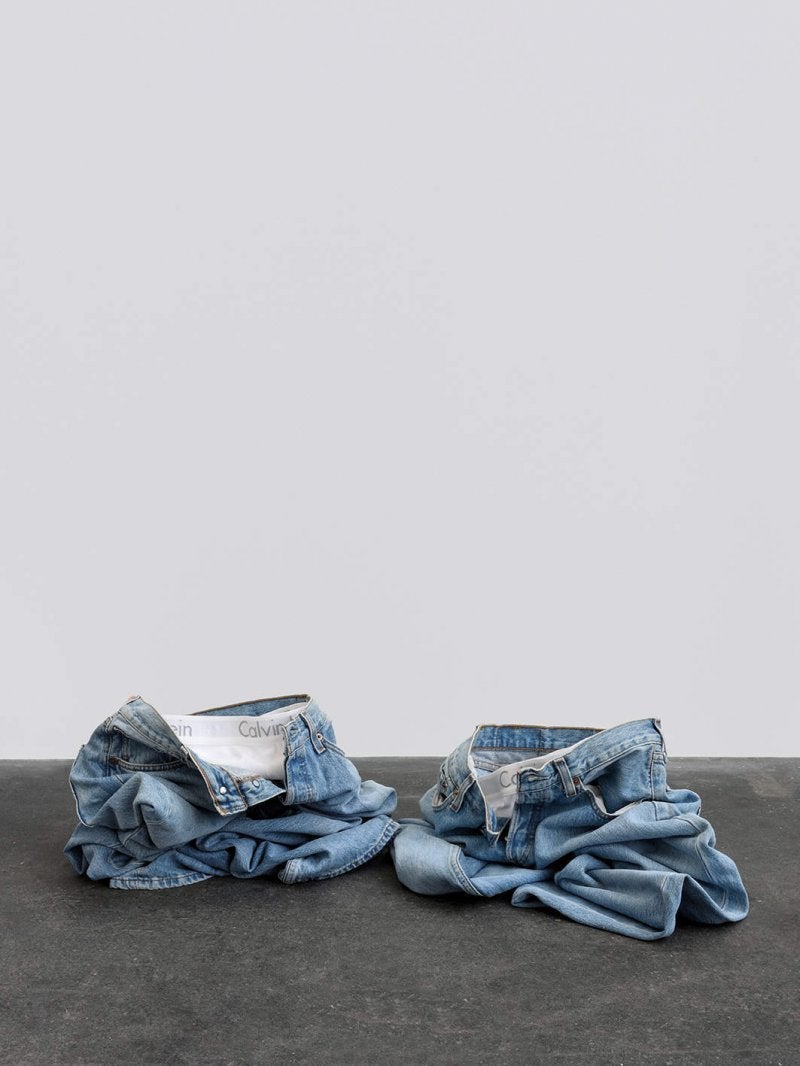 If the pool invites total immersion, the first of the two upstairs rooms is more impermeable. It is hung with vastly magnified wall labels to artworks by other artists, the notices rendered in engraved marble to resemble plaques. Provocatively, this entire series is entitled Self-Portraits and the referenced artworks, by Martin Kippenberger, Mark Morrisroe, David Hockney, Louise Bourgeois and others, build up a collage of the duo’s early influences. The black-text titles hint at sexual longing, youthful experimentation, loneliness – as well as homage to an earlier generation of gay artists and activists. But nowhere are the artworks themselves depicted, and only later – through googling the works, in my case – do the vivid images burst to the surface. A very non-“selfie” version of self-portraiture, for sure. 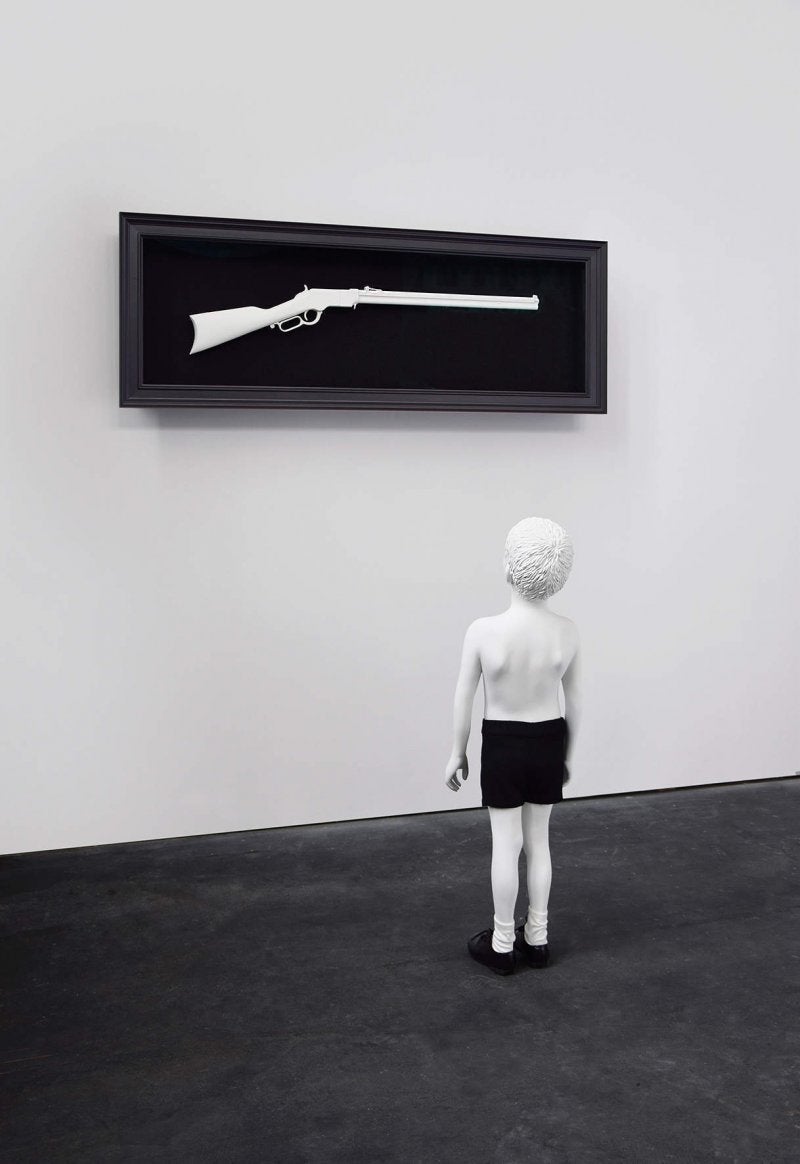 En route to the main room, you pass a pair of crumpled jeans and white Calvins, as if two boys have just slipped out of them and are getting it on in a backroom (Powerless Structures Fig. 19, 1998). It’s a playful prelude to the dramatic temple beyond in which examples of their hard-edged, figurative sculptures are spotlit in a succession of alcoves. Eerie and comical, the recurring cast includes the forlorn little boy – here gazing shirtless at a gun on a wall, or cowering in a black onyx fireplace – the robot-like pregnant white maid, the capitalist-symbol vulture preying on a nest, a lone judge’s wig.

The sculptures, drained of colour, are like Canova marbles cross-bred with shop dummies – a fitting blend for the duo’s irreverent mash-up of high and low culture, of shiny surface and hidden depths.

Elmgreen & Dragset: This Is How We Bite Our Tongue
Whitechapel Gallery, London E1, until 13 January

This article appears in the 31 Oct 2018 issue of the New Statesman, The Great War’s long shadow