Before I went to see Black Panther, I had no idea whether or not it would be any good. That might sound strange, given the positive buzz around it, but I did have a nagging suspicion that “being nice about the first black-led Marvel film” might have got mixed up with “parading my anti-racist credentials on social media”.

Well, that suspicion was an unworthy one. Black Panther is not just smart and politically aware for a superhero film – it’s smart and politically aware, full stop. Its central conflict springs from its alternate-reality vision of Africa: specifically, a country called Wakanda, home of the world’s only reserves of “vibranium”. This has allowed Wakanda to become more technologically advanced than the West – “it’s as easy as riding a hoverbike”, the country’s chief scientist says to a bemused American at one point – and it has not only never been colonised, but never been mapped. It hides its lush plains and skyscrapers inside a holographic mountain.

A rare, mystical natural resource might be a staple of fantasy films (think of Avatar’s Ronsealishly named unobtainium), but putting it in the middle of Africa gives the film both a historical resonance – untold misery was caused by the 19th century efforts of European powers to secure the continent’s mineral wealth – and a contemporary one. It’s impossible to make a smartphone without rare earth metals, and some of the places where these are found, such as the Democratic Republic of Congo, suffer from what economists call a “resource curse”. Without strong governments and infrastructure, the vast wealth obtainable by mining creates opportunities for corruption, and funds militias and civil wars.

Rare resources also attract vultures: which is exactly what Wakanda’s rulers fear. If they share the source of their power,  and give away their only advantage over the West, how will they be treated? A glance at their continental neighbours would be anything but reassuring.

That question – could you honestly advise Wakanda to share its vibranium with the world? – is interesting enough. But the film’s politics go even deeper, into uncomfortable questions about culture and immigration. All Wakandans have a tattoo on their inner lips, which grants them access to the kingdom: it’s a border control system that would make Theresa May swoon.

Early in the film, King T’Challa (whose alter ego is the superhero Black Panther) discusses with one of his closest advisers whether or not they have a duty to their fellow Africans, particularly refugees. W’Kabi (played by 28-year-old British actor Daniel Kaluuya) offers an argument we are more used to hearing from Trump voters in those worthy American newspaper profiles of flyover states: won’t mass migration mean the end of our unique culture? Putting that sentiment in the mouth of someone from an uncolonised African country is deeply provocative, helping audiences scale what the anthropologist Arlie Russell Hoschchild calls an “empathy wall”. The film ultimately rejects W’Kabi’s position, but it does give it space to be heard.

There’s another layer of sophistication to the political allegory here. The film’s true villain is not the white South African arms dealer Ulysses Klaue (although the parents who gave him that name really only have themselves to blame that he turned to crime and prosthetic augmentation). It’s the deeply conflicted figure of Killmonger, King T’Challa’s first cousin. 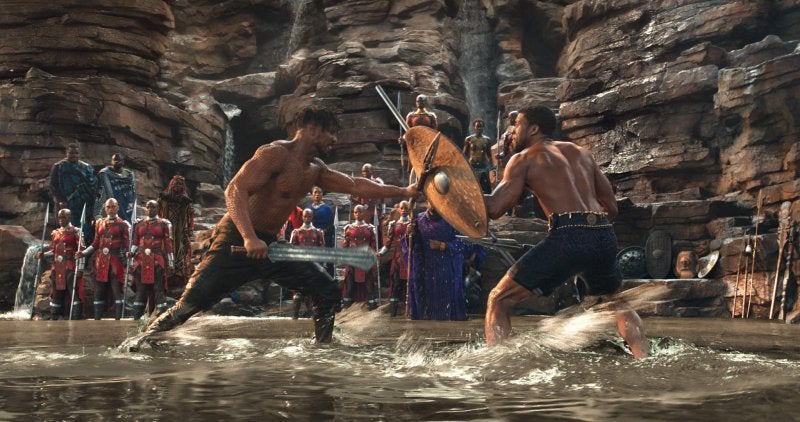 The king’s father killed his own brother back in 1992 after discovering that he had arranged the theft of a cache of vibranium. The plan was to distribute it to black people around the world, so they could rise up against their (white) oppressors. “I think the best villains are ones that have a point of view that’s relatable and that you can empathise with,” screenwriter Joe Robert Cole said in a recent interview. “Sometimes it’s how far you take things that makes you a villain, and not necessarily the perspective.”

Again, the film gives Killmonger’s argument space to breathe. Raised by a single mother in America, when his dead father asks him in a vision why he has no tears for him, he says that life is cheap here, meaning: black life. The Wakandans are not pacifists – Black Panther can, and will, kill people with his claws – but Killmonger experiences violence as chaotic, meaningless and random. He has been brutalised by the reality of life as a black man in America, and later as a soldier in America’s foreign wars. How radical is that: a $200m Hollywood film where the villain is a personification of America’s domestic and foreign policy?

There is so much more richness in the movie that (I hope) it will inspire a generation of film students. How should we react to a king and his subjects making monkey noises at someone in an ethnic minority, trying to intimidate him into silence? (In this case Martin Freeman’s white CIA agent.) How do black Africans feel about the film’s essentially American perspective, implying a commonality between black citizens in countries with such huge disparities in average income? How do the kind of internet writers who worry about “cultural appropriation” feel about a cast which includes black British, West Indian, Zimbabwean-American and German actors doing Xhosa accents? (“The implicit statement in both the film’s themes and its casting is that there is a connection, however vexed, tenuous, and complicated, among the continent’s scattered descendants,” noted Jelani Cobb in the New Yorker.)

As a white British viewer, the most uncomfortable moment for me was when Killmonger promises that the “sun will never set” on the new Wakandan empire. It reminded me of the developed world’s anxious hope for the future: that the rising nations of the world will treat us better in their pomp than we treated them in ours.