In the mid-1970s, New Yorkers reacted to their city’s looming bankruptcy and the rest of the country’s cold-shouldered indifference in classic New York style. Among the crumbling infrastructure, crime, unemployment and poverty, it was suddenly party time. Left to its own devices, a generation of musicians, artists, film-makers and writers was finding new ways of expression, from the south Bronx b-boys to the punks in downtown Manhattan.

The separate scenes began to find each other, to converge and create a look and sound that, though emblematic of their time and place, still inform much of our popular culture. Such a fertile environment was the perfect space for a young, ambitious New York artist such as Jean-Michel Basquiat.

Dirt-cheap rents attracted adventurous newcomers to lower Manhattan, despite its reputation for dank tenement blocks and drug dens. Patti Astor, who ran the FUN Gallery with her partner, Bill Stelling – the site of one of Basquiat’s earliest and best-loved shows – moved to the East Village in 1975. “I remember when I told my friends that I was going to live there, they all said, ‘Oh, my God, you’ll get killed, you’ll die over there,’” she says. “I thought it sounded great. There were all these Russian places you could go to, where beers were 50 cents and you could play pool with these old guys. But really the only bar was CBGB. You wouldn’t stay in your apartment because your apartment was a shithole. So you went out. And there we were at CBGB, every night.”

Richard Boch, a former doorman at the much-loved Mudd Club in the Tribeca neighbourhood, says that the burgeoning club scene was a focal point for like-minded people from across the city. “This was a pre-tech world. There was no instant anything, so word of mouth had to do a lot of the work. You had to get out and go somewhere to find out what everyone was up to.”

In the late 1970s and early 1980s, the initial rush of New York punk rock began to develop into something more considered, a bit artier and increasingly with a dance-floor edge. Blondie would close their sets with a cover version of Donna Summer’s “I Feel Love”, while Talking Heads were growing ever funkier. CBGB wasn’t really a dance kind of place, but the just-opened Mudd Club was perfect for the newer “No Wave” outfits such as the Contortions, DNA and Teenage Jesus and the Jerks.

In 1979, the Mudd Club regular, trainee banker and budding artist Michael Holman read an article in the Village Voice about the uptown graffiti collective Fabulous Five. He got in contact with the group’s leader, Fab 5 Freddy (born Fred Brathwaite), and the two immediately hit it off, finding plenty of common ground in art and music. They decided to stage an event at the English artist Stan Peskett’s loft apartment on Canal Street, on the west side of lower Manhattan.

At around the same time, the writer and Andy Warhol associate Glenn O’Brien’s TV Party, broadcast on the city’s public-access network and co-hosted by Blondie’s Chris Stein, began to feature graffiti artists and proto-rappers from Brooklyn and the Bronx. In February 1981, the early hip hop group Funky 4+1 appeared on an episode of Saturday Night Live hosted by Debbie Harry, while Fab 5 Freddy was namechecked on Blondie’s 1980 hit “Rapture”. 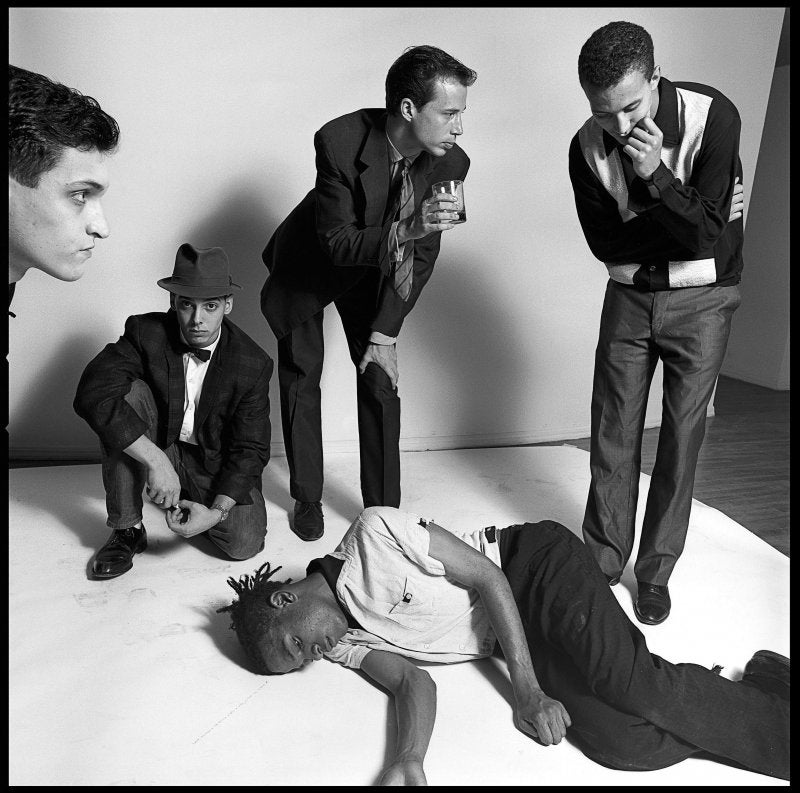 While helping the Fabulous Five prepare for the loft party in April 1979, Holman was accosted by a young kid who wanted to take part in the show. He was insistent and charming, so Holman gave him a piece of paper to work on, watching with interest as he finished his piece, then signed off with the tag “SAMO©”. The name – standing for “Same Old Shit” – had been spotted on graffiti all over the city, but nobody knew whom it actually belonged to. It was Jean-Michel Basquiat, then aged 18.

Chatting afterwards, out of the blue, Basquiat asked Holman, a sometime member of the theatrical Californian rockers the Tubes, if he fancied forming a band. In late-1970s New York, everyone, whether they were artists, film-makers or writers, wanted to be in a band. As Holman points out, “We’re all children of Warhol, who taught us that to be a polymath is not a pejorative, that it’s cool to do different things in different mediums.” Basquiat, who bonded with Astor over their shared love of John Coltrane and Charlie Parker, had tried joining the jazz-tinged avant-gardists the Lounge Lizards, only to be rejected for his lack of musical chops. That didn’t matter with Gray, the band he put together with Holman.

“Most of the smaller groups that played the Mudd Club were kind of shitty, and we felt superior to them because we didn’t try to be musicians, we didn’t try to do conventional, off-the-shelf punk music,” says Holman. Alongside the composers John Cage and Karlheinz Stockhausen, the south London tape-loop pioneers This Heat were a big influence. “A lot of what they did was sort of hippy-dippy boring shit, but some of it was brilliant.”

Assorted members of Blondie were spotted at Gray gigs (Basquiat appears as a DJ in the video for “Rapture”), and there was a story doing the rounds that David Byrne of Talking Heads was keen to collaborate. Boch saw Gray play live a few times. “They were raw, they were young and finding their way musically… And sound-wise, it was very beautiful,” he says. “It was out there: it was jazz, it was space music, it was experimental. It would catch a rhythm and then lose it, catch a beat and lose it and then find it again. They were cool beyond their teenage years. They had that swagger.”

Holman would tape a microphone to a drumhead and then pull masking tape on and off the skin to create strange sounds, while Basquiat would lay an electric guitar on the floor and play it with a metal file. A jazz lover, he tried out various horn instruments but, in the spirit of the times, it was always pretty rudimentary stuff: parping blasts and howls adding to the deconstructed musical palette. The increasingly cheap new generation of synths quickly became a favoured tool. Despite budget and space constraints, the band’s stage presence and visuals were a big part of their act.

For their final gig at the Mudd Club, Holman created a dome-like structure from scaffolding positioned over the stage. The keyboardists Wayne Clifford and Vincent Gallo (the actor-director and still occasional musician) were strapped inside at 45-degree angles. The guitarist Nick Taylor was hanging so high up that the audience could only see him from the knees down, while Holman’s drum kit sat below the stage, so people could only just see the top of his head.

And Basquiat? “Jean being kind of a princess, [he] was never one for getting his hands dirty. And he hated being told what to do. He shows up for the soundcheck, sees what we did with the stage, looks absolutely amazed by it all and then just walks out without a word. He finds this wooden crate, comes back in, throws it on to the stage, squeezes inside, pulls his synth in with him and smiles. There he was, right at the centre of the stage, right at the centre of attention.” Holman chuckles. “That’s when I realised that he would never be bested by anyone.”

That Gray line-up never released a record, but one of their songs, “Drum Mode”, appeared on the soundtrack of Edo Bertoglio’s film Downtown 81, which was set in the local scene and starred Basquiat. Ambitions were generally limited to playing in front of a few hundred scenesters. “Jean was different, though,” remembers Holman. “At the ripe young age of 18, he would say, ‘I’m going to be a famous artist.’ He had this complete confidence about who he was and what he’d have to do to achieve that.”

By 1981, Basquiat’s star was in the ascendancy. “Within a couple of years, he went from being this graffiti kid who we would catch spray-painting the bathroom walls to basically being canonised by the art world,” says Boch. Two years after forming the band, it was time to leave it. Gray have continued to exist in various incarnations over the ensuing decades and they released their debut album, Shades Of…, in 2011. There is talk of a possible gig to tie in with “Basquiat: Boom for Real”, the major exhibition just opened at the Barbican in London.

Boch reckons that it’s time the band finally enjoyed some recognition. “They were pretty remarkable,” he says. “It was a bit like when you heard Patti Smith for the first time, or the Ramones, or any of those other CBGB bands. Gray had something that we really hadn’t heard before.”

CBGB closed its doors in 2006, while the last of five “beautifully renovated boutique condominiums” at 77 White Street, the site of the Mudd Club from 1978 to 1983, was recently sold for $3.6m. Plenty of things change over four decades. Basquiat died of a heroin overdose in 1988, aged 27. Earlier this year, his untitled skull painting became the most expensive at auction of any US artist, fetching $110.5m (£85m). Astor now lives in California, while Boch is based in upstate New York and has just published his brilliantly entertaining memoir.

Holman, however, remains a Manhattanite and insists that the place has retained its maverick soul. “In spite of all the money people polluting it and all these ass­holes from the Midwest with their hipster inertia, there’s a spirit and an energy here that transcends anything they could ever do to diminish it. It’s far too powerful.” His friend and former band mate would approve.