It was not a writer or a philosophe who came up with the pithiest encapsulation of Enlightenment thinking ever coined, but an artist. The aphorism “The sleep of reason produces monsters” was inscribed by Francisco Goya on a celebrated image that shows the artist asleep at his desk while a nightmarish murmuration of lynxes, owls and bats swirls up from the darkness around him. For Goya, the creatures of the night released from his imagination represented the ills that afflicted Spain during the late 18th and early 19th centuries: a corrupt and self-serving church, a flawed monarchy, a rapacious aristocracy and a populace in thrall to superstition. The print was part of Los Caprichos (the caprices), a satirical collection of etchings published in 1799. Ten days after the volume appeared, Goya withdrew it from sale for fear of the Inquisition: reason, as he saw it, was still in a sleep so deep as to be almost comatose.

This precaution, however, did not stop him from examining further the mysteries of the subconscious. For a man dedicated to the light of reason, he was fascinated to the point of obsession with human folly and the things that lurk in the dark. His focus was sharpened by personal tragedy. All but one of his six children died as infants. And in 1793, at the age of 47, he had suffered a catastrophic illness that left him totally deaf and locked him in his own world, distancing him from human society. Like his contemporaries – and fellow oddballs – William Blake and Henry Fuseli, Goya filtered the world through his “inner eye”, and he began to record what he saw in a series of eight albums, subsequently labelled by scholars A to H. These albums were not pattern-books of poses and scenes intended as preparatory works for paintings. The pictures they contained were works of the imagination, private images that catalogued the artist’s omnivorous interest in the human animal.

After Goya’s death in 1828 the albums passed first to his son, Javier, and then to the painter’s adored but feckless grandson Mariano (who squandered the family money while awarding himself the aristocratic title Marquis of Espinar). Between them, father and son broke up the volumes, combined most of the images into joint albums and later sold them. Many of the pictures were bought by the painter Federico de Mad­razo, who went on to become the director of the Prado. He pasted his sheets on to pink paper and rebound them in the 1860s into three albums factices – albums containing a mixed selection of images meant to divert the viewer. So, within 40 or so years of Goya’s death the coherence of the compilations, and the insight they offered into his mental processes, had been lost. Now the contents of one of them, Album D, the Witches and Old Women Album, made around 1819, have been brought together for the first time in 150 years and are on show at the Courtauld Gallery in London.

For adherents of Goya this is a thrilling reconstruction and a wonderful exercise in scholarship by Juliet Wilson-Bareau and Stephanie Buck. By reuniting 22 of the original 23 images (sheet number nine is lost), inveigled from 12 different public institutions and two private collectors, the curators give us a glimpse into Goya’s mind. The minutiae of stylistic and technical analysis, of posthumous history, numbering and dating (for committed students, the new consensus for the chronology of the albums runs ABCFEDGH) are mightily impressive. But ultimately the niceties of scholarship, however absorbing, are secondary. What makes this exhibition so exciting is that Goya was one of art’s very greatest exponents, a man who mixed a unique and often unfathomable personal vision with breathtaking technical facility. The Album D pictures – and a selection of related images from various albums – may be small in scale but they represent art at its very highest pitch. 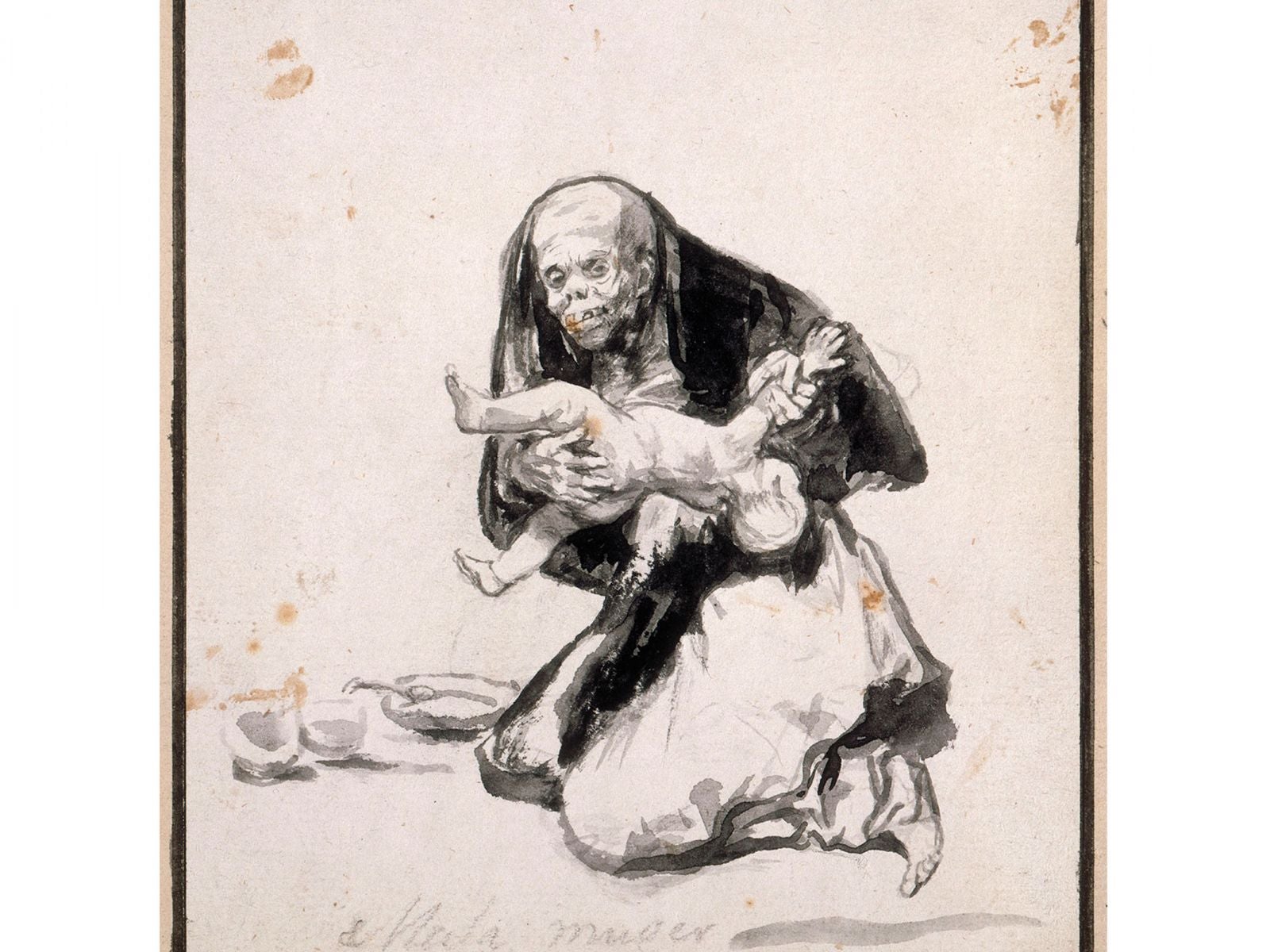 The pictures are executed solely in brush and grey ink, and show not just witches and old women but also the occasional old man – all topics that crop up in the other albums, too. Some figures float in the air, the off-white of the paper representing the void; some are sinister; some are comic; some show the indignities of old age; some teeter on the edge of horror. Goya gave each one a title, written at the bottom in black chalk – Nightmare, Covetous Old Hag, Dream of a Good Witch – that describes what is going on but does not explain it. They are scenes that defy rational explanation and one doubts whether even Goya knew exactly what they represented.

But every single sheet is profoundly unnerving. In some it is obvious why: a witch carrying a bundle of babies tied to a stick as an offering to the Grand Witch Master, for example, or Wicked Woman, showing a skull-like creature about to eat a naked child (although witch trials had largely died out by Goya’s time, he was familiar with cases from the 17th century as published in later accounts). Others disquieten more insidiously: an old man wakes from sleep kicking and screaming (what nightmare is he fleeing?); another lies snoring, his toothy mouth agape as if ready to bite. Seemingly innocent old women praying or talking to a cat look on a second glance like procuresses or occult figures.

For Goya in these works, there is no distinction between the supernatural and the human worlds and evil is within as well as without. These are studies of the uncomfortable side of humanity – its vanities, illusions and desires – and, as such, are universal. That the artist rarely suggests a setting and that the figures are surrounded by an empty expanse of paper only enhances the essential isolation of the human condition.

The album starts with a series of flying figures; they are a subversion of the angels and putti of religious art and, in particular, those painted by the Tiepolos in Madrid in the 1760s. In Goya’s images divine order and the divine realm have been replaced by their opposites. Here old men and women float in space and are driven upwards or downwards by their emotions. A positive mood acts like hot air beneath a balloon (Mirth and They Ascend Joyfully) and the figures rise; malignity or discord makes them fall (They Descend Quarrelling). In another, Dream of Flogging, which shows a corpse-like man being borne aloft and spanked by three witches, the propulsion seems to come from sexual desire (this picture, appropriately, sits between groups of images showing scenes of flying and nightmares).

Even those sheets depicting the mundane follies of old age carry a frisson. An elderly woman telling her rosary as she dreams hopelessly of marriage and another praying devoutly are interspersed with sinister images – a pair scuffling (Old Women Fight Too), or hoarding bags of gold. As a result, similarly, they are open to darker readings. As the drawings play out, what they suggest is the neural flicker in Goya’s brain as one scene gave rise to the next, though the pathways linking them have disappeared. 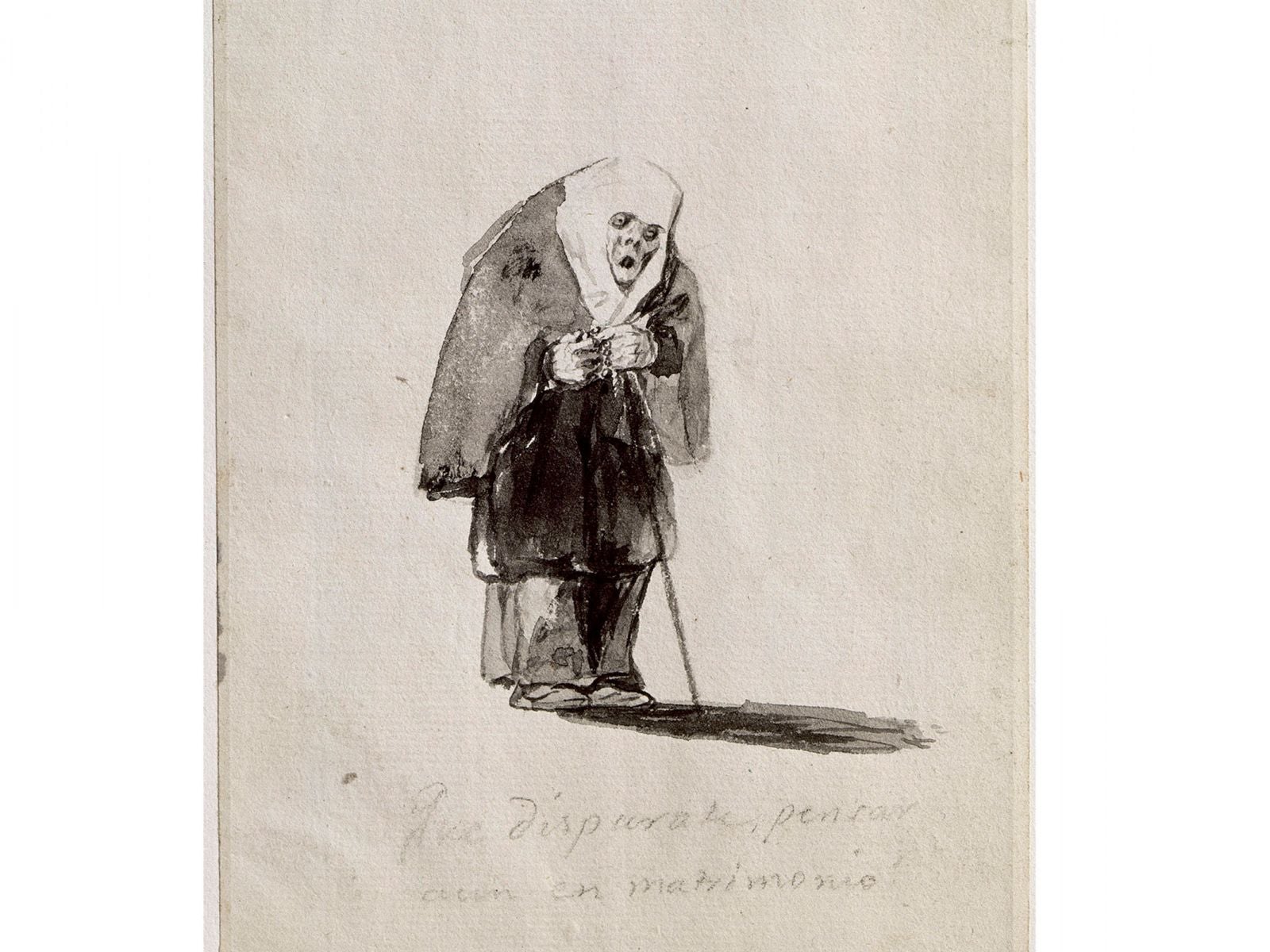 What Folly Still to Be Thinking of Marriage

If the meanings of the pictures will for ever be equivocal, what is indisputable is their technical brilliance. Using brushes of varying fineness and a dark wash ranging in tone from black to pale grey, Goya invented figures (these are not drawn from models but rather recomposed from recollections of people he had seen in the street) in a huge variety of often complicated poses. A flick of the wrist is enough to conjure up a cloak; a flurry of lines brings out hands and feet; a dab of black an open mouth; two tiny dots eyes wide in horror. The facility of the brushwork is enough in itself to lift them away from caricature. But the spontaneity and rapidity are deceptive; the sheets also show evidence of figures being scraped out and limbs repositioned for better effect. As such, the pictures are not a visual equivalent of automatic writing – a record of the unmediated unconscious: these are proper compositions. Whatever it was that Goya was trying to say, he took great care in saying it.

These are also pictures that are literally and figuratively magical: there is the dark stuff of the witches’ world and the altogether more benign type (magic as miracle) in the skill that enabled Goya to give visual form to his haunted imaginings.

This exhilarating exhibition is part one of Goya’s double presence in London this year; in October a major display of his portraits will open at the National Gallery. It will make a perfect contrast: a chance to see the artist’s public face after this, his private one. One wonders if his sitters – from his rumoured lover the Duchess of Alba and the Duke of Wellington to Charles IV and the prime minister Manuel Godoy – had any inkling, as he eyed their features and translated them on to the canvas, of the strange and unsettling visions that were bubbling away in the painter’s mind.

Until 25 May. More details: courtauld.ac.uk