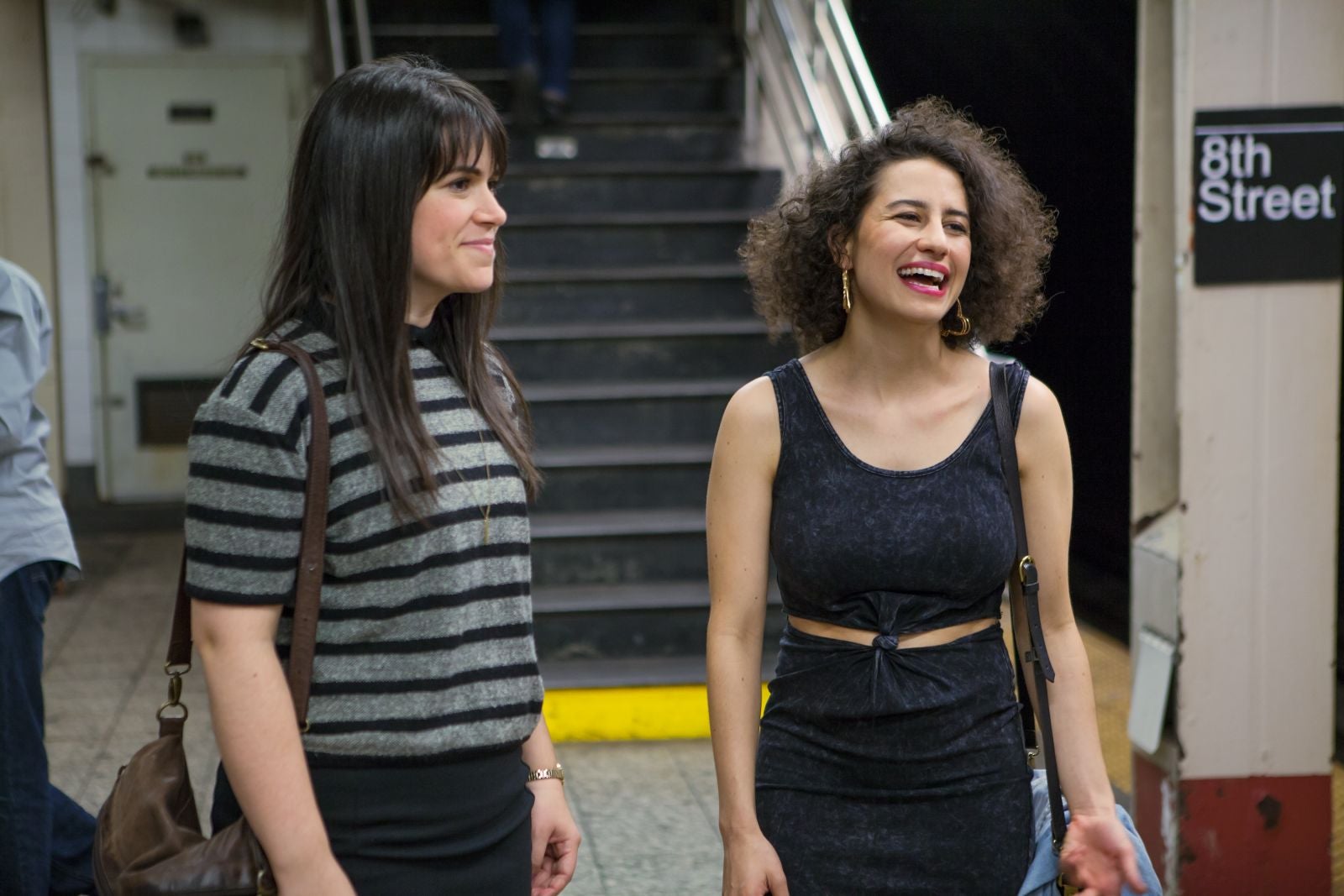 The semi-real New York of Broad City has attained almost mythic status and the opening of “In Heat”, the first episode of the show’s second season, finds us at the city’s heart. Abbi Abrams (Abbi Jacobson) and Ilana Wexler (Ilana Glazer), late once again, are running to the subway at Bleecker Street. Ilana suggests they head to the back of the train, so as to be by the station exit at their destination. What follows is a surreal journey through the circles of New York hell: as the girls progress along the cars they find each filled with a different obstacle, from backpackers to a carriage containing what seems to be human excrement (along with a woman eating, apparently oblivious to the smell). As they exit the train – leaving a carriage filled with Hasidic men, one of whom Ilana slaps on the ass as she leaves – Abbi looks out beyond the camera and says, “we were supposed to be at the front end”.

It’s an exemplary scene from a series that has garnered praise for its realism (New York can be hideous) and surrealism (the subway car of Jews) both. Glazer and Jacobson initiated Broad City while performing together at Upright Citizens Brigade, the illustrous improv group whose other members have included Tina Fey, Amy Poehler and Reggie Watts. The programme began as a set of YouTube shorts while both women were still paying the rent with tedious SEO jobs, and the series of identities they used to market their creation are as good as any descriptor: it’s about two women, about New York, about Jews, about stoners, about broke people. When they began pitching the show to television networks, they reached out and asked Poehler to be involved. Now executive producer of Broad City, she helped procure a spot on Comedy Central, home of The Daily Show with Jon Stewart and other US comedy juggernauts.

From there the series has grown exponentially. By February last year it was averaging 1.2 million viewers per episode, and its first season was one of Comedy Central’s highest-rated among younger demographics. Media coverage has been overwhelmingly positive, be it the New Yorker’s extended piece in June 2014 or Phillip Maciak’s “Theses on the Dance Moves of Ilana Glazer”, which compared Broad City’s constantly-moving protagonist to Walter Benjamin’s angel of history.

It has also, predictably, been the subject of innumerable think pieces asking what the series might mean for women in comedy. The program is undoubtedly progressive: Broad City may borrow from earlier (male) stoner comedy duos, but neither woman is reduced to a stock type. Abbi, for instance, is by far the more sensible of the pair but not just – no pun intended – Ilana’s straight girl, as her occasional adrenaline rages remind us.

This second season will likely inspire more criticism. The brand of feminism practised by Broad City’s protagonists is sometimes troubling if always heartfelt, and the humour of season 2 is increasingly unflinching. At one point in the opening episode, Ilana jokes that Abbi is a “reverse rapist” – a play on the much-mocked term “reverse racist” – after the latter unwittingly has sex with an unconscious man, praising her friend for “raping rape culture”; lines that will likely herald yet another round of articles analysing the ways women comics joke about rape. Similarly, comments from the first season about “craving pink dick” and Abbi telling Ilana that sometimes she’s “so anti-racist I think you’re actually super racist” are pushed further here, with a plotline in which Ilana hires unpaid interns including references to black slavery that will leave many a viewer’s hand over their mouth.

In a way, however, it is the most questionable moments of Broad City which get closest to its heart. While Girls – a frequent point of comparison – is known for its characters’ awkwardness, the cast of Broad City are framed as likeable even, or perhaps especially, when their behaviour is questionable. The shame which is one of the central emotions of Girls is almost entirely missing here. Broad City’s surrealism lets its creators play disgust for laughs while also revelling in its truth. At one moment, the girls accidentally get a sixteen-year-old high school student stoned; another scene shows Abbi using a blow-dryer on her genitals before the aforementioned heat wave sex. At no point, however, does our revulsion transmute into dislike for the protagonists – and rarely do they suffer consequences.

This is the central contradiction at the heart of the show. Unlike Dunham’s wonderfully unlikable Hannah Hovarth, Broad City demands we find its women charming while they do terrible things. When Hannah quotes Missy Elliot during her break up with Donald Glover’s character Sandy, he is rightly horrified. By way of contrast, the intern Ilana pictures singing slave spirituals still seems happy enough at the end of the skit. The difference is partly one of absurdity, but also one of politics. Drugs, sex, and troubling attitudes to race and gender are part of the texture of city life, and Broad City suggests to sanitise would be remiss. It’s a winning feature for the show’s young demographic, and the programme has already been renewed for a third season. Hovarth, we suspect, will eventually grow up and move away from the version of her life Girls depicts. If the character of Ilana’s mother introduced this season is anything to go by, the women of Broad City won’t be changing any time soon.