Warning: spoilers of series one and two of “Orange is the New Black”

Welcome back, Orange is the New Black (or Orange is Not the Only Black if you get your lesbians confused), the Netflix drama set in Litchfield, an American women’s correctional facility. I almost loved the first series, so went into series two with hopes that this time it would have the courage of its convictions. BOOM. First pun down.

I almost loved it because it does some things I like. I like things with lots of women in; it means that one doesn’t have to do the work of many. A great mix of women too, so if you don’t like one, another will be along in a minute. And women as complicated as we are in real life. Complexity means you fall in and out with them as often as they fall in and out with each other – it adds momentum. I’ve been consistent with lead character Piper Chapman though, always thinking she was toxically entitled. In conversation with on-off girlfriend Alex she told us as much herself: “I’m an emotionally-manipulative narcissist”. No shit. The script does a lot of that overt signposting. I lost count in series one of the times they say “nothing is normal here” and “nobody WANTS to be here”. “Piper, this is changing you,” said her Adam Sandler-lite boyfriend on the phone. “It’s changing me.” Wow, I thought. Yeah. Prison will do that to a person.

You can tell I’m not properly in love because I only watched the first three episodes of series two. (Actually, it’s because I think doing them quickly is not in any TV series’ favour.) It opens with menace. Piper is taken to another, harder prison and we are dangled briefly in front of a whole new set of characters playing out vignettes, some brash, some not – Piper’s nonchalance at giving up her four-day-worn pants as payment for a message being delivered signifies how far she’s fallen. I don’t want to invest in new people, I sulked. I want the old ones back. But it’s not long before we’re “home” in Litchfield without Piper and though she was the main series plot motor, we’re embedded enough to cope.

Another thing I like: loads of little storylines; from day-to-day incidents to unfolding situations and relationships, like juicy womany parcels. (I think all the lesbian sex has gone to my head.) When they resist going for the flippant – they’re not great on subtle comic tone – they do the smaller stories very successfully; the looks, the tiny tensions, slow unravelling. Daya trying to do a shit, Suzanne’s obsession with clocks, Red, the “kitchen commie cunt” doing her hair. (The word “cunt” is often slightly fluffed. Con’. They’re saying it but with a sense of “oh god here I go with the c-word”. A disconnect, a signifier of other disconnects.) 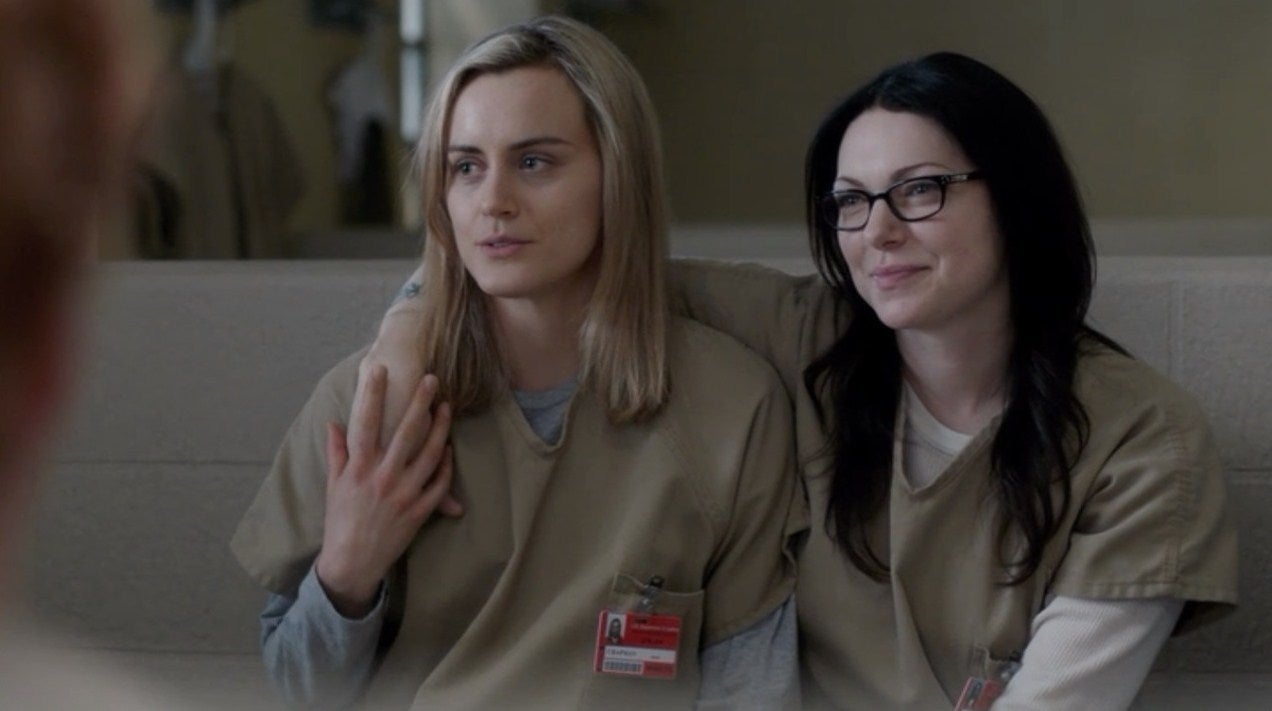 It’s not long though before there’s a naff contrived storyline on a par with the dreadful nativity of series two, which felt like Richard Curtis-does-bird. This time their ensemble piece is a job fair. Dressing up and doing mock interviews for the “outside world”. I suppose it was a good way to remind us who everyone is but beyond that, it didn’t feel authentic. Balancing comedy with drama takes more subtlety than they afforded it. They can do funny, like when Piper returns and a prisoner gasps “Oh shit. She is risen”. But these leaps into almost-panto with the Big Acting make for a very uneven tone.

They’re also really pumping out the backstories; go back to the child and we shall understand the woman. So far we have poor old Piper who saw her dad kissing another woman and doesn’t get listened to (sob), Tasha being taken in by a drugs matriarch, and Suzanne being a displaced adoptee. It felt like trying to give a room ambient lighting by flicking on a fluorescent bulb. For a programme that says “don’t judge, see beyond the stereotypes”, the backstories are full of stereotypes.

This swinging from back-story pathos to comedy to drama is very clunkily done. (Check out the musical stings between scenes – sometimes they’re almost unbelievably waaah waah waaaaaaaaaah.) But of course, this whole thing is predicated on disconnect, a white middle class woman out of her “place”. That could be me, that time I carried heroin! Disconnect is embedded in unsubtle writing (“This place stinks”. “I’ll open the windows”. “That’s not what I meant”) and things that probably sounded better written down. (“I believe in Christopher Hitchens though I do admit he could be kind of an asshole.”) It’s in their fabulous eyebrows, as arch and overdrawn as some of the performances. It’s in the fact that this prison is sanitised and underpopulated. I’m not watching to learn prison facts; I’ve got Louis Theroux for that. But this reminds us constantly it’s a TV version of prison. Disconnect.

To fully get into something you have to care. To believe. “Don’t stop believing” they would sing if this was Glee prison, and at times it’s uncomfortably close to that. But hang on. I loved the first three series of Glee. And despite all the disconnect, I have started to care, just enough. About Tasha, and Daya, and Red. For their characters, their complexity, their imperfections and small stories. Caring about the characters will pull me through the difficult times. JUST LIKE IT DOES IN PRISON, yeah? Just like. Connect.