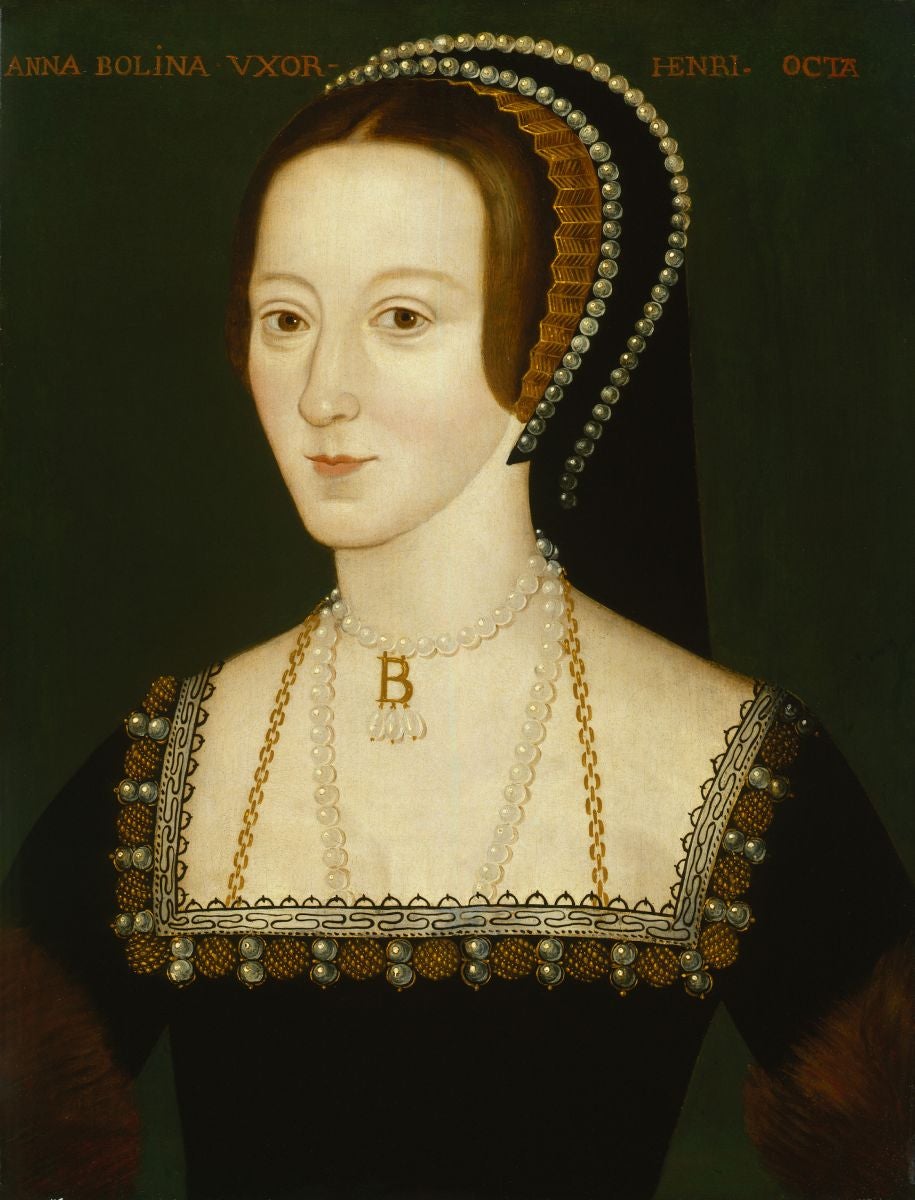 A 16th century portrait of Anne Boleyn by an unknown artist, now in
the National Portrait Gallery. Image: Wikimedia Commons

Anne Boleyn fans get twitchy every May. From the start of the month, the countdown begins, tracing her unexpected arrest, the gathering of witness statements, the trials with their foregone conclusions, to her dramatic execution by French swordsman on May 19. Every year, roses are still lain on her memorial slab in the Chapel of St Peter ad Vincula in the Tower of London. Emotions run high.

Anne’s death was, and still is, shocking. The first English queen to be executed, she set a precedent which Henry followed six years later by sending her young cousin Catherine, his fifth wife, to her death on the block. There is a touching story of the teenager requesting the block be sent to her in prison the night before, so she could practise lying her head on it. Yet Catherine, for all her youth and inexperience, still garners less sympathy than Anne, whose sudden fall from grace is seemingly inexplicable, considering the lengths Henry went to in order to make her his wife. Described by some as a murderer, a serial killer and a psychopath, Henry had ensured his marriage to Anne was declared invalid five days before her death, yet the French swordsman was already on the way from Calais. So why did Anne have to die?

Anne caught Henry’s eye some time in late 1525 or early 1526. By this time, the king had been married to the Spanish Catherine of Aragon for over fifteen years and, after six pregnancies, only a single child had survived, and that was a daughter: Mary. Henry had fathered one illegitimate son and bedded Anne’s married sister before the sophisticated beauty arrived at the English court. Educated in the Netherlands and France, the dark-eyed Anne was intelligent and stylish, in contrast to the much older Catherine, then past her fortieth birthday. In anticipation of more children, Henry instigated the divorce proceedings that would result in his breach with the Roman Catholic church, the displacement of an anointed Queen and his own excommunication.

All this for Anne. As if to make his point, Henry probably married her twice, first at the end of 1532, and again the following January. She quickly fell pregnant but the child she bore in September 1533 was not the longed-for son, but a daughter, Elizabeth. She had at least one other miscarriage in the following years, before falling pregnant again in the autumn of 1535. In spite of the efforts of various historians to claim they were virtually doomed from the start, Henry and Anne’s marriage still seemed strong as they celebrated the arrival of 1536. Then, in January, Henry suffered a fall while riding and, shortly after, Anne miscarried a male child. The King was diverted by Jane Seymour, but none of this guaranteed Anne’s fall and as late as April, the royal pair were planning a joint trip to Calais. They appeared to quarrel at the end of the month, with one observer noting the Queen holding her daughter, apparently begging with Henry through an open window. Then, on 2 May, Anne was arrested and taken to the Tower. The swordsman may have been summoned as early as a week later, given that he had to cross the Channel, making it clear that her death was planned. On May 14, the marriage was declared null and void, but the following day, Anne was charged with treason, adultery and incest. It was a foregone conclusion. She met her death within four days.

So why did Anne have to die? No other English Queen had been treated in this way. When Catherine had stubbornly opposed divorce, she was sent away from court and Henry went ahead and remarried anyway. Even anointed Queens could be accommodated, no matter how bitterly they complained. Other options were available, such as retirement into a monastery, or Anne could have lived out the rest of her natural life in the courts of Europe. Adultery and incest were not verdicts that carried the death sentence. In any case, the charge of “incontinent living” has been disproved by the research of Alison Weir as, on the majority of dates, Anne or her supposed lovers, were elsewhere. If Henry believed Anne guilty, this gave him the perfect excuse to dismiss her and few would have blamed him. If she was at the heart of a political coup, masterminded by Thomas Cromwell, or the Seymours, or too vocal an advocate of religious reform, the execution was still an unprecedented step. Someone wanted her out of the way, but not just out of sight. There had to be no comeback. It seems that there was one main reason that Anne had to die and that was that Henry himself wanted her to.

Servants to the crown came and went. Even exceptionally able men like Wolsey, More and Cromwell owed their survival to the favour of the King. Once that had been withdrawn, their lives were forfeit and the same was true of Anne. Henry had raised her to her position, as the apocryphal story goes, and he could cast her down again. She had transgressed boundaries of class, birth, culture and gender, making a heady and dangerous rise in which she was secure so long as she had the king at her side. The change came quickly. At some point in early May 1536, Henry made the decision to abandon her and the promoted mistress became a social upstart, a whore and witch, an incestuous adulteress and a traitor. She had to be defined as the inverse of what he had made her. Henry had placed her on a precipice and then stood back. This was personal.

Despite the best efforts of G W Bernard to suggest Anne probably committed adultery, most modern historians are of the belief that she was guilty of little more than indiscretion. She exploited the flirtatious traditions of courtly love to make suggestive remarks to at least one male companion, Sir Henry Norris, insinuating that he was in love with her and hoped to marry her if she was widowed. Imagining, or “encompassing” the king’s death was, in fact, treasonous at the time. It was poorly judged but, if Anne had retained Henry’s support, it would probably never have come to light, or she could have explained it away as a misguided convention. Most damning in terms of the adultery charge were the comments made by her lady-in-waiting, Lady Worcester, who cast aspersions on the queen when her own immorality was exposed. Technically, a queen’s adultery was also considered treason, as it threatened the line of succession. However, various slanders had been levelled against Anne before but with Henry’s support she could ride them out. A decisive tipping point had been reached that May. Either Henry chose to believe the new rumours or he used them for his own purposes: either way, he wanted her dead.

Various explanations have been put forward for Henry’s brutality. It has been suggested that he was despotic from the start, and this exaggerated with age, or that he suffered from the genetic disorder McLeod’s disease, which can trigger irrational behaviour. Equally, his fall from his horse that January might have taken his character in a new, darker direction. He was an absolute monarch, in the mould of his forebears and his disapproval was death, literally, for Anne. There is no doubt that Henry wanted her dead. Otherwise she wouldn’t have died. But what lay at the heart of this was his sense of autocracy. Anne Boleyn had been his project, from the moment he had spotted her at court and desired her, to the titles and gifts he had heaped upon her, the rules and hearts he had broken, to her magnificent coronation. She may have exploited his desire for her but ultimately, any power she held over him had been by his permission. It had been an elaborate game of love, according to courtly conventions and Henry had tired of it. The notion that Anne wielded any sort of real control in the relationship was an illusion that he had granted her out of genuine affection. At court, he had been her defender, her loyal knight and protector. His repudiation of her in 1536 was based in his belief of her ingratitude and a personal desire for revenge.

Henry was ruthless in his personal relationships. His treatment of Catherine of Aragon and Catherine Howard, just as with Wolsey, More and Cromwell, shows a similar behavioural pattern. Once-beloved favourites were rejected suddenly, almost overnight, being sent away from court with little warning, never to be seen again. Once he had made up his mind, he never went back. He could no longer tolerate their existence and had a need to close the door upon them. As a king, he could close the ultimate door, without any judicial reprisals. The greater the love he had felt for them, the greater the suffering he needed to inflict upon them. Without resorting to modern psychology to diagnose a sixteenth-century king, it appears that Henry had a need to punish Anne, to exact a complete revenge on her that owed less to her reputed crimes than to his own monocracy. Thus, as he had dictated the path of her rise, he had to end it decisively. He had controlled and shaped her as a mistress and queen; she was his subject, his plaything, and he could not resist imposing the ultimate authority.

Cromwell prepared the case against the Queen but the questions of treason, politics and religion held little sway against the personal. Henry may have genuinely loved Anne but in May 1536, he had tired of the game and withdrew the illusion of power he had permitted her. If she had not already realised how just how far he had been in control the whole time, she was left in little doubt as she knelt on the block that May morning.