In Rebel Without A Cause, from 1955, a 24-year old James Dean, red-jacketed and tight-jeaned, climbs behind the wheel of an old black Mercury. To his right, the opponent he will race to the edge of a cliff hangs out of his driver-side window for a last slug of bravado: “Hey Toreador!”, he jeers. “First man who jumps is a chicken.” Re-inserting a trademark cigarette, Dean flicks on his headlights and hits the gas, and the two cars accelerate towards the brink. Frames from the edge, Dean glances right, grabs for the door and rolls out onto the turf. His adversary, jacket sleeve caught on his door handle and jammed into his driver’s seat, slips wrenchingly over the edge with his car.

Less than a year later, the real life James Dean, whose legacy is the subject of an upcoming retrospective at the BFI, was to die in an echoing event, flipping a race-car on a bend on a California highway. A life mesmerisingly truncated, he left behind only three films, and the gaping absence of the career that might have been. It was a sequence of events morbidly inkeeping with the themes of doomed youth his characters embodied.

The word “iconic” is tossed around ad nauseum, but if ever it were to apply, in the sense of an individual and a star whose off-screen persona outshines the sum of their roles, who bends the fabric of the society in which they live, Dean would surely qualify. In life, and even more so in death, the bee-stung darling of early Technicolor has held the awe of the movie-going public.

But facial anatomy and excellent hair were not the traits for which Dean was influential. Hollywood does not suffer a shortage of cheekbones. He slotted into a blurry interlude following the second world war but before the flowering of the Beat movement, in which the role of a man in society was under sudden and unsuspected dispute. A generation primed for combat found itself at a loss of purpose, and gender roles that were without meaning overnight began to merge and reconfigure themselves. 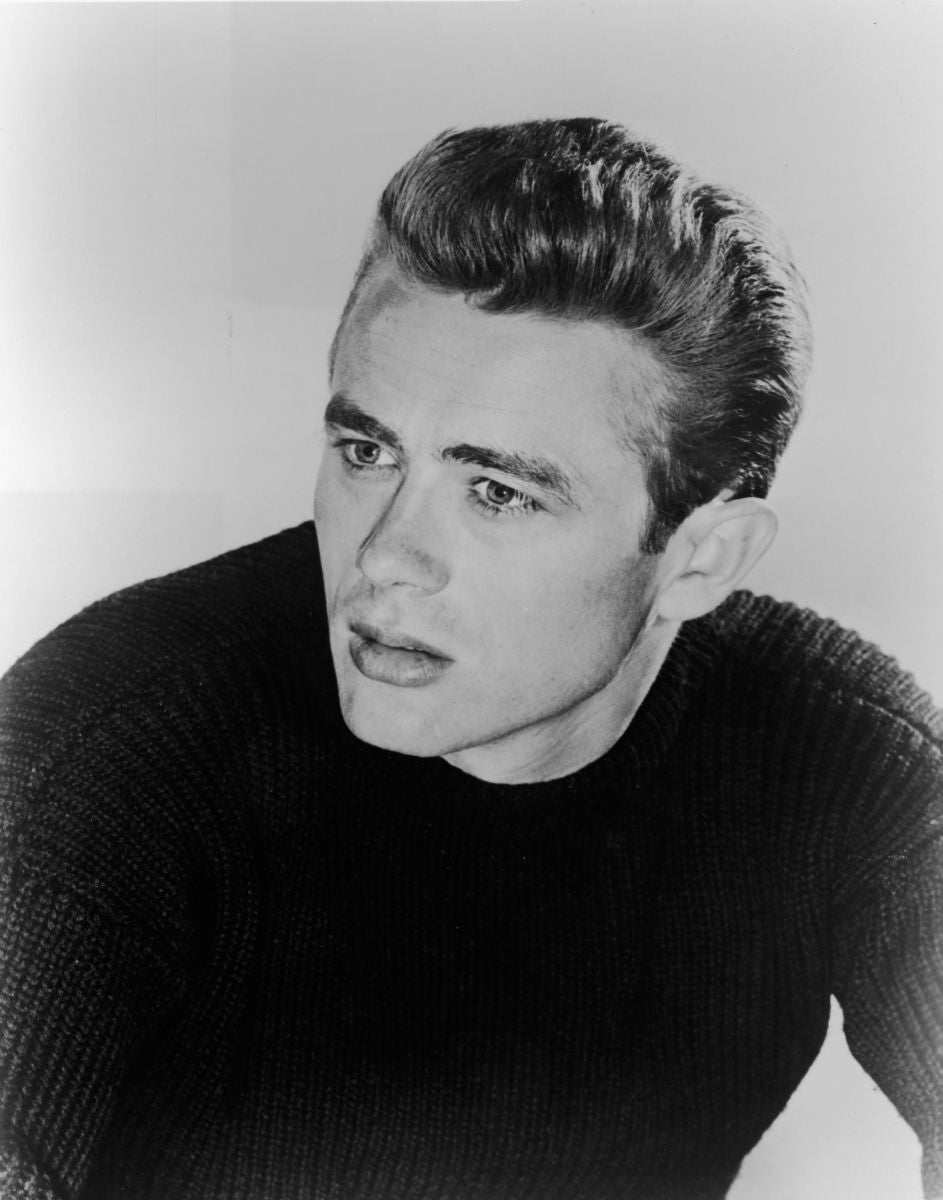 A portrait of Dean from the early 1950s.
Photo: Hulton Archive/Getty Images

Dean was a new kind of man. His characters cried and struggled and screamed in frustration at the blurry world they had to live in. They were awkward and uncertain, grappling with sexuality and the disappointment in older men around them. “What can you do when you have to be a man?”, screams Jim, the tortured hero of Rebel Without A Cause, at his impotent father.

The cut of the male star was formerly more robust: Charlton Heston, Humphrey Bogart, Clark Gable – these were men’s men, manoeuvring from the Alexandrian chariot to the Western Front with a raised eyebrow in place. But the type of machismo with which Hollywood used to cash cheques, which slipped so easily into the rhythm of day-saving and woman-placating, is now all but redundant. George Clooney is perhaps the only contemporary relic of that 1940s flavour of heterosexuality. With a Cary Grant jawline and non-threatening cool, Clooney lingers as a housewives’ favourite, occasionally modernising his brand with political activism and dips into independent pictures. He banks on a nostalgia for the screen heroes that preceded him.

But the successors to James Dean are in evidence everywhere. From the contemplative Ryan Gosling to the part-time poet James Franco, the Emotional Man is now a marketable asset. Matthew McConaughey, 2014’s case in point, has lived an entire spectrum of masculinity, latterly dropping frat-boy kilos to become a thoughtful shadow of himself – a feminised brand that has been remunerated well beyond his Oscar.

In Hollywood today, a “male icon” is a contradiction in terms. Where fame has become all but genderless, a new batch of androgynous stars has fumbled its way to the surface. From Michael Cera to Jesse Eisenberg, the cinema is synonymous with a group of loping, hobbit-haired boys so divorced from masculinity that their characters actively mock the idea of sexual power. A swelling interest in superheroes, as an object of ironic admiration by the tech generation, is not coincidental, as fanboys reflect on a lost type of man, so distant from themselves.

James Dean opened a door for the re-imagining of the male star. An awkward icon, he gave early shape to a model that would take decades to take hold. A man not just uncomfortable in himself but in the very idea of what a man represents, alongside Elvis Presley and Johnny Cash he broke a cycle of sexual dogma, laying the tracks for a half-century of flexible, sensitive masculinity. From the Beatles to The Graduate, The Smiths to Superbad, another type of man entirely was to dominate a soft, new horizon.