My grandpa was on the outskirts of Hiro­shima when the bomb fell on 6 August 1945. He walked through the city as it burned and fled by boat, having witnessed scenes of destruction and death that are hardly imaginable to me. But when the war ended, he loved the music of Bing Crosby and took his family to church for Christmas, not for religious reasons but for the romance of all things western.

Imperial Japan had fallen, replaced by a capitalist dream seemingly magicked into reality by American New Dealers. High schools were set up on the US model; industry shifted towards technology. As the money started to flow in, some, including the film-maker Yasujiro Ozu, mourned the passing of a more traditional culture. In Tokyo Story (1953), the aspirational bustle of young Japanese is shown to be a betrayal of older values. Similarly, Shusaku Endo’s novel When I Whistle (1974) tells the story of a war veteran’s emotional estrangement from his son, a doctor, who puts success in his career above family: the dereliction of a duty sacred to the national imagination.

To be Japanese today is to negotiate the conflicting dreams of east and west. Old-fashioned reserve and collectivism jostle with assertiveness and individualism. Visit Tokyo as a foreigner and much of it feels unreal: the sheet glass, air-conditioning and underground shopping districts alongside the Shinto shrines, street-food vendors and coin-bearing good luck cats. Perhaps it seems unreal to the Japanese, too. The country has worked hard to modernise – and to “modernise” has often meant to “westernise”. The homeland has become a strange place.

It’s not surprising, then, that alienation is a persistent theme in much of the country’s fiction. Shuichi Yoshida’s debut novel, Parade (2002), newly translated into English, is a curious entry into the canon of Japanese anomie literature. Unlike, say, Taichi Yamada’s In Search of a Distant Voice (1986), which follows an immigration officer’s attempts to track down a woman with whom he may have a telepathic link, Parade shows us a world where disconnection has become a paralysing norm. The characters here are not interested in interpersonal bonds, tele­pathic or otherwise.

The five twentysomething protagonists – flatmates “playing at being friends”, as the male prostitute Satoru describes them – make vague attempts at intimacy but are happy to float along, cut off from the mess of meaningful relationships. Ryosuke is a university student pursuing a mentor’s girlfriend. Kotomi is involved with an actor who occasionally calls her up for hotel dates. Mirai is a hardened drinker; she haunts the Tokyo gay scene, where she encounters Satoru and takes him under her wing. Finally, there is Naoki, the professional of the group, who doles out elder-brotherly advice when he isn’t out jogging or at his office.

The novel’s set-up evokes a sitcom – there is constant banter between the flatmates and their stories are woven together – but Koto captures the dynamic when she cheerily compares their home to an “online chat room”, whose users are “free to come in or out at any time”. To these shallow lives, Yoshida slowly introduces the threat of violence. Ryosuke begins to suspect that a neighbour is running a brothel; police officers knock on the door, warning of a prowler who has been assaulting women in the area.

Mirai first suspects Satoru but the perpetrator could be any of them, or none. Parade’s chilling denouement is all the more disturbing because the first 200 or so pages are committed to exploring the trivialities of city life – choosing which movie to rent, which takeaway meal to get for dinner. Imagine if Friends had ended with the revelation that Chandler was a psychopath – and that Joey, Monica, Ross, Phoebe and Rachel weren’t bothered by it. Yoshida locates horror less in violence than in the kind of atomisation that would permit it. 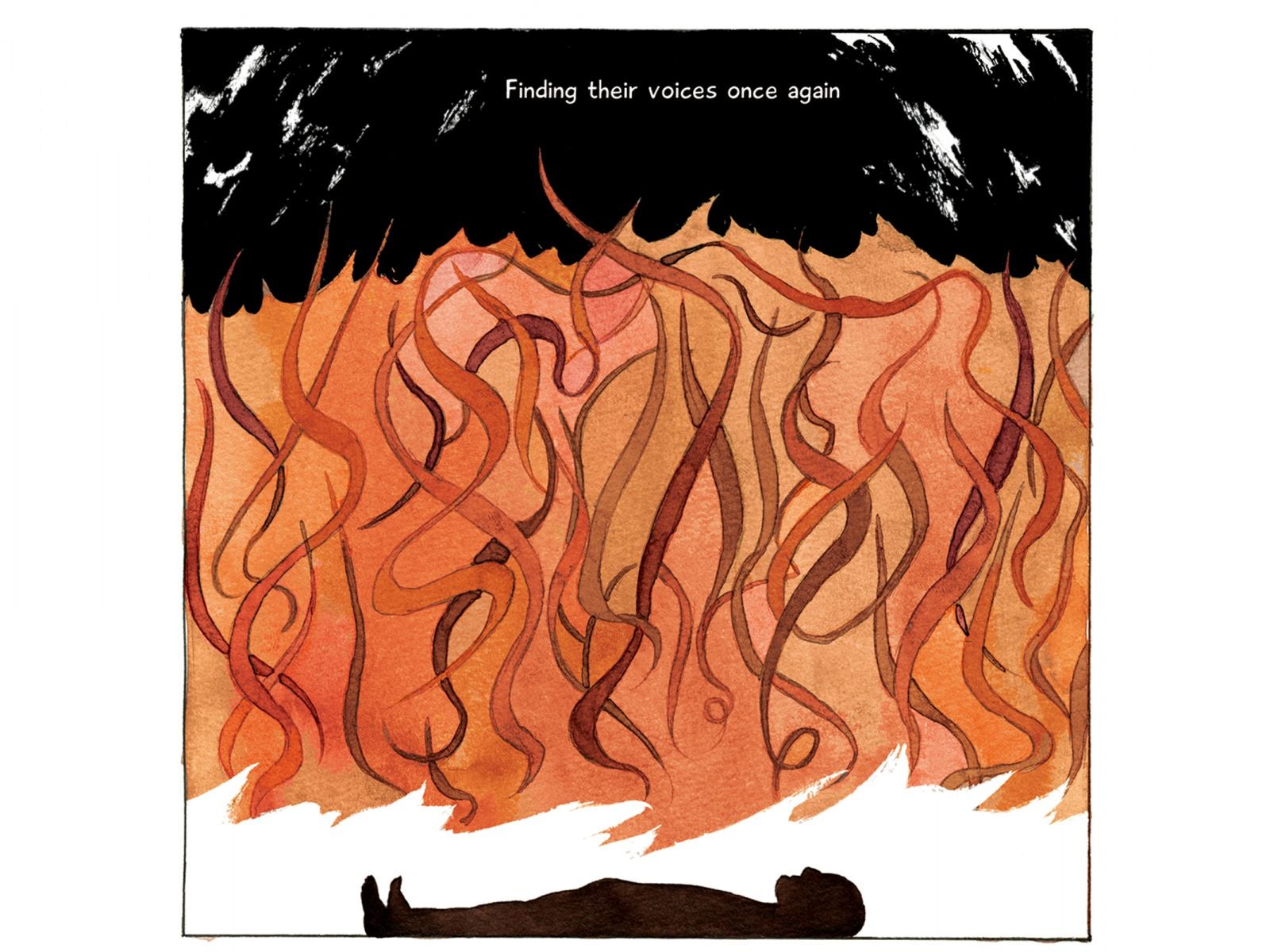 Out of the ashes: a funeral scene in “Just So Happens”

Fumio Obata’s graphic novel Just So Happens also addresses the impediments to real connection in modern Japan. Like me, Yumiko is a first-generation immigrant living in London. After over a decade here, she feels anglicised and increasingly cut off from the cultural rituals of her birthplace. When her father dies in a hiking accident, she flies home to attend his funeral.

Though rich in detail, Obata’s crisp drawing invites the reader to skip from panel to panel. It works best when it’s at its most documentary: a fireworks festival is captured in all its noisy wonder, as is Yumiko’s escape to a Shinto shrine where she witnesses a rehearsal by Noh actors. Noh becomes a motif for “codifying human forms” – a formalising of human feeling which, though “exquisite”, is ultimately restrictive. “I don’t want to be a part of your stupid play any longer,” says Yumiko to a masked actor in a dream, having decided that her life doesn’t fit into the conservatism of old Japan.

Maybe the Japanese – even those at home – will relate to Obata’s expat and her struggle to find an authentic world-view. Tradition will always be there but, for generations, the tug of a more western lifestyle has been equally compelling. Together, the books seem to suggest that we should pick a side or find a compromise between the two. Let one cancel out the other and Yoshida’s dystopia will surely follow.