St Apollonia was a 3rd century Egyptian who had all her teeth knocked out. She was burned alive for refusing to sacrifice to the gods of Rome and is the patron saint of dentists and those with toothache. The saint for Biblical scholarship is St Jerome, who lived as a hermit in the Syrian desert, striking his chest with a rock. St Catherine was a bookish child from Alexandria, who held her own against fifty pagan scholars sent to debate with her by Emperor Maximus in 305. Enraged, Maximus ordered that the scholars be burned alive and Catherine torn apart on a spiked wheel. When she touched the instrument of her destruction, the wheel exploded and splinters flew into the assembled mob. She was immediately beheaded and her body was carried to Mount Sinai by angels. St Catherine is among the many saints who have sprung to life at the National Gallery’s new exhibition Saints Alive: a junk shop assortment of limbs, cogs and torture devices devised by “Young British Artist” Michael Landy. 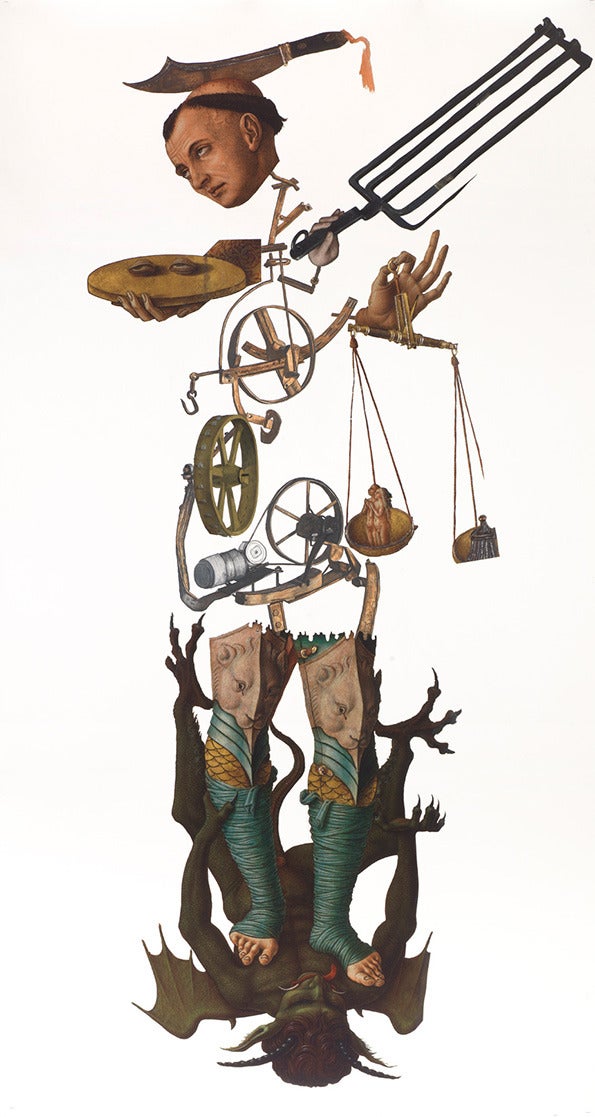 To many these stories are obscure. Landy himself was unfamiliar with most of them when he became the eighth Roostein Hopkins Associate Artist at the National back in 2009. He walked around the galleries daydreaming, writing again and again in his notebook: St Catherine’s wheel, St Catherine’s wheel.

Landy is best known for his 2001 performance Break Down, in which he gathered all of his possessions in an empty branch of C&A on Oxford Street. He catalogued the 7,227 items (everything from his birth certificate, clothes and furniture, to former art works and his car), then systematically destroyed them all. Upon entry to the exhibition, St Appollonia towers above the crowd like a paper mache float. She rocks back and forth and grabs loudly at her mouth with a pair of pliers. It’s fun, if a little gimmicky. Around the room are hung huge collages, sketches and plans. Sections of saints’ bodies have been abstracted from Italian Renaissance masterpieces (“It’s the closest I’ll get to cutting up the collection,” Landy says) and spring from the floor like pious jacks in the box. In the corner St Francis levitates in beggarly humility, asking for donations. When you put a coin in the slot, he bangs his forehead with a crucifix. They should put one outside Maria Miller’s office. 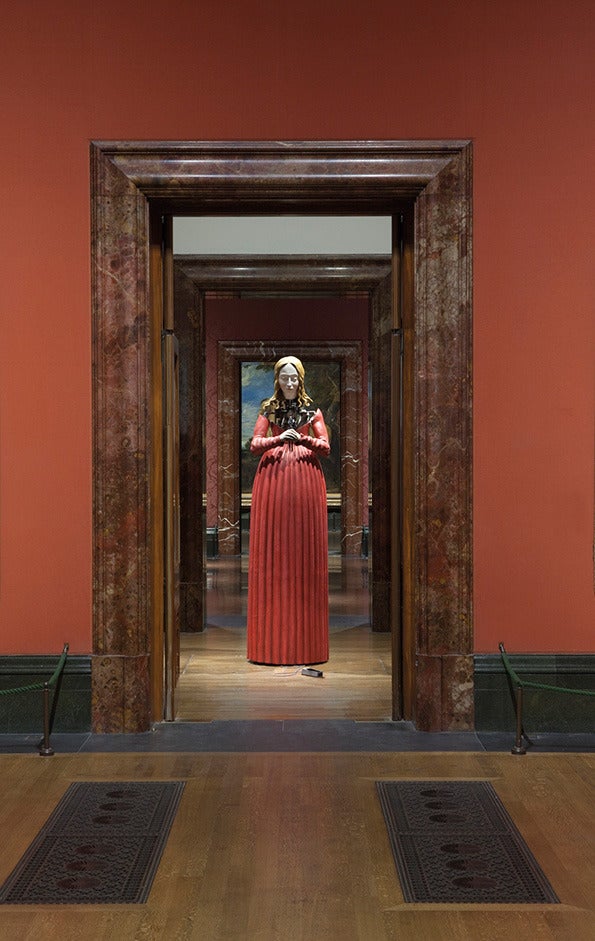 If the portraits felt a little like the blueprint for some kind of religious steampunk factory, the adjoining space is the factory itself. Landy has taken inspiration from 60s and 70s kinetic art in the vein of swiss sculptor Jean Tingley and created larger-than-life sized models that wind themselves up and spring to life. A pedal on the floor causes St Jerome to batter his chest with a stone. The noise echoes around the usually quiet gallery. A large spiked wheel of fortune is connected to a handle which visitors are encouraged to spin. The huge disc creaks to a halt, landing on gnomic messages etched in gold: “Reject everything and take refuge in the Lord Jesus Christ”, “Marry a Roman emperor or submit to excruciating torture and die”, “Angels will soothe your wounds”.

In winding up and letting go we become one of the mob. Manipulating the work of art in an age of mechanical reproduction, the machines flagellate themselves ad infinitum. “Doubting” Thomas’s hand rams into Christ’s side. A machete slices through the scalp of Peter Martyr. When I visited at the weekend, two of the saints had hammered themselves into submission, literally. Pieces of A4 paper had been sellotaped to Ss Thomas and Francis: “Not currently operational. We apologise for any inconvenience caused.” 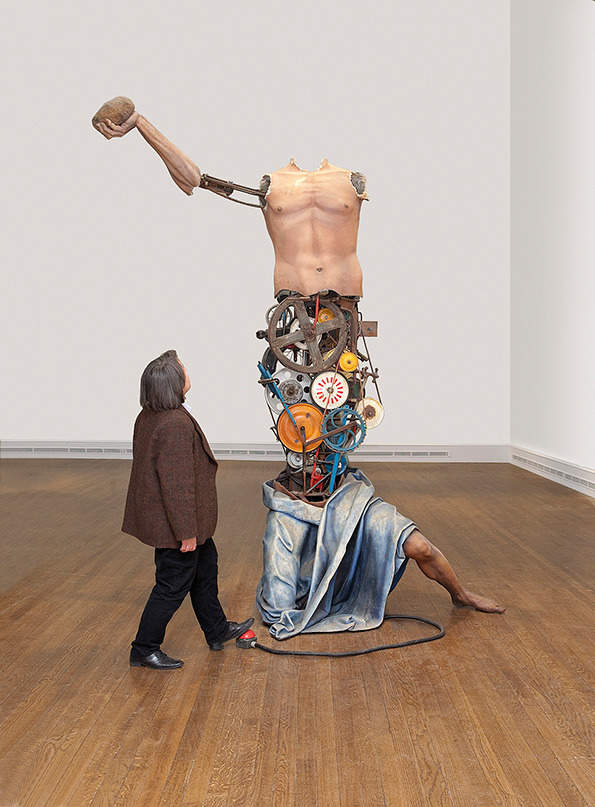 The accompanying film presents Landy as a kind of Holy Innocent, playing with the collection, stroking a dog. He came to the gallery and was moved, provoked and confused by the depictions of saints in glorious works by the Italian Renaissance artists Crivelli, Botticelli, Pintoricchio and El Greco. The destructive aspect appealed to him. He does not believe there is any spiritual element to the work – though this assumes that spirituality is only an ethereal, non-corporeal impulse. The bloody carnage wreaked on canvas by the Renaissance masters is brought to life and mechanised in Saint’s Alive. The sculptures are loud and as dangerous as industrial machinery. Though the exhibition is a little slight and relies upon montage – building on an established tradition rather than creating ex nihilo – it will have been a worthwhile experiment for the Gallery if it manages to funnel the tourists out of Trafalgar Square and into the corridors behind.