In the Autumn of 2011, DC comics took the unprecedented step of ending all of their ongoing series, and restarting them from number one with a streamlined continuity and shuffled creative teams. Superman and Lois Lane were never married; Barbara Gordon — Batgirl — still suffered the events of Alan Moore and Brian Bolland’s The Killing Joke but was never crippled as a result; and poor Wally West, the third Flash, was erased from existence entirely.

Given one of the key features of corporate comics has always been their decades of continuous storylines (a blessing and a curse: what can be a selling point for dedicated fans is also a notorious hurdle for new readers to leap), the move was audacious. But it wasn’t just continuity which suffered. The initiative — promoted as “The New 52”, after the 52 titles which were restarted from issue one — also marked a new low for an industry which has historically ranked the importance of the fictional characters above the very real writers and artists who create them.

DC “promised” an end to late shipping of titles — a problem which had, admittedly, plagued some series before the reboot — which they achieved by swapping out artists who were too slow to hand in finished pages. Even series launched by superstar artists, like Yanick Paquette on Swamp Thing, weren’t immune. He was supported by Victor Ibáñez by issue three. And they’ve shown the same tendency towards writers, throwing Gail Simone off Batgirl (apparently due to her refusal to write the storyline editorial had requested), only to recant following fan outrage.

For obvious reasons, this policy hasn’t led to the best results in the company (though it has indeed ensured that most comics ship every month on cue). It’s had to resort to further gimmicks down the line, including a “zero month” (when all comics ran an issue zero, partially to straighten out the already convoluted backstory, partially to boost lagging sales) and an increasing number of crossovers and mini-events.

All of which is to say that the diamonds in the rough deserve extra credit. Managing to turn out a good comic despite everything being stacked against you is a mark of impressive talent. And The Flash shows that Francis Manapul possesses a hefty amount of that.

The rebooted version The Flash is a rare thing in corporate comics, since it’s largely the work of one man, Manapul (Brian Buccellato has a co-writer credit and colours the work). Manapul had been the artist on the previous series of the Flash, scripted by DC Comics’ Chief Creative Officer Geoff Johns, and did an admirable job. But he was still illustrating a relatively staid script.

Writing for himself gives him the opportunity to really cut loose. The most obvious example of his freedom is the way in which the title of the comic is intertwined with the narrative in every issue. Take the splash from the first of the eight comics in the hardcover collection: 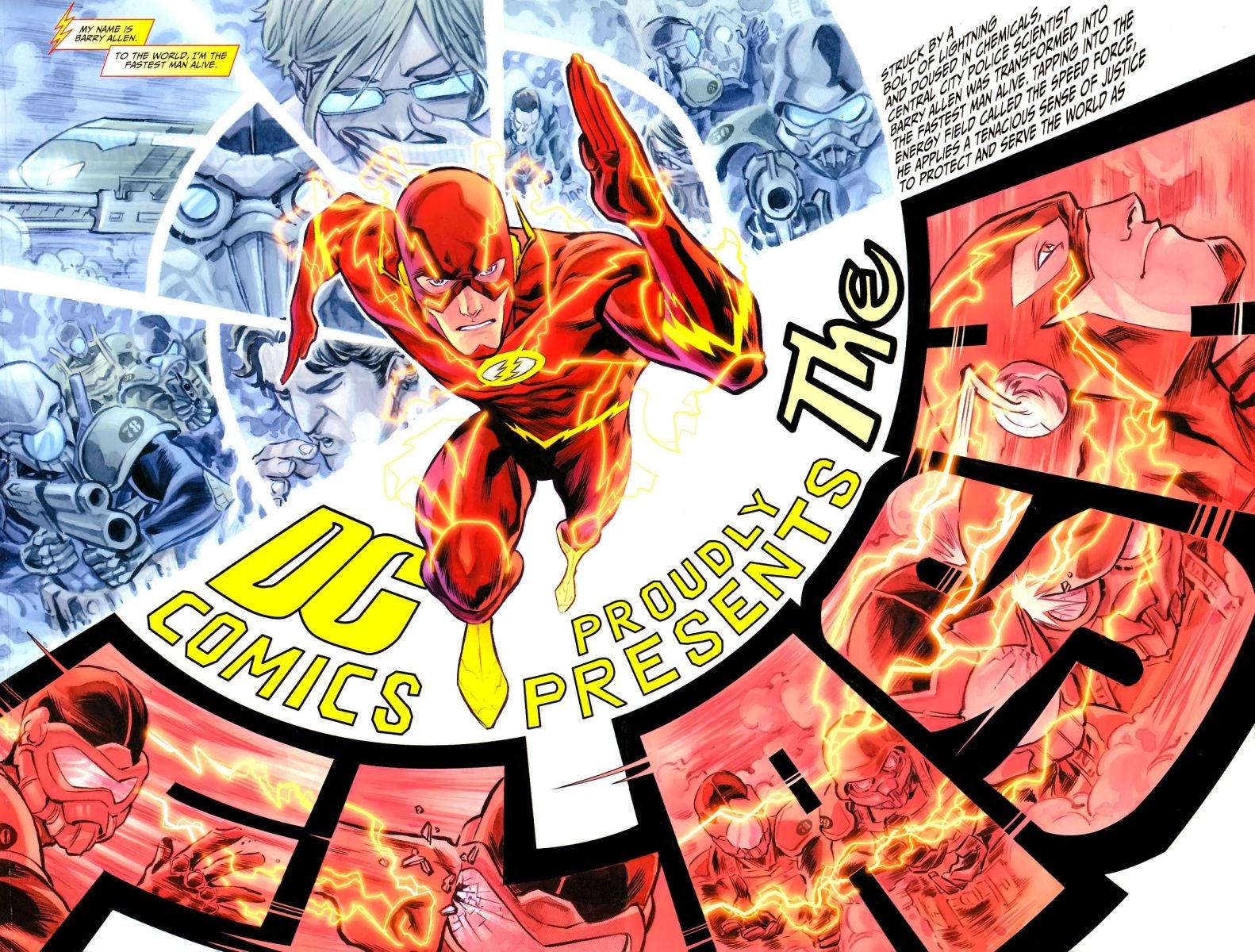 As well as being an impressive pin-up of Barry Allen, the second Flash and lead of the book, it continues the narrative of him taking on the masked intruders who appeared on the prior page.

That inventiveness with layouts is apparent throughout the book. A recent highlight, which will likely be collected in the second hardcover, features a nine-page sequence which stitches together to make one continuous spread. And the way Manapul illustrates a new power the Flash develops in the second issue is a wonderful example of exposition which is only possible in comics — the same effect simply couldn’t be replicated in prose or cinema. Manapul knows his medium, and plays to it.

The flip side of an inventive young illustrator being given near total control over a book is that The Flash is the first mainstream work that he has written, and it shows. The dialogue can be a bit clunky, although to a certain extent that matches the artistic style which, in its bold colours and uncluttered line-work, evokes DC comics’ Silver Age. More problematic is the plot and character work. The first arc shows an inventiveness which bodes well — who’s the perfect villain for the fastest man alive? Someone who can be multiple places at the same time, of course — but it tapers off after that. The characters are largely unaltered from the archetypes (super-smart scientist, bossy lady reporter, hard-working forensic detective) which have existed in superhero comics for decades.

But comics are a visual medium, and in corporate comics that fact seems increasingly forgotten in favour of brand support and a continuing churn of dangerous adventures for the leads to face. In giving Manapul the chance to focus on another aspect of the medium, DC made at least one good decision before it all went wrong.