The recent discovery of Richard III’s bones has reignited the debate over the fates of his nephews, the Princes in the Tower. An urn in Westminster Abbey contains the mixed bones that were discovered buried under a flight of steps in the White Tower, in 1674, and may hold the final key to their identities. However, even if royal permission were granted for the extensive DNA testing required, this would only prove the fact of their deaths, rather than the names of the perpetrators. The true story of the unfortunate boys’ murder(s) when they were aged twelve and nine will probably never be known. However, while undertaking research for my biography of Richard III’s wife, I discovered information that could imply their uncle’s guilt.

Last seen in early July 1483, the boys vanished from sight after being declared illegitimate in a sermon preached by Dr Shaa at St Paul’s Cross, just days before Richard became king. Their father, Edward IV had died at the age of forty, fully expecting his eldest son to inherit his throne. But on his way to London from Ludlow, the Prince was intercepted by his uncle, removed from his mother’s relatives and lodged in the Tower. Hidden away deep behind its age-old walls, the princes’ royal blood made them dangerous claimants to the throne, to whom many of their father’s former staff would prove unfailingly loyal. With their parents’ marriage called into question, as well as rumours regarding the circumstances of their father’s conception, Richard may have hoped that the problem of the two little boys may simply have disappeared. They did, but the problem didn’t. It is still raging, over five centuries later.

Now new evidence has come to light, suggesting a possible solution that is resonant of another English king, the sort of indirect murder through wish-fulfilment that had seen Henry II’s knights dispatch his archbishop, Thomas Becket in the 12th century. Undertaking research on Richard’s reign, I unearthed records of his activities in Canterbury, six months after the boys’ disappearance, which may offer evidence that the King had something weighty on his conscience.

Richard was in the north during the summer and early autumn of 1483 when the deaths of the Princes are thought to have occurred. While it is generally accepted that he did not wield the knife in person, popular theories – and Shakespeare’s famous depiction – have his agents stealing into the Tower at dead of night and smothering the boys in their sleep. Richard’s servant, James Tyrrell, who confessed to the murders during the reign of Henry VII, was in London early in September 1483, collecting clothing from the Tower for the investiture at York of Richard’s son, Edward, as Prince of Wales. He had the opportunity to commit the crimes in the King’s absence, but did he have royal permission?

Following the Becket theory, Tyrrell may have understood his King’s secret wish that the inconvenient boys be dealt with. In an unguarded moment, Richard may even have wished out loud that they would vanish into thin air, which a loyal but unscrupulous servant could have taken as an indirect order. Perhaps it was even intended as such. Tyrrell or another may have carried out the deed without royal sanction, in anticipation of rich rewards. He was appointed as High Sheriff of Cornwall in 1484 but then went to France, returning only after Bosworth; his confession was “extracted” following his support of Yorkist claimant Edmund de la Pole in 1501. Whether or not Tyrrell was responsible, at some point in the autumn, the murderer found a way to communicate their deed to the King, whose reaction can only be wondered at. It was a political godsend for Richard, but in terms of his immortal soul, it was disastrous. 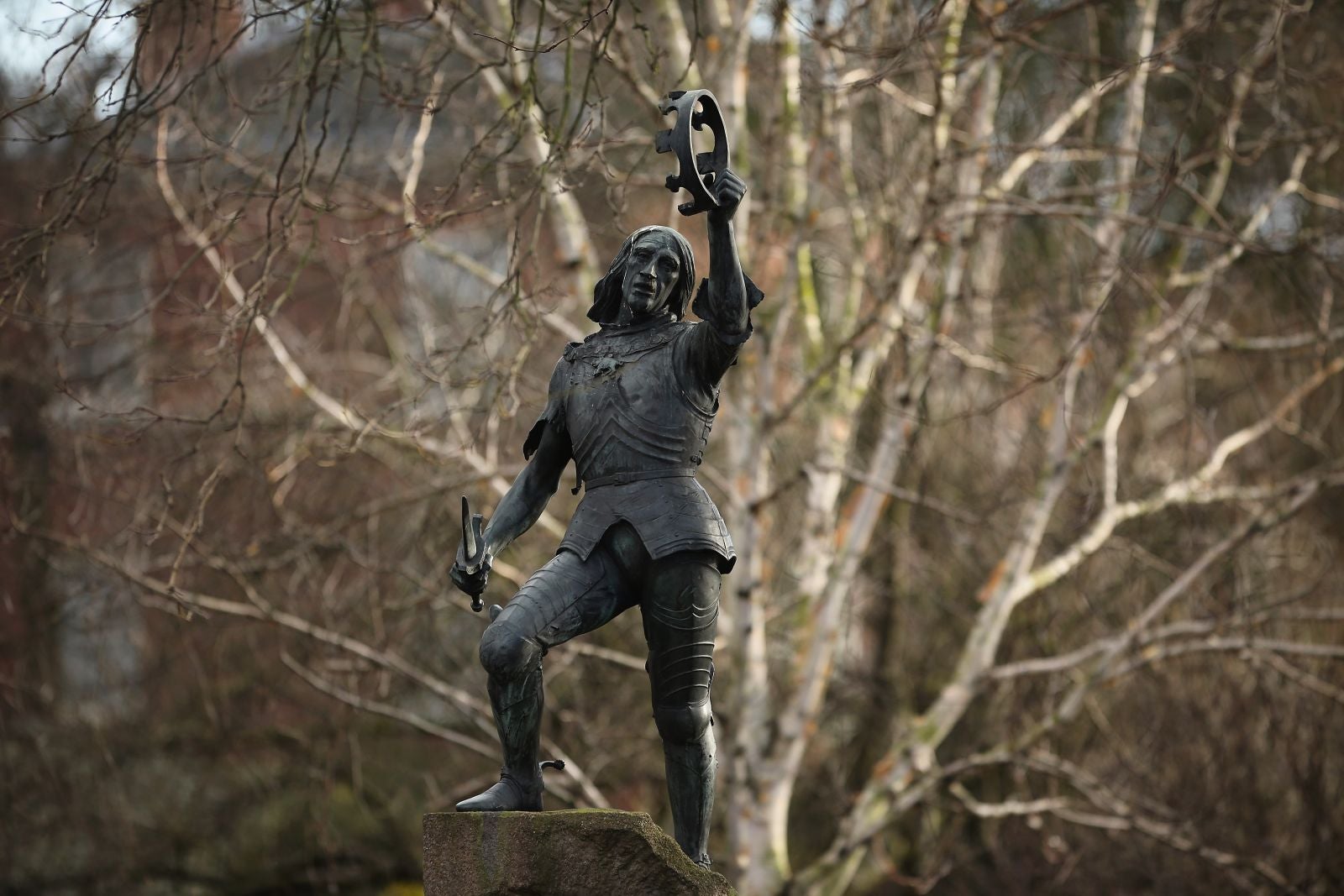 A statue of King Richard III stands in Castle Gardens near Leicester Cathedral, close to where the body of Richard III was discovered. Photograph: Getty Images

This is where my research comes into play. Back in the 1980s, Anne F Sutton identified that a visit Richard made to Canterbury soon after his reign must have taken place early in 1484. Until then, he was busy dealing with Buckingham’s rebellion, establishing his new royal household and preparing for his first parliament. Under the aegis of visiting the port of Sandwich, Richard stayed in the city, being offered £33 6s 8d in gold, contributed by the mayor, councillors and “the better sort of persons of the city,” although he did not accept it. The mayoral accounts indicate how he was catered for, through payments made to a local supplier: John Burton received £4 for “four great fattened beefs” and 66s 8d for “twenty fattened rams.” Payments were also made for carpentry work and for the carriage of furniture and hangings to the royal lodgings.

Traditionally, visiting monarchs would reside in the well-appointed, central Archbishop’s Palace or at St.Augustine’s Abbey, as Henry VIII frequently did and Elizabeth would do in 1573. However, I uncovered a reference in the city accounts to Blene Le Hale, outside the walls, suggests Richard did not stay within the city itself. He may have lodged at Hall Place, which from 1484, was owned by a Thomas Lovell, a possible relative of Richard’s childhood friend Francis. It is more likely, though, that he stayed in “large temporary buildings around a great tent called le Hale” on the edge of Blean forest, elsewhere called the Pavilion on the Blean. This was on the top of the hill still known as “Palmer’s (or pilgrim’s) Cross,” where the modern village of Blean overlaps Upper Harbledown. As a local resident, who studied the history of the area whilst doing my MA, I was aware of the significance of this location along the Canterbury pilgrimage route. Just as the devout did in Walsingham, many pilgrims removed their shoes in Harbledown, or “hobble-down” for the final mile and walked, penitent and barefoot, down the hill to Becket’s shrine.

In Chaucer’s late 14th century work, The Canterbury Tales, the village was also known as “Bobbe-up-and-down,” due to the poor condition of its roads. In the 1483-4 city accounts, payments were listed for repairs to the road in advance of Richard’s visit. If the King undertook the barefoot walk to make offerings at the shrine, he would have been walking in the footsteps of another notorious monarch. Three hundred years earlier, Henry II had taken that route as penance for his role in the death of Thomas Becket. Did Richard make an offering at the sainted Archbishop’s tomb? Did he, like Henry, have a burden on his conscience that he sought to alleviate?

There is no question that Richard made any sort of public penance. He did not moan or flagellate himself in public as the former King had. He was however, a devout man, even by the standards of the time, whose religious conviction is one of the aspects agreed upon by many of those who debate his motives and reputation. Of course he could not have openly bewailed their deaths in public, as this would necessitate confessing his guilt by association. Instead, he may have visited Canterbury Cathedral in order to make his peace with God. No court of law would convict Richard of the boys’ death on the surviving evidence alone; a Channel 4 televised court drama of 1984 put Ricardian and pro-Tudor experts into the witness box but after much discussion, the jury were forced to conceded that the case was not strong enough to convict him.

The truth of the Prince’s fate will probably never be known, even if the bones in the Westminster urn one day confirm that they suffered a violent death. If one of Richard’s servants had carried out the boys’ murders in his name, as I suggest, this may have represented a struggle between the nature of his succession and his religious conviction. He may have benefited, so he thought, from the boy’s deaths but gone on to undertake this atonement for the sake of his own soul. In actuality, though, it was their disappearance that underpinned his downfall and blackened his reputation for centuries after.