The nature of the sale is complicated by the council’s own purchase of the work back in 1962, when Moore sold the sculpture to the council at a fraction of the price it would have earned at auction. The reason? Moore wanted his work to have a life outside the private collections. He sold it to the council with the understanding it would be displayed publicly, enriching the lives of those in a socially deprived section of London. The sculpture sat on the Stifford housing estate in Stepney Green until 1997 when, following the demolishing of the estate and an act of vandalism, it was loaned for its own protection to the Yorkshire Sculpture Park.

Now, the cash-strapped council faces hefty budget cuts to the tune of £90m over the next four years. Profits from the sale of this valuable asset – an estimated £20m – would be a helpful cash injection for the borough’s draining funds. Moore, Serota and Boyle, however, say the move “goes against the spirit of Henry Moore’s original sale” and the artist’s “demonstration of the postwar belief that everyone, whatever their background, should have access to work of art of the highest quality.”

Many others have backed that position over the weekend as plans for the sale seem set to proceed. Rowan Moore argued, also in the Observer, that the act would set a dangerous precedent, devaluing the role of art within a community. “Taken to its extreme,” he writes, “it could be used to cut off all cultural funding whatsoever. The Whitechapel Gallery could be sold to Tesco, to raise money for deserving causes, houses could be built on parks and various council-funded embellishments to the streets of the borough should never have happened.”

So, a beautiful piece of art bequeathed by one of Britain’s most valued sculptors and active socialists is being sold in the imploding wake of austerity cuts and public apathy towards the arts. It’s a juicy, red meat issue leaking strong opinions. Does the public, for whom this work was indented, no longer give a bloody blister about art? Are the “cultural elite” a bunch of toffs for presuming they know what’s better for a community than their own council? Has money grubbing trumped social idyll once again? It all makes for much hair pulling, indecisive see-sawing. Quick assumptions and even quicker conclusions are terrifyingly tempting. But is it really fair to generalize on behalf of large groups of people, be it “the cultural elite” or the “deprived” of Tower Hamlets? Shouldn’t we just ask the two sides to speak for themselves?

Luckily for us, the BBC have already done that – to a degree. The results are still polarizing. In a video report last month, Alice Bhandukravi spoke to Tower Hamlets councillor Shahed Ali, who said:

“We’re not selling the piece out of choice. It’s just that it’s uninsurable. Obviously the piece is very much valued, and we’d love to keep it in the borough if we felt it was a sustainable option. Unfortunately, that’s very hard to do.”

“Well I suppose we could sell the Tower of London, which is also within the borough. There would be all sorts of people who would pay a great deal of money… but nobody would suggest anything as crazy as that. Culture is part of our history.”

Bhandukravi puts the question to several passersby. Based on this rather microscopic survey (of the three people interviewed, two were in favor of the sell, one against) we can (very) loosely speculate that perhaps two-thirds of the boroughs inhabitants would be in favor of “putting the money to better use”.

“I think Tower Hamlets is in a really tough position. Finding a Henry Moore is like finding £20 million quid down the back of the sofa. You’ve got to decide, do we want it to enhance the public realm, or do we want to use that money to get kids into jobs, to support urban regeneration?”

Twenty million pounds! That is, indeed, a lot of money. The strange reality is that £20m, an astronomical sum, is really but a small fraction of the council’s yearly budget. A quick look through Tower Hamlets’ annual spending report (made public on their website) reveals that £20m (already a generous estimate, others put the sale price at closer to £5m) is a mere 1/15th of the yearly school budget, 1/9th of the amount spent annually on benefits, and a quarter of the yearly social housing bill. It’s not even enough to cover a year’s worth of waste removal – which rumbles in at over £30m annually. The sale looks more a band-aid than a long-term solution. Not surprising, then, when Nicholas Serota equates the move to “selling the family silver”.

Perhaps it was Draped Seated Woman’s sabbatical in Yorkshire that led to her undoing. Fifteen years of listless efforts to reinstate the work in the borough – amidst talk of insurance costs and fears of scrap metal theft – is sufficiently long enough for a generation to grow up without it, for its meaning to erode, its shape to disappear from common memory. Fifteen years on, and she’s begun to resemble an out-moded antique in the back of the wardrobe, prime for the pawn shop.

Again, the fast conclusions are tempting. It’s easy to say that no one cares about art any more. Not the government, not the council, not the public. Surely the vandalism which led to the sculpture’s relocation fifteen years ago is proof enough that no one really loved the draped woman. Then again, if a thousand walk by and admire her, there’s little physical evidence left behind. The opinion of the one with the spray-can speaks the loudest. Seems unfair, then, to condemn an entire social enterprise on the basis of defacement alone.

So, fast conclusions aside, the nagging sorrow is that the borough must even have to choose in the first place. Great art in the public sphere, urban regeneration, jobs for kids – can’t we have it all? Of course we can’t. The grim reality is that art, as always, falls into the realm of the frivolous. It becomes the expendable. So it’s out with Moore’s lovely little utopian dreams – in times of practicality, there simply isn’t space.

Does the debate end there? Do we accept these dismal terms and resign? Probably not. But even as a former resident of Tower Hamlets, I feel genuinely unqualified to judge what the borough needs most. What I can say, though, is that great art brings with it great dignity. Works of beauty and significance have the power to instil within a place a sense of value, and to make its residents proud. However, good schools, new jobs, and social support can bring equal dignity to a community. The question is whether the draped woman will achieve greater dignity in her original stage, or remoulded as a blank cheque.

Confliction abounds. Perhaps history will repeat itself in the form of a philanthropic collector who purchases the piece, only to donate it back to the Hamlet. Perhaps the council will pursue one of the many suggested sites for safe relocation (Queen Mary University and The Museum of London have both offered). Perhaps we’ll see the “Henry Moore Library” opened up in Stepney next year on the sale’s proceeds. Perhaps we’ll only see the rubbish being taken out more efficiently. The only guarantee is that we won’t have it all. It’s a real shame. 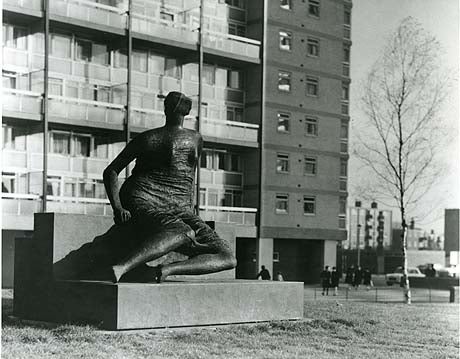