The humble grey pigeon. Many would volunteer it as the most detested of urban wildlife, second only perhaps to sewer rats and cockroaches (unsurprisingly, they’ve often earned the title “rats of the sky”). At best we regard them as a nuisance, at worst we’ll run them over in our vehicles with brusque disinterest. The carcasses on Commercial Street are proof enough.

Cheerily subverting our long-held notions of pigeon unpleasantries are Swiss artist Julian Charrière and German photographer Julius von Bismark, who revived their ongoing project Some Pigeons are More Equal That Others for this year’s Venice Biennale. First exhibited in Copenhagen, the artists use an airbrushing tool to dye the feathers of the pigeon in a multitude of florid colours. The painted pigeons are then released in Venice’s bustling St. Marks Square, where they mingle amongst their more modest brethren as a sort of live performance piece.

And whilst the project has been well received in the art world and delighted local tourists, inevitable ethical questions have been raised. “An initiative with so little respect for defenseless animals is to be condemned”, wrote a blogger. “Are works of art justified as such even when they involve other, non-consenting living beings?” demanded another.

Charrière, in defense of the artwork, has been quoted as saying that the process is “without any danger to the animals” and was rather conceived as a way to elevate the status of the bird. “This way, the pigeons will be better regarded”, he reminds us.

And it’s true. A fuschia pink pigeon is inherently more likeable then the soot-stained variety. But should the pigeons be proud of their false plumage and new-found positive attention? Or is it inherently wrong to implicate live animals in a spectacle for human entertainment?

I’d like to assume that Charrière and Biskmark have taken all such thoughts into account, and therefore constructed a project whose intention is to provoke mixed reactions. On the one hand, they’ve elevated the status of these previously dismissible creatures simply by changing their superficial appearance – and in the process raised shrewd arguments about the capricious relationship between outward beauty and positive response.  It’s a theme Charrière has explored in previous works like The White Dove, in which a pristine white dove was painted grey with food coloring and placed amongst pigeons on the streets of Berlin in an act of reversed social ascension.

On the other hand, such projects are equally an unashamed exploitation of unwilling participants. Though, perhaps no more manipulative than the dog shows and the dressage competitions we’re quite contented to celebrate.

Contemplating whether an artist, or indeed any human, has the right to exercise authority over an animal’s body certainly leads us down a slippery slope. It’s a fact that we’ve long decorated animals for our own amusement and visual pleasure. Some call it cruelty, others their right. Charrière and Biskmark are working well within the boundaries a tradition which, if handled with care, can serve as both an artistic practice and a disquieting tool for self reflection. 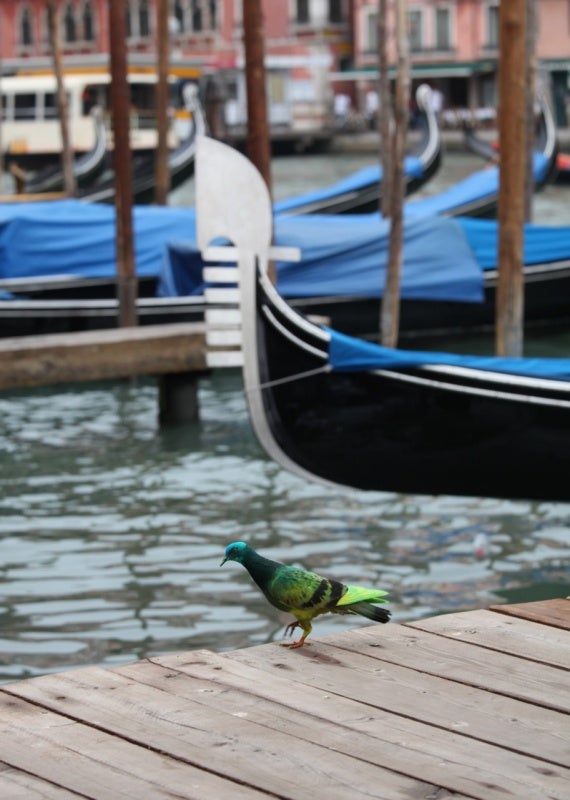