One of the most famous photographs of Chief Seattle, a Native American leader of the Pacific North-West, was taken in 1864 against his will. He, and the people of his time, believed the mysterious process could steal away one’s soul. It’s a sentiment that, despite demystification and democratisation, still haunts the medium. Perhaps it is the frank vulnerability of a photographic portrait, the power of the camera to reveal and to pry, the tendency of the lens to render subject as spectacle. Susan Sontag wrote, in On Photography (1977), that “To photograph people is to violate them, by seeing them as they never see themselves, by having knowledge of them that they can never have; it turns people into objects that can be symbolically possessed.”

It was these thoughts that wound their way into my mind as I walked round the airy east wing of Somerset House, taking in Gideon Mendel’s Drowning World. Over the course of five years Mendel has documented the aftermath of flooding in India, Haiti, Pakistan, Australia, Thailand and the UK. Tired eyes peer out from at the viewer as his subjects stand knee (and sometimes neck)-deep in floodwater. With subtle composition and an arresting use of colour, Mendel’s portraits are beautiful objects. But are these images – at times harrowing in their openness – an exposé on disaster, or an exploitation of victims for the sake of art?

Mendel would reject that. His career has often blurred the boundaries between journalism and art. In the past decade he has worked extensively – through photographs, films and text  – to bring attention to a number of causes, from the plight of HIV/AIDS sufferers in Africa to the 18,000 caught in “limbo” after the repeal of California’s Proposition 8, which legalised gay marriage. Drowning World displays a similar commitment to awareness. “My intention,” he says, “is to depict them as individuals, not as nameless statistics. Coming from disparate parts of the world, their faces show us their linked vulnerability despite the vast differences in their lives and circumstances.”

You might say that this “linked vulnerability” is the hallmark of the exhibition. Mendel’s strength lies in an ability to democratise. Each photograph is crafted with a conscious uniformity: subject front and centre, what remains of their personal possessions forming the backdrop. The tactic that allows the artist to display his diverse subjects with balance: the Bangladeshi, the Thai, the English and the Australians all holding equal weight inside his frame, despite disparities in setting or style of dress, a pattern emerges.

Another strength lies in Mendel’s inclusion of two films, Living with Floodwater, filmed in Thailand in 2011, and When the Floods Came, filmed in Pakistan and Australia in 2010-11. Both fall squarely on the side of “art” rather than “documentary” film, but Mendel’s ability both to inform and to arouse visual pleasure lends them considerable impact.

Living with Floodwater depicts daily existence in post-flood Bangkok. The streets, swollen with water, are so sad yet so beautiful – agonisingly so. Barges of eggs pass by, vendors sell food and shoes, rowboats convene to form social flotillas where people pause. Free from narrative voice over or any other attempt to pre-digest meaning, it’s a near silent three minutes that leaves space for rumination – a window into a world both normalized and irrevocably damaged.

When the Floods Came is made from footage shot in Pakistan and Australia, just six months apart. Presented in a diptych format, with images running concurrently on adjacent screens, the seven-minute film brings similarities and disparities into sharp focus. It’s a tried and tested tactic that here feels pleasantly unforced. Stand back and watch as a Bangladeshi scoops water with a bowl and an Australian scoops rotten fruit from a storefront, as refugees sleep in dusty desert camps and in large, linoleum-floored gymnasiums, as a camel wades and a kangaroo hops. But the emphasis here is not simply on differences (though differences there certainly are), but once again on collective experience, and the levelling power of a destructive force that pays no mind to social stratifications.

It is impossible to talk about this exhibition without also talking about global warming. Mendel himself sees the purpose of his projects as “an attempt to visually address the issues of climate change”, and Somerset House is presenting this exhibition as a prelude to a collaborative theatre piece with World Stages London, to be titled Climate Refugees. The extremity of global climate change is written all over this work, though without with a heavy hand.

Drowning World is a tasteful and unashamedly beautiful project that falls far from exploitation. In the face of devestation, Mendel takes pictures that liberate rather than imprison those depicted. These pictures capture the souls in the wake of loss. 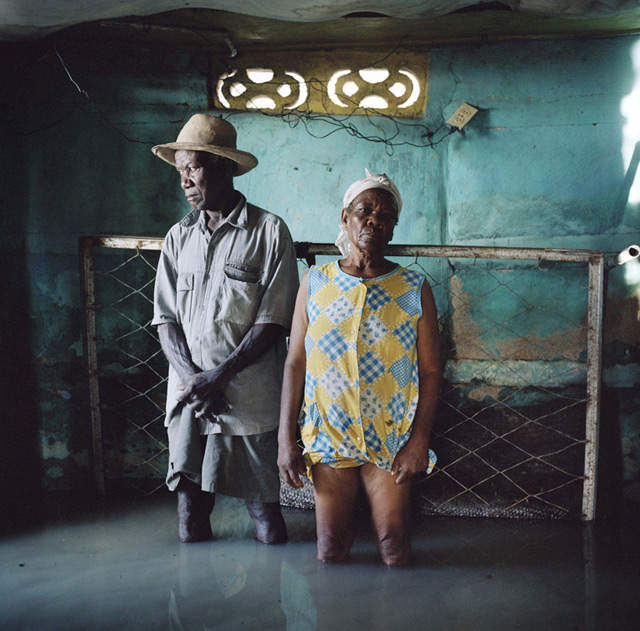 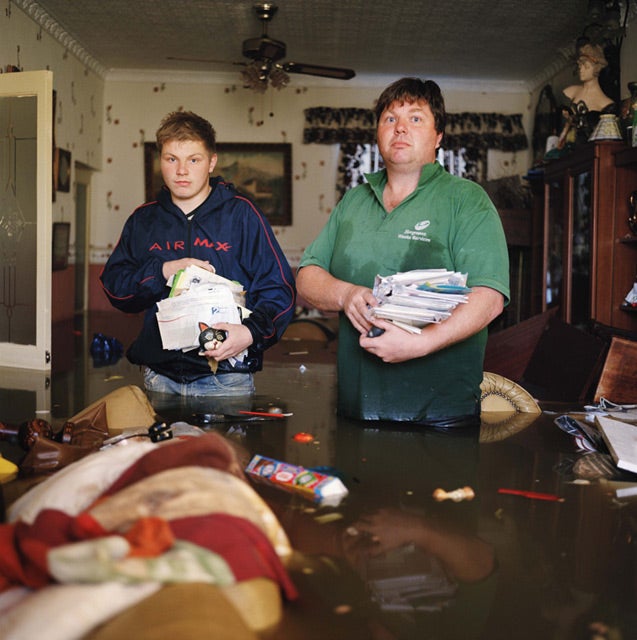 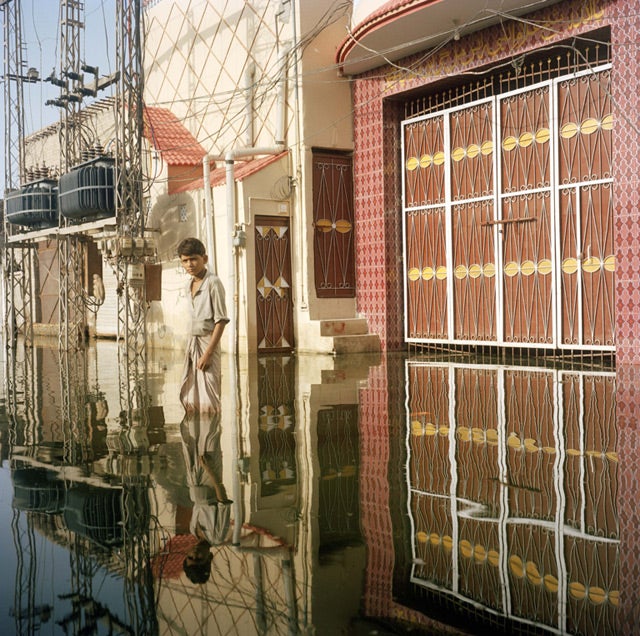 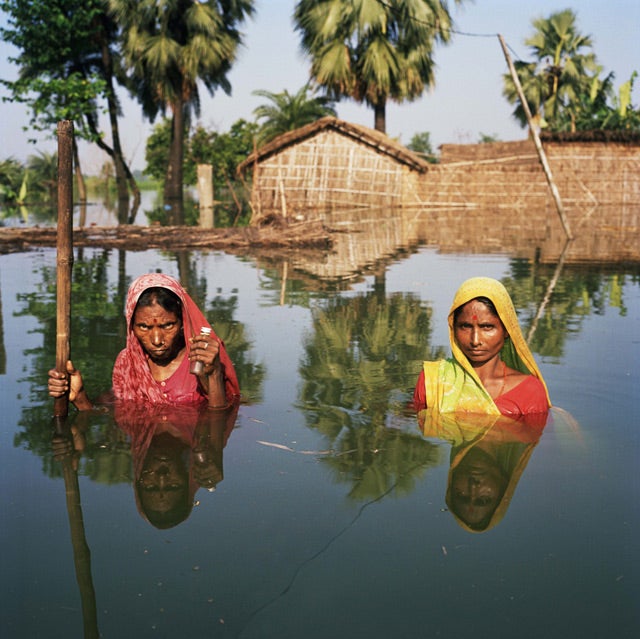 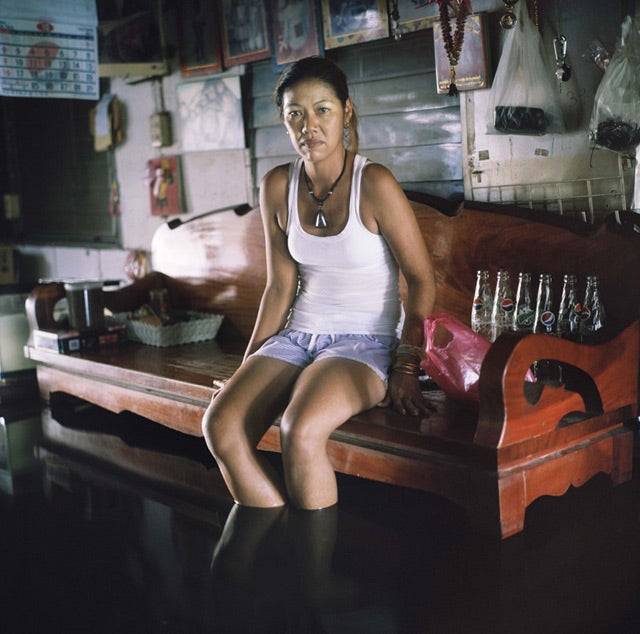