During Theresa May’s six-year stint as home secretary, her signature policy was the “hostile environment”: a series of measures intended to turn private citizens into unwilling immigration authorities and thus make it so unpleasant to be a migrant in Britain that people would just leave of their own accord, which amounted, the UN later said, to “stoking xenophobia”.

This was an unpleasant enough way to go about treating illegal immigrants, but so useless did the Home Office become under May’s tutelage that it was hardly any friendlier to anybody else. It forced entirely legitimate overseas students to queue outside through the night to sort out their paperwork; then, for an encore, it deported British citizens who happened to lack the requisite bit of paperwork while black.

All of which is to say that, while we can criticise the massive, massive hypocrisy of May’s refusal to support Priti Patel’s latest wheeze — sending migrants to Rwanda — “on the grounds of legality, practicality and efficacy” (as the former PM so brutally put it), it’s hard to portray her as a soft touch. Patel has genuinely come up with an immigration policy so appalling and so cruel that even Theresa May won’t back it.

To be fair — a thing it goes against every fibre of my being to be towards Theresa May, who is horrible — she’s right. Paying another country to simply take those who want to claim asylum away so that they’re not our problem any more would be an abrogation of Britain’s moral responsibility even if the country we were paying to do so hadn’t been the site of the worst genocide of the last 40 years. The widely repeated zombie stat that the UK has ultimately accepted every Rwandan who claimed asylum here seems not in fact to be true. What is true, though, is that Rwanda is a country from which people quite frequently claim asylum. The country’s record has been attacked by everyone from Human Rights Watch to the US State Department, and it’s a pretty hostile place for LGBT people: this, given that prejudice and violence against such groups is often the reason why people claim asylum in the UK in the first place, is a pretty big indication that this policy is either poorly thought through, outright cruel or, more likely, both. 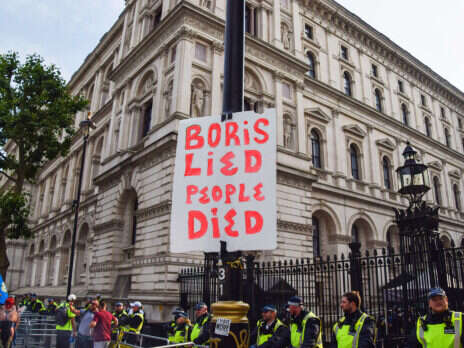 On the upside, if a policy this bad exists, it’s probably not actually going to happen. As Anoosh Chakelian, the New Statesman‘s Britain editor, pointed out on a recent podcast, this is hardly the first time the government has announced something like this. It’s never actually happened in practice before. Perhaps it won’t this time either.

Something else that seems increasingly unlikely to actually happen is that Priti Patel makes it any further up the greasy pole. Her cruel and unhinged promises, such as sending Royal Navy boats out against dinghies full of migrants in the Channel, have appalled the liberal left, while her failure to actually achieve anything has alienated the illiberal right. The latest Conservative Home survey of its readers found she had less support as a future Tory leader than such giants as Graham Brady or Kemi Badenoch. Theresa May brought the appalling attitudes she employed at the Home Office to Downing Street: we can take at least some comfort from the fact Priti Patel is unlikely to do the same.