Headquarters is a new column about buildings and the companies inside them. What do corporate architecture, design and planning tell us about a company, its business and the economy?

In 2018, Facebook unveiled a new addition to its frumpy campus in Menlo Park, near San Francisco. Designed by Frank Gehry, the new building used a single floor to create nearly half a million square feet of space. It was designed specifically to foster the spontaneous interactions that Silicon Valley believes are crucial to innovation. This belief – that creativity necessitates everyone not only being in the same location, but on the same floor – has driven the design decisions not only of Facebook, Google, Apple and Amazon, but of all those who aspire to be like them.

Tech companies don’t spend a lot of time worrying about the past. If they did, they might recognise that these sprawling HQs are very much rooted in tech’s early days, when companies such as Bell Labs set the template for spaces of innovation. Bell’s bucolic campus in Holmdel, New Jersey, designed by Eero Saarinen in 1959, provided offices and laboratories for 6,000 workers in a single building. But finding places that can accommodate these massive floor plates today, especially in dense urban environments, is a far more complicated endeavour. And the pursuit and acquisition of real estate that enables them has impacted locational decisions and reshaped neighbourhoods and city blocks – until it didn’t. 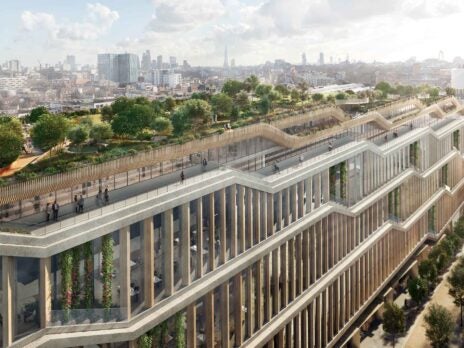 How WeWork foresaw the end of the conventional office

In the spring, just weeks after the pandemic shutdown, Twitter declared that its employees could work from home forever. Google and Apple were more measured, suggesting return-to-office dates months away. It was not long before Facebook discovered that its workers had never been more productive. Before most of us had any sort of inkling how long Covid-19 would necessitate shelter-in-place and so many other restrictions on human interaction and the running of businesses, Facebook CEO Mark Zuckerberg announced to his employees via livestream in May that, “We’re going to be the most forward-leaning company on remote work at our scale…I think that it’s possible that over the next five to 10 years […] I think we could get to about half of the company working remotely, permanently.”

Just like that, Big Tech’s big architectural idea – the conflation of physical space with innovation – had evaporated. On the one hand, Facebook could be congratulated for having recognised the necessity of safety measures early in the pandemic. But on the other, Facebook, Google and others have always maintained that their innovative corporate culture was what set them apart. How could they be so quick to abandon the physical core of that culture?

When Facebook took over the million-square-foot former Sun Microsystems campus for its headquarters in Menlo Park in 2012, it doubled the density of the office space. Though this was a far more economically efficient use of real estate – each employee had previously been entitled to 270 square feet, now they got just 150 – it was outwardly presented as a shift deemed essential to collaboration. A few years later, when Facebook brought on Gehry (a choice that suggests Zuckerberg said, “I want the most famous architect!”), to design what the company described as “a new warehouse for engineers”, it turned out about as cosy as that sounds for the nearly 3,000 folks packed in there. Photographs of the interior always remind me of nothing so much as the typing pools of the 1950s, in which ladies sit in rows at their keyboards, all facing forwards.

When it opened in 2018, the 420,000-square-foot, single-storey building offered plenty of room for spontaneous interactions to occur, but only with other Facebook employees – and the workers who catered to them.

Facebook’s campus mimics a bustling small town – there are places to eat, a dry cleaner, a gym, all located on a Main Street. Here, Facebook approximates the experience of urbanism on a private business park. There are none of the pesky annoyances of working in a city centre, but neither is there the diversity and dynamism. This helped the company recruit young people who longed to work in the city, not the suburbs.

When Zuckerberg announced the company’s plans to quickly hack its way to remote working, a massive shift in the company’s culture took place. Before the pandemic, Facebook had had a strict no-work-from-home policy. For the thousands of knowledge workers who are no longer forced to confront the Bay Area’s absurd housing costs (the average house price in Menlo Park is $2.5m) or endure daily commutes of hours per day – highly unpleasant even on a Wi-Fi-enabled luxury shuttle – this is a massive win. But what about the workers who cleaned the offices, prepared the meals and drove the shuttles?

In his 2012 book The New Geography of Jobs, Enrico Moretti,  economics professor at the University of California at Berkeley, wrote that for each job in the software, technology and life-sciences industries, five new jobs are indirectly created in the local economy. And in 2012, that certainly looked to be true. The massive influx of new engineers, data scientists and social media strategists to cities required an even bigger influx of food service workers, house cleaners, yoga teachers, nannies and Uber drivers to cater to them. Now, the high-paying jobs remain while their multiplier effect has been put on indefinite pause.

The people at the lowest rungs of jobs at Facebook [and elsewhere in the US] are disproportionately immigrants, women, and people of colour. In the best of times they struggled with low wages, underemployment, and unaffordable housing. Now, as Big Tech works from home – and possibly shifts away from cities, these workers are made even more vulnerable.

City Monitor: The future is not built on concrete Part of New Statesman Media Group

This disparity existed long before the pandemic, but the current scenario lays bare the existing deep imbalance of power between the leaders of the tech economy, and the low-wage service workers who make it run.

Large tech firms were already quietly shifting employees to cooler property markets, such as Nashville, Boise and Boulder, helped in some cases by large financial incentives from cities that see such a move as a way to import thousands of affluent new workers. But as remote work becomes the norm for many of those employees, their impact on local economies could change fast.

A closer look at what Big Tech companies are doing suggests this story is not so clear-cut. Facebook continues to acquire new office space even as it commits to a future of remote work. Last month the company leased enough space in Manhattan to triple its current workforce there, including the James A Farley Building, a 730,000-square feet “groundscraper” in Midtown.
Spontaneous interaction may no longer be the guiding principle of Big Tech’s buildings, but it will return. Meanwhile, the economic fragility of those who help facilitate it never went away.