In his own dumb way, Matt Hancock just summed up the survival strategy for global capitalism. Blinking into the camera lights, Britain’s hapless Health Secretary assured viewers that he could promise to build 40 new hospitals with just £100m because “the rest of the money will come in the future”.

He was instantly ridiculed but he was right. Eleven years after the financial crash, the only dynamism still left in the system is being driven by the twin engines of rising debt and money creation by central banks. Each of these represents a claim on the future: the problem is, it’s a future that may not exist.

With Germany sliding towards recession, and some $17trn worth of debt now yielding negative interest rates, policymakers are coming face to face with an existential question: what happens when even borrowing and printing money on an unprecedented scale no longer drives sufficient growth? And for the banking industry it poses an even sharper question: what happens when the time value of money evaporates?

Let’s present the problem in graphic form. First, since the financial crisis of 2008, the world’s companies, households and states have borrowed an extra $57trn, taking the global debt pile to an estimated 325 per cent of GDP.

Global debt – in dollars and per cent of GDP 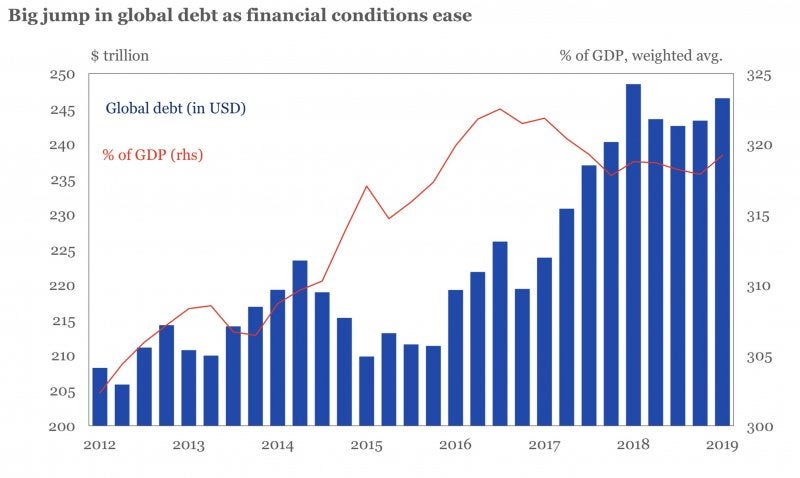 Second, in order to keep the world economy from depression, the central banks have been forced to print money to the tune of $20trn. When, according to their established doctrines, the US Federal Reserve and the European Central Bank simultaneously tried to unwind quantitative easing over the past 18 months, global growth began to slow. As a result, the ECB is preparing to resume unlimited purchases of government debt, while the Fed has cut interest rates twice. 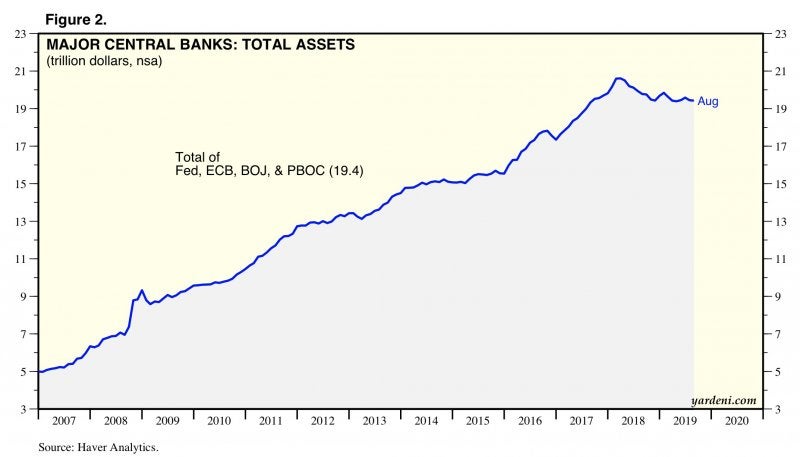 Exhibit Three is the impact of quantitative easing on interest rates. As an influential paper by Larry Summers and the Bank of England’s Lukasz Rachel shows, real interest rates in the world’s most advanced economies are now negative and likely to fall further. In layman’s terms, for more and more savers, there is no income to be generated from putting money into the bank, or lending it to a government by buying bonds.

Fourth and finally, in August this year, the so-called yield curve on government debt “inverted”. Normally it should cost more for a government to borrow money over ten years than over two, but the cost of borrowing short term has surged, while the cost of borrowing long-term continues to fall. This chart shows the rapidly narrowing difference between two-year and ten-year borrowing for the US.

Spread between 2-year and 10-year US bonds

While this is usually a signal of impending recession, some in the banking industry are going further, saying it signals the end of commercial banking as a business model. Banks traditionally use their market power to borrow cheaply over the long term and lend expensively over the short term. If you compare your mortgage interest rate, or the interest on your credit card debt, to the below-zero rates the bank is paying you will see why.

But if the short and long-term costs of borrowing are equalised, says the banking analyst Holger Zschaepitz, then the interest rate model is dead. “Historically,” he writes in Die Welt, “banks made money out of time. If time no longer has a price, because there is no more interest, nothing can be earned.”

As a result of these developments there is now rising panic in policy circles, both over the short-term future of some banks and the long-term future of capitalism. According to Summers and Rachel, the only thing stopping interest rates from collapsing further and faster is the debts and deficits incurred by governments since the Lehman Brothers collapse, and the expansion of social security spending that enabled.

Secular stagnation – a condition in which there is no growth and no tools left to stimulate growth – is a real possibility. If it is avoided, says Summers, that will only because policymakers choose to do something different. But what?

The obvious answer is for governments to borrow and spend, while adopting policies to force the savings of the rich and middle classes out of the safe haven of government debt, and into the world of risk-taking in the real economy. That will mean hiking the global debt pile even higher, but it is what central bankers are now telling governments to do with urgency.

Former ECB president Mario Draghi, in a parting shot at the German political elite, not only urged them to abandon austerity but to create a fiscal union in the eurozone to help stimulate growth. Jean Pisani-Ferry, an influential economist at the Breugel think tank went further, urging central banks to finance a state giveaway by transferring thousands of Euros directly into the bank accounts of ordinary people. Like hapless Hancock, in other words, the entire policy elite of the Western world is now hoping that “the future” will bail out the present.

Quantitative easing was always premised on the idea that central banks could withdraw the $20trn injection of free money, once normal growth resumed. Likewise, the massive debt pile has been accumulated on the assumption that both growth and inflation will, at some unspecified point, rise – and the ratio of debt to GDP will fall.

Yet the long-term sources of growth are failing. For the past 20 years we have been reliant on poor countries catching up with rich ones, and the expansion of the global workforce, rather than rising productivity. For the next 30 years, both “catch-up” growth and population growth are predicted to peter out, while nobody is prepared to make any predictions about productivity.

When they bemoan the threat of secular stagnation, economists like Summers usually attribute it to the “maturity” of industrial economies. There is too much money saved and not enough risky endeavour left to spend it on. The fascination among rich people with space travel could be seen as the clearest signifier of this.

If that’s the only problem, then traditional left-wing social democracy has the answers: tax the rich, suppress speculative and rent-seeking business models, control the flow of capital and spend massively on investment to drive growth and productivity. Paradoxically, then, the government that could unlock this solution is the one the global elite is trying to stop: a Labour-led government with John McDonnell as chancellor.

But the savings glut and the investment strike are not the only problem, nor even the main one. For me, the shadow of secular stagnation is only a symptom of a bigger problem, which is the exhaustion of capitalism’s ability to adapt and self-renew through technological change.

It’s not that technological progress has stopped: on the contrary it has speeded up. The silicon chip in your mobile phone now contains five times more processing power than the server farm that generated the movie Toy Story in the 1990s.

The problem is: information technology is different. As I argued in PostCapitalism (2015), information technology collapses production costs, allows automation at a speed that new job creation cannot keep up with, creates free utility via the network effects, and – in conditions of a competitive market – democratises knowledge.

Right now, we have a dysfunctional info-capitalism, in which all these spontaneous tendencies are supressed: by monopoly pricing, by under-employment and precarious low-skilled labour, through rent-seeking business models like Uber and WeWork, and through the creation of vast and systematic asymmetries of access to information.

If I and the other post-capitalist theorists are right, there is no future income or measurable economic growth from which to pay down the debts, or manage down the central bank balance sheets. The ultimate structural reform needed is a managed transition beyond capitalism itself.

It is slowly dawning on the clearest thinkers in the official system that the entire era of financial globalisation has been based on borrowing from and speculating against a future income stream that may not exist. While in the short term, aggressive and radical social-democratic programmes will need to be adopted across the developed world, the strategic task is to design an economy that replaces one based on markets, scarcity, debt, speculation and (of course) carbon.