There is no doubt that the last decade has been a terrible period for average real wages in the UK, with levels still below where they were before the 2008 global financial crisis. It is very tempting to relate this to the weak baragining power of workers. After all, we were being told before Brexit that the economy was strong, so if the benefits were not going to wages they must have been going somewhere else. Some people go further and say that one of the reasons that the bargaining power of UK workers is weak is because of high levels of immigration, and that therefore immigration must be responsible for lower real wages.

What people often forget is that real wages depend as much on prices as nominal wages. If nominal wages in the economy as a whole rise, firms can just pass additional costs on by raising their prices, leaving real wages unchanged. Equally, if nominal wages are depressed, because of weak bargaining power or immigration, firms are able to cut prices to become more competitive, rather than keep prices unchanged and raise their profits.

To see what firms have done on average we can look at the chart below, which shows the percentage shares of profits and wages in national income over the last 30 years. (They do not sum to 100 because of factors like self-employment income and sales taxes.) The share of wages and profits in national income have been remarkably stable over the last two decades. Unlike the position in some other countries, it is not the case in the UK that bosses have been expropriating the gains from growth over the last decade. 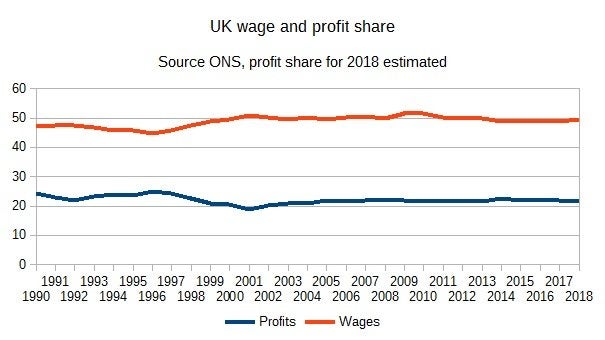 UK suffers highest fall in employment rate in the G7

So what does explain why real wages are still lower than before the global financial crisis (GFC), when the size of the economy a whole surpassed its pre-GFC level in 2013?

The first explanation is that GDP is not the right measure to use if you want to know about standards of living, since it can increase simply because there are more people producing things in the economy. A much better measure is GDP per capita (GDP divided by the total population), and that only surpassed pre-GFC peaks at the end of 2015. It is one of the great ironies of UK politics (and a big media failure) that the modest growth the Conservatives like to boast about is in good part due to immigration they want to stop.

Yet GDP per captita is still higher than it was pre-GFC and average real wages are not. The main reason for that is the exchange rate. We have had two very large depreciations since the GFC: one that happened as the crisis was unfolding and one as a result of the 2016 Brexit vote. This raises the price of imported consumer goods, which reduces real wages relative to GDP per capita. Another way of making the same point is that although each worker is producing a bit more stuff than pre-GFC, that stuff buys less overseas goods than it used to, which means workers are worse off.

The first depreciation probably reflected in part our dependence on a financial sector that was hit by the GFC, but the Brexit depreciation was a completely self-inflicted wound. But that aside, the overall message is that the main reason for lower UK real wages are stagnant productivity and a decline in sterling.

Does this mean that weak bargaining power has nothing to do with weak real wages? There are two potential reasons why there could still be some connection. First, there is some evidence at the individual firm level that firms now share less of their surplus profits with workers than they used to, and that might well reflect weaker bargaining power. Perhaps the UK aggregate profit share might have fallen over the last decade if it hadn’t been for these firms passing on less of their surplus to workers.

Second, it might be the case that one reason why productivity is so poor is that nominal wages have remained low. If nominal wages rose because workers had more bargaining power, that might induce some firms to investment in labour-saving machinery. This is an argument I examine in a new article in a special edition of Political Quarterly on post-Brext policy.

We have one body of evidence on what happens if you raise nominal wages, and that is when minimum wages are increased. If George Osborne’s hike in minimum wages (which now stand at £7.83 for those aged over 25) raised labour-saving investment and productivity then no one has noticed. More seriously, the near consensus of the empirical literature on minimum wages is that increases generally do not reduce employment, and that appears inconsistent with those increases promoting labour-saving investment. An increase in the minimum wage is not exactly the same as an increase in the overall bargaining power of workers, so this piece of evidence is not definitive, but as yet we have no strong evidence that greater bargaining power would spur innovation.

All this suggests that the declining bargaining power of workers is at best only a minor factor behind the decline in average real wages. To increase UK real wages we need to improve productivity, and that means not hitting investment on the head with, first, austerity and then Brexit. Evidence suggests that the best way to increase productivity is by raising demand so firms need to invest to meet that demand. Raising public investment would be the best way to stimulate aggregate demand.

But that does not mean that we should not increase the bargaining power of workers. There seems little doubt that working conditions in some occupations are pretty bad, and a strong trade union presence would be an effective way of improving the working conditions of employees. But I also think a strong union presence in a workplace can have a positive influence on the distribution of real wages.

The average wage measure in the national statistics include some some very high wages at the top of the income distribution. Over the last 30 years the typical or median real wage has fallen by much more than the average, and that is because of rising inequality, a good part of which is due to high pay rises for the top few per cent of earners. While some of that is just down to the rise of the financial sector, some is also contained within firms. Andy Haldane, the Bank of England’s chief economist has also noted (page 8) that since the 1990s the wage share of older workers has risen, but the wage share of younger workers (below 35) has fallen. Furthermore, as Martin Sandbu points out, it is often inequality in the wage distribution that allows firms to continue to employ workers on low wages to do things a machine could do. Some of this growing inequality may have been a consequence of weaker trade unions.

There are, then, plenty of good reasons to want to increase the bargaining power of UK workers. Just don’t expect that to have much impact on the living standards of workers. To raise real wages we need higher UK productivity, and that will only come from stronger private and public sector investment.