Theresa May’s government has been unclear and uncertain about almost everything to do with life after Brexit: whether Britain would remain in the customs union or single market; whether it’ll mean a bigger state or a smaller one; even whether it will make us poorer. (The prime minister has repeatedly refused to say “no”.)

On one matter, though, May and her minions have remained entirely consistent: Brexit means an end to freedom of movement. All those foreigners coming over here, fixing our plumbing, picking our fruit, caring for our elderly? We’re finished with ‘em. Go on, sling your hook.

This is bad in about 16 different ways, of course. It’s bad because it’s meant two years of uncertainty for three million European people who’ve made their lives here, not to mention their partners, children and friends. It’s bad because it means revoking the rights of British citizens, not just those of perfidious foreigners, and nobody seems, even now, to have given much thought to the question of what happens to those Britons who live on the continent. And it’s catastrophic in the way that it’s given succour to a far right that’s now unshakeably convinced that approximately 52 per cent of the electorate are exactly as racist as they are.

But there’s another, more immediately quantifiable way in which ending freedom of movement is bad: it’s going to knacker the economy. And, not for the first time, we have figures.

Last week, the Centre for Cities think tank published a report quantifying the contribution EU migrants made to the economies of the major English and Welsh urban areas. It found, in an entirely unshocking revelation, EU migrants were more likely to be in work than their UK-born neighbours (70 per cent compared to 58 per cent). They’re also better qualified (33 per cent have degrees, compared to 26 per cent of Brits).

As much as I love immigrants, this disparity is unlikely to speak of any great superiority in moral character. Rather, I suspect, is’s accounted for largely by age: younger people are both more likely to have jobs and degrees, and to skip countries in search of economic opportunity. But it nonetheless means that EU migrants make up an unusually productive slice of the UK’s population.

You can see this in which cities are going to be hit hardest by any reduction of EU migration, too. Britain’s most productive cities, those which contribute most to the country’s taxbase, are those of what the Centre terms the “Greater South East”: London and its satellites, Oxford, Cambridge and so on. Which cities do you imagine have the greatest number of EU27-born residents? 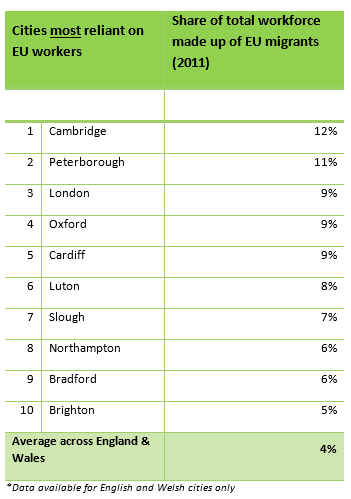 In what seems unlikely to be a coincidence, and with a couple of notable exceptions (Peterborough, Luton, Bradford), those cities are both a lot richer and a lot less Brexit-y than the bottom 10: 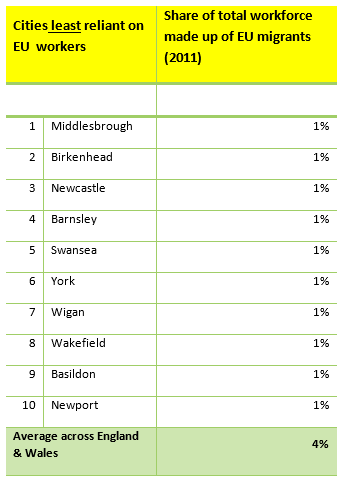 From one point of view – the wrong one, but a point of view, nonetheless – the “problem” of EU migration is solving itself. The Centre for Cities’ report also noted that EU migration to Britain’s cities has already slumped, in 51 out of the 58 English and Welsh cities surveyed.

But as the research suggests, in terms of the economy, freedom of movement was never a problem in the first place: quite the opposite. In fact, that slump in the number of in-comers “raises serious concerns about the ability of these cities to prosper if restrictions on migration increase post-Brexit”.

The report concludes that there is a serious risk that Brexit will lead to labour shortages – and that the government’s “no deal” plans should include a two-year extension of freedom of movement to avoid them. Since the government’s commitment to ending freedom of movement is its single, most steadfast commitment, and since its no deal plans are invisible to the naked eye anyway, I am not entirely convinced this will happen.

This is not the first report which has made the argument that freedom of movement, far from being a drain on the British economy, is one of the key things propping it up. It’s highly unlikely to be the last, either. And yet, we are told that, whatever else happens, freedom of movement absolutely must end.

The government’s entire Brexit strategy, if you can call it such, has been built on a single, questionable assumption: that the British electorate cares more about cutting immigration than it did about the national economy.

There is one, tiny upside to this entire clusterfuck: if that assumption was wrong, we really won’t be waiting long to find out.