Sergio is a Deliveroo rider. He’s been working as a courier for the delivery app since the beginning of 2016, pretty much full-time – 11.30am-11pm, seven days a week, if he can get the hours.

If you’ve been to north London recently, you may have seen him whizz past you on his scooter. If you live there, you may even have opened your door to him, and received some delicious food.

What you also may have seen one afternoon was Sergio (surname Ramos – no, not that one), a 41-year-old father-of-two who moved to the UK from Italy six years ago, falling off his motorbike at the end of May in 2016.

It was raining. He braked, and his bike skidded on some little stones on the ground, made slippery by the downpour. He broke his hip.

“I already had 15 orders,” he recalls of that afternoon, speaking to me over the phone. He had called Deliveroo and said he needed to break for 15 minutes: he was desperate for the loo.

Deliveroo told him to log out of his app, and log back in straight away once he was back. So he went to a petrol station, used the toilet, fuelled up, then switched his app back on – ready to travel to his next order. Just as he was arriving to pick up the food, he fell.

Sergio was off work for two months. When he returned to work, it was with a portable crutch that he kept in the box on his bike, which he used when walking up to restaurants for pick-ups, or customers’ doors for drop-offs.

He received an allowance from the government while he was recovering, but nothing from his company. No sick pay, and no lunch or rest breaks built in to his working day.

This is because Deliveroo riders are self-employed, rather than employees with pensions, holiday, sick pay and other rights available to workers who have an employer.

Deliveroo sees this as one of its biggest appeals. A spokesperson tells me 90 per cent of its riders prefer to work flexibly, therefore being self-employed – choosing when, where and whether to work – suits the majority of them.

Flexibility is its watchword, and it claims riders prefer such an arrangement. An average Deliveroo driver works 15 hours a week for the app, after all.

But not riders like Sergio, who finds this freedom an illusion. He has to book his hours a week in advance every Monday, or they’ll all get snapped up – a system that doesn’t suggest Deliveroo riders are truly free to dip in and out when they choose (though the company claims booking ahead is a popular system with its riders).

“I don’t have any stability to know if it’s going to be good hours or fewer hours,” Sergio says.

He’s paid £7 an hour, with an additional £1 for each delivery.

Unlike Sergio, most riders (90 per cent) are paid per delivery rather than per hour: an arrangement encouraged by the company, which argues it is a better deal for riders (averaging £12/hr rather than the £10/hr overall average, according to its figures).

“It’s stressful, because you have to go fast,” says Sergio. “The more these guys do per drop [delivery], I see them work and I feel afraid – they have to run [drive] even faster and it’s so dangerous.”

During the cold snap earlier this year, Deliveroo even offered an additional £2.50 per delivery for riders to work in poor weather. The company says it closed the service when the authorities deemed the roads dangerous, but Sergio says, “they don’t care if it’s raining, if it’s snowing, or if ice is coming from the sky… They don’t have an agreement with any restaurants saying you can stay inside when it’s cold or raining.”

When an order comes in, a rider has to accept it within three minutes or they’ll lose it to another rider – and if they don’t get moving quickly, they will be unassigned from that job.

“I struggle with orders that come in, as you have to go straight away,” Sergio tells me. “Every time you say ‘ok, I’m going to eat something’, you want some food, an order comes. Then I’m not going to the toilet because I’ve got to do this delivery before, because I don’t want to have too many unassignments.”

Too many unassignments can lead to Deliveroo ending your contract – something that happened this week to Sergio’s wife, who has worked for Deliveroo since 2015, from 5pm-11.30pm each evening because she looks after the children in the day.

On 6 June, Deliveroo emailed her:

“While there is no obligation to accept any work with Deliveroo, you (together with any substitutes) are amongst the riders with the lowest percentage of deliveries accepted while “available” in the app in your area. As a result, we have decided that we will no longer be offering you work under your Supplier Agreement.”

“I will have to work even more than I work now,” says Sergio, after hearing this news.

He and his wife, who is Brazilian and moved to the UK in 2013, began couples therapy two months ago – their precarious situation was affecting their marriage.

“I started to get too stressed and started to have problems with my wife,” Sergio tells me.

He began taking Wednesdays off – but this didn’t last.

“In the last three weeks, I’ve started to work Wednesday evenings. So I have the day off, but I work the evening,” he tells me. “What happened after the first month is I just realised the money was short.”

Deliveroo often points out its riders are allowed to work for other apps, and there’s never an obligation to accept a job. This is part of the freedom it purports to provide.

Indeed, when Sergio is short of money, he’ll do deliveries for UberEATS from 9am-11am before his Deliveroo shift begins at 11.30am. Then, after his Deliveroo jobs finish at 11pm, he’ll return to UberEATS until midnight.

A British giant of the gig economy, Deliveroo started up in 2013 and now has operations around the world, with 35,000 riders globally – including 15,000 in the UK. It can provide such an efficient service with lean costs because it doesn’t employ the bulk of its workforce.

This set-up can work well for casual riders – I’ve spoken to a student who uses the app to make a decent bit of cash on the side while he studies – but it most benefits the company’s bottom line.

Riders like Sergio who rely on Deliveroo for work feel precarious. They are fighting to achieve recognition, and rights, as workers – and they just came a step closer this week, in what could be a big blow for the gig economy.

On Tuesday morning this week, the couriers branch of a small union called the Independent Workers of Great Britain won a High Court decision to pursue its case against Deliveroo.

Last year, the IWGB unsuccessfully tried to win a collective bargaining deal for Deliveroo riders (which would have empowered them to negotiate pay, hours and holidays, etc with the company), then appealed this decision and lost in the High Court, having to stump up £10,000 worth of Deliveroo’s legal fees – a sum it had to crowdfund.

This time, the High Court has given the go-ahead for a full judicial review to challenge last year’s decision – and rethink the classification of Deliveroo riders as self-employed contractors rather than workers.

The bust-up between barristers at Tuesday’s hearing was based mainly on a clause in Deliveroo’s contract – added in May 2017, just before the tribunal about its riders’ status began on 23 May, a few weeks later.

The clause is a “right to appoint a substitute” – a term that means a worker is not truly a worker, because someone else can supply the service they provide without breaking the contract: 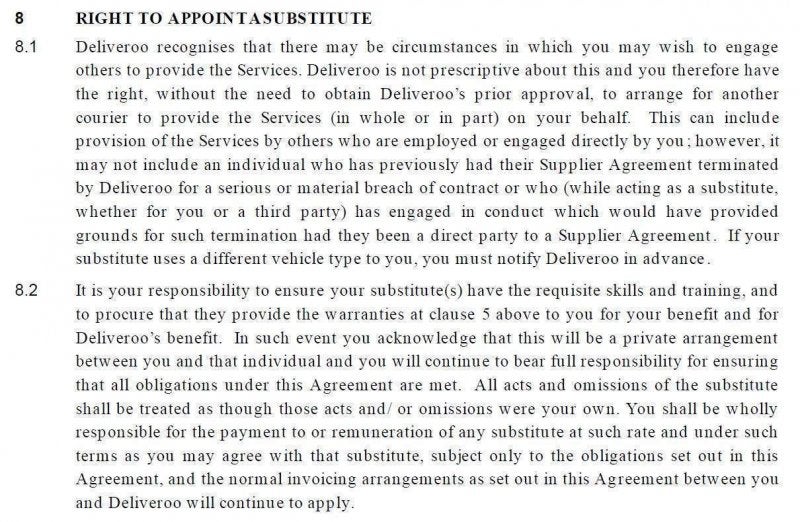 “We say that clause was nonsense,” says IWGB general secretary Jason Moyer-Lee. The union’s lawyers argued in court that this right to appoint a substitute was not meaningful, because you couldn’t just drop your order and get someone else to do it for you, in reality – whereas Deliveroo’s lawyer provided an example of this happening, and even argued anyone in the UK could stand in, out of “60 million people”.

A spokesperson for Deliveroo says the company wants to give riders “more benefits in a way that is compatible with flexible working”, criticising the “trade-off between flexibility and security that exists in employment law”.

Last December, the company announced it would pay for an income insurance policy for its couriers – paying 75 per cent of their gross income from the past year for up to 26 weeks, in the event of injury or illness. Couriers pay £1.85 a week for this cover.

“We want to go further and will continue to argue to government that this should be achieved through policy change,” says a spokesperson.

The judicial review permitted by the High Court will give riders the chance to challenge the premise that they’re not workers.

Following the Supreme Court ruling against Pimlico Plumbers on Wednesday – finding its freelance workers entitled to employment rights – it’s another big opportunity for Britain’s gig economy workers to get a better deal.