George Osborne was snared by his own creation, the Office for Budget Responsibility, after last year’s Autumn Statement when it projected that his planned cuts would reduce public spending to its lowest level as a share of GDP since the 1930s. Cue grainy images of the Great Depression and comparisons with The Road to Wigan Pier.

The Chancellor sought to neutralise what had become Labour’s strongest attack line in yesterday’s Budget (with mixed results) but the OBR has still caused trouble for him today. To the consternation of the Treasury, it warned of a public spending “rollercoaster” to come with “a much sharper squeeze” from 2016-18 than anything seen over the past five years. Here is said rollercoaster. The giddy ride results from Osborne’s plan to meet his tough fiscal target of a surplus while ensuring that spending exceeds its 1930s level at the end of the next parliament (hence the sudden splurge in 2019-20). 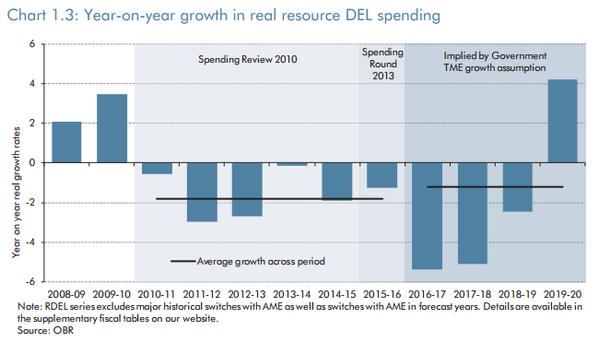 Challenged on the Today programme this morning, Osborne rejected the OBR’s assessment on the grounds that it failed to take into account the £12bn of welfare cuts he has vowed to to make and the £5bn he hopes to raise by cracking down on tax avoidance and evasion (thus easing the squeeze on government departments). He said: “We want to take a more balanced approach and we would not put all the cuts in government departments, as the OBR forecast shows. We would also make savings in the welfare budget and take additional action against tax avoidance, tax evasion, aggressive tax planning. So we would have a more balanced approach.“

But pressed on specifics, he gave no new details. Osborne merely restated his pledge to freeze working-age benefits for two years in the next parliament (which raises just £3bn of the promised £12bn) and concluded: “We’ve saved £21bn in this parliament, so now we need £12bn in the next. As with welfare and government departments and tax avoidance and evasion, people can judge me on my track record.”

The problem for the Chancellor is that many of the easiest and most valuable welfare cuts (such as switching the indexation of benefits from RPI to CPI inflation) have already been made. The Tories have also vowed to protect universal pensioner benefits and to maintain the “triple-lock” on the state pension (so that it increases by the rate of inflation, average earnings or 2.5 per cent, whichever is highest) meaning that nearly half of the social security budget is ring-fenced from cuts. To raise the full £12bn, Osborne will need to impose dramatic new cuts to benefits for workers, families and/or the disabled. Even maintaining the freeze on benefits for the full five years of the next parliament would, as the IFS has noted, only raise £6.9bn.

One welfare cut that is likely to be announced by the Tories before 7 May is limiting child benefit to three children per family – but this would save only £300m. That Osborne is unprepared to reveal the other measures he would take suggests that they either do not exist (and he plans to raise VAT or other taxes instead) or that they are simply too punitive to be announced this side of an election. By remaining so evasive, the Chancellor is allowing Labour to warn that the worst really is to come.