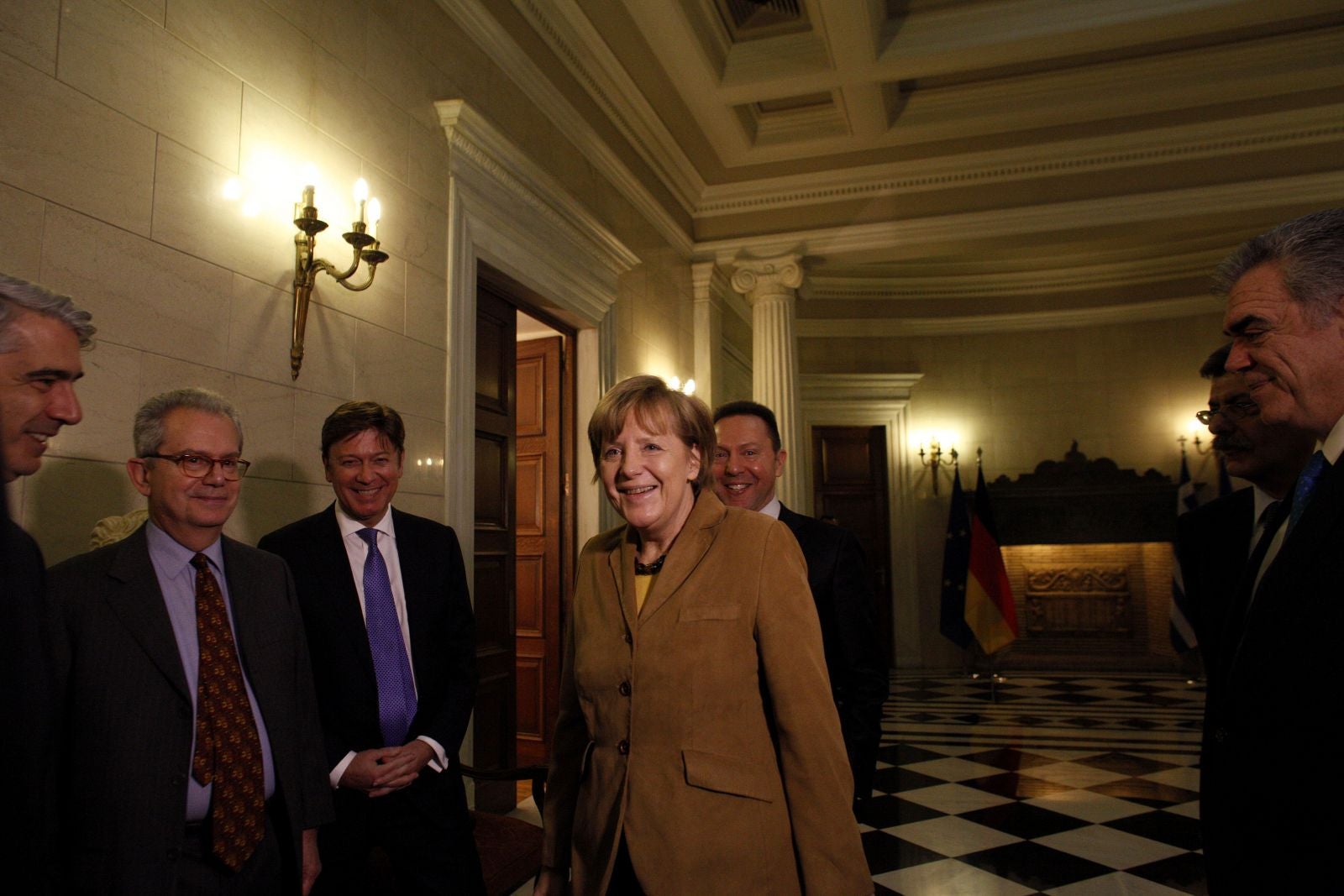 German Chancellor Angela Merkel in Athens, 2011. Photo: Kostas Tsironis – Pool/Getty Images
For five years eurozone leaders have avoided, rather than confronted, the failure of austerity on the Continent. The economic and human damage wreaked by the programme imposed on Greece, Spain and other debtors has been dismissed as the necessary price of reform.

However, the point at which the EU could avert a reckoning may finally be about to end. The front-runner to win the emergency Greek election on 25 January is Syriza, the populist left-wing party that has pledged to demand an end to austerity and to secure the provision of debt relief. The gamble by Alexis Tsipras, the charismatic 40-year-old who leads the movement, is that Germany will relent in order to prevent the withdrawal of Greece from the eurozone and the possibility of a wider currency crisis.

But the briefing from Berlin is that Angela Merkel is “no longer afraid” of “Grexit”. This may be a bluff, designed to discourage Greeks, most of whom wish to remain in the eurozone, from voting for Syriza, but it also probably reflects the belief that the calculus of risk has shifted since the last election in 2012. Given the collapse in member states’ bond yields and the vow by the European Central Bank president, Mario Draghi, to do “whatever it takes” to save the euro – including the deployment of quantitative easing – Germany can reasonably hope to contain the fallout from a Greek exit. To give way to Syriza would be to risk an alternative form of contagion as electorates elsewhere vote for anti-austerity parties in the hope of securing similar concessions.

Yet in calculating the best means of preserving the single currency, Germany only exposes the paucity of its ambition. The offer of debt relief to Greece is justified not merely as an act of a realpolitik but as a precursor to the reforms necessary to avoid permanent stagnation. Syriza’s arguments find echoes in the arguments of economists of left and right. In late 2012, eurozone officials themselves reportedly discussed a plan to reduce Greece’s debt obligations. The labour markets of southern Europe require structural reform but to pursue this path in the absence of measures to support demand is to invite pain without end.

In the UK, as David Cameron seeks to discredit Labour in the lead-up to the general election, he points to instability in the eurozone as evidence for why voters must retain faith in his “long-term economic plan”. However, Europe’s woes reflect not a lack of austerity, as Mr Cameron’s rhetoric would imply, but an excess. It is only the UK’s monetary activism, aided by its non-membership of the euro, that limited the damage from the coalition government’s premature fiscal contraction.

“If the euro fails, then Europe fails,” Mrs Merkel has often said when commenting on the crisis. Yet it does not follow that Europe will succeed if the euro survives. The continent that once aspired to be a rival superpower to the United States is now a byword for decline. In these circumstances, the surprise has been not the intemperance of its voters, but their patience. If EU leaders respond to the possibility of a Syriza victory by giving the appearance that they wish to dissolve the electorate, the danger is that the public will, as in the 1930s, be drawn to more extreme means.