George Osborne prides himself on his commitment to bear down on welfare spending, but today’s report from the OBR (handily commissioned by the Chancellor) shows how he’s struggling. It warns that the new cap imposed on expenditure is in danger of being breached due to the botched implementation of disability benefit reforms and the surging housing benefit bill.

In addition, forecast spending on housing benefit (or, as you might call it, landlord subsidy) has been revised up by £2.5bn (11 per cent) since the expected number of renters and the level of rents relative to earnings have increased at a faster rate than predicted. As wages have continued to lag behind inflation, the number forced to rely on welfare to remain in their homes has surged. The government is now forecast to spend more than £27bn on housing benefit by 2018-19, accounting for more than 11 per cent of welfare expenditure. 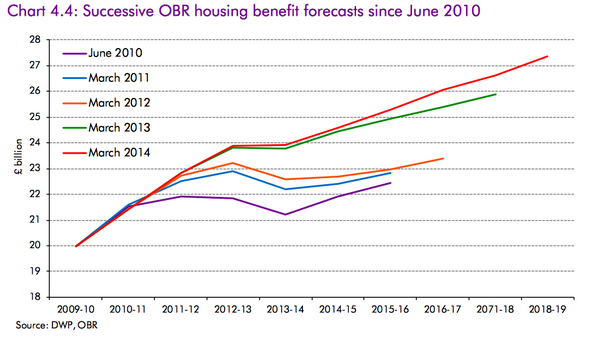 What’s wrong with the British economy?

As the OBR notes, one of the main causes of higher spending has been the shift from public to private rented housing. In 2012-13, the number of private renters exceeded the nunber of social renters for the first time in nearly 50 years. Since private rents are usually higher than social rents, the housing benefit bill has risen accordingly. The OBR also notes that “rents have risen faster than earnings and inflation over the past decade.”

What all of this shows is the limits of an approach that focuses on salami slicing the welfare budget (through measures such as the benefit cap and the “bedroom tax”), rather than addressing the structural drivers of higher spending. Unless problems such as inadequate wages and extortionate rents are tackled (through a significantly higher minimum wage, greater use of the living wage, more affordable housing and limits on rent increases, as proposed by Labour) then it will become ever harder to control expenditure.