One of the big surprises in today’s Autumn Statement lies in the new OBR projections. Growth has been revised up as expected—at least in the short-term. But wage forecasts are down. Amazingly, after today’s largely positive economic news, the squeeze on wages is now going to be even longer than the OBR thought in March. The updates reflect the OBR’s revised view that the crisis has caused a larger and more permanent hit to productivity than previously thought. They will also add momentum to a debate that was already gaining pace before today’s announcement: is the link between economic growth and wage growth weakening? And how soon will a recovery bring an end to the squeeze?

Earlier this week, the Treasury entered this debate by briefing its own new analysis of how the link between economic growth and living standards has changed over the longer term. Their top-line message was clear: there’s been no fundamental shift in the relationship between growth and pay. Instead, wages have simply been squeezed by rising employer costs — both pension contributions and, more pointedly, the increases in employer National Insurance introduced under Labour. But how adequate an explanation do employer costs really provide for the changing link between GDP and pay?

We can answer this by looking at a report written for the Resolution Foundation by Professor John van Reenen and Joao Paulo Pessoa. Although the paper is referenced in HMT’s briefing, they have not gone as far as replicating the wider analysis the paper covered.

In the fuller analysis we see that there are three potential culprits for why the link between GDP growth and wage growth has weakened over time. First there’s the question of whether the share of national income going into workers’ compensation has been falling, and the share going to profits rising. If so, the compensation workers receive will have lagged growth in GDP. Second, there’s the fact that not all compensation goes into wages—some goes into pension contributions and some goes into employer National Insurance. This is HMT’s focus. Third, there’s the fact that wages are not distributed evenly across the economy. If those at the top get a growing share of wages over time, wages for typical workers in the middle— at the median —are likely to lag behind.

So here, in three simple charts, is the story of how much each of these things have mattered in the last 30 years.Chart 1 shows how trends in GDP compare to trends in average worker compensation since 1972. If the share of national income going to labour was falling, we’d see a growing gap between the two. We don’t see much of this. At the start of the crisis in 2008, overall compensation had only fallen slightly behind GDP. This suggests that changes in the share of GDP going to labour don’t account for much of what’s going on.

Chart 1: The role of a falling labour share—GDP and average total compensation

What about the non-wage costs that the Treasury focuses on? Chart 2 shows that a gap has indeed opened up between a measure of average compensation, which includes these costs, and average wages, which doesn’t. This confirms HMT’s basic claim that non-wage employer costs have risen, squeezing the amount left over for pay. Not all of this change is about employer NICs —rising pension contributions have played a bigger role. This is of course no bad thing in itself, although its generational implications are harsh for the young people taking a hit to their pay to fill historic pension fund deficits. Either way, the trade-off between these costs and wages is clear. 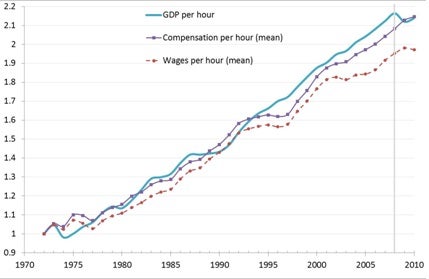 That leaves the question of how wages are distributed by the labour market. Chart 3 shows how trends in median wages—the pay of the worker in the middle of the distribution—compare to trends in average (mean) wages, which also capture growth in wages at the very top. The gap between the two shows the extent to which inequality accounts for the typical worker falling behind economic growth. As we can see, this gap is the biggest of the three. Inequality is a more important explanation than rising employer costs for why the wages of the typical worker have fallen behind GDP.

Chart 3: The role of inequality—mean wages and median wages 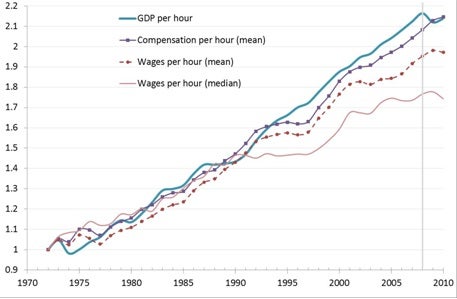 What should we make of all this? There’s no disguising the fact that it makes for a lousy whodunit; no single factor is to blame. And of course today’s new OBR forecasts for wages owe as much to the unusual dynamics of our post-crisis labour market as they do to the longer-term story we see in these charts.

But the findings also show how much we need a more serious, less partisan debate about these fundamental changes in how our economy works. There will be those on both sides of the political aisle that don’t much like the implication of these findings. For some on the left, it is appealing to turn to a falling labour share as an explanation for wages falling behind. They see the owners of capital hoarding ever more profits, squeezing out workers. But in 2008, such changes only accounted for around a fifth of the gap that had opened up between GDP and median pay since 1972. On the other hand, non-wage costs accounted for more than a quarter (27 per cent). That means accepting the basic truth in the Treasury account: rising employer costs put pressure on pay.

But we also need to challenge the temptation, more common on the right, to say that high or rising employer costs are a simple cause of the weakening link between growth and wages. This is inexcusably partial. Inequality accounted more than half (53 per cent) of the gap that had opened up between GDP growth and median wage growth from 1972 to 2008. Yet inequality has so far been missing entirely from government briefing on this issue. If there are still those who think high levels of inequality aren’t relevant to the living standards of ordinary workers, they too need to wake up.