Sometimes it seems that clamping down on tax avoidance is the gift that keeps on giving – because no one really knows the scale of the problem, politicians can be very optimistic about the amount of extra revenue that can be generated. Danny Alexander claimed at this year’s Liberal Democrat conference that a clamp down would provide as much as an extra £10bn a year for the Exchequer by 2015. This is more than rhetoric; the government has been spending some of this additional money already. The commitments in the Autumn Statement to fund policies like the extension of free school meals and the freeze in fuel duty are balanced out by increased tax revenues from reducing avoidance. If those revenues can’t be found, then  the government will have to borrow more, raise taxes or make spending cuts elsewhere.

Today’s Public Accounts Committee report puts the Treasury’s claims on reducing avoidance in perspective. The committee concludes that HMRC “massively over-estimated” how much unpaid tax it would collect from UK holders of Swiss bank accounts. HMRC has only managed to collect £440m so far against an estimate of £3.12bn given in the 2012 Autumn Statement. In the light of these criticisms, it seems sensible to take a step back and interrogate HMRC’s figures.

HMRC makes a calculation of the ‘tax gap’ every year to guide its work on reducing evasion and avoidance. The gap is the difference between the amount of tax that should, in theory, be collected, set against what actually is being collected. Calculating it is very hard; by definition we don’t know exactly how much evasion or avoidance is going on, but HMRC has developed some analytical techniques by which to do so.

Chart 1: The tax gap as a percentage of total liabilities 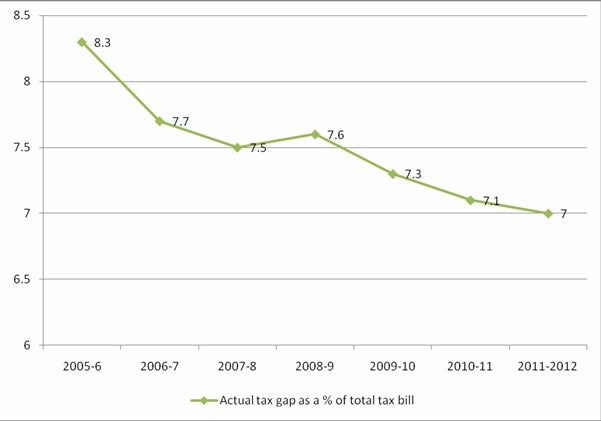 What does this mean for the future? As the UK economy begins to grow again, the likely total tax liabilities will increase, so even if HMRC does not reduce the relative size of the tax gap there will be additional revenue for the government to spend. While the size of the gap will continue to decline, it is unlikely that we will see a huge reduction. Between 2010-11 and 2011-12, the tax gap as a percentage of liabilities only came down 0.1%. If things continue at this rate, the gap will be 6.8% of the total estimated tax bill by 2014-15.

So how realistic was Alexander’s claim of “clawing back” £10bn a year to 2015? If we assume that the total tax liabilities will increase 10% per annum until 2014-15 (a very generous assumption) then to reclaim an additional £10bn a year the tax gap would have to fall to 5.2% of the total tax bill. This represents a 34% increase in the effectiveness of HMRC: implausible at the best of times, but doubly so given that HMRC is facing a further 5% cut in its budget over this period. 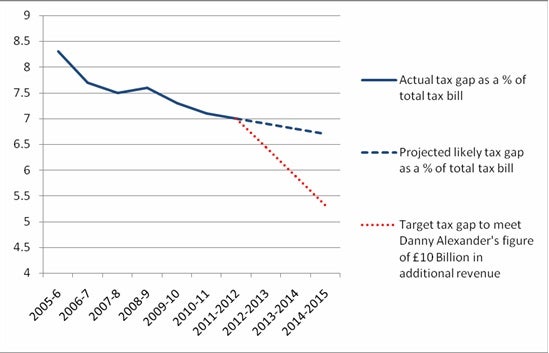 Perhaps recognising this challenge, George Osborne reduced the target from £10bn per year to £6.8bn in total over the next five years in this year’s Autumn Statement. That’s a massive reduction in ambition and it seems that Osborne expects HMRC to get less effective relative to the current trend in performance. If the current trend was kept up, HMRC would bring in an additional £13.1bn; so the Chancellor appears to now share the Public Accounts Committee’s scepticism, expecting it to do only half as well in closing the tax gap as it has been doing.

Arthur Downing is a Researcher at the Social Market Foundation