Many others – perhaps Fraser Nelson does it best – have poked fun at the most Panglossian elements of the Chancellor’s speech on Monday. But I’d like here to address the substantive arguments he makes about what the path of the UK economy over recent years says about the impact of fiscal policy on growth.

The Chancellor doesn’t deny that growth has been much weaker than forecast, although it’s worth repeating the scale of this underperformance. In June 2010, the Office of Budget Responsibility predicted that by now the economy would be about 7 per cent larger, driven by a sharp rise in business investment and exports, while the deficit would have fallen by two-thirds. What has actually happened? In fact, GDP has grown at less than a third of that rate, business investment has fallen, and the path of deficit reduction bears no resemblance at all to the original projections (which is, as I’ll elaborate below, a good thing).

But, the Chancellor argues, this underperformance has nothing to do with fiscal policy:

the composition and timing of the slowdown in GDP growth relative to forecast is better explained by external inflation shocks, the eurozone crisis and the ongoing impact of the financial crisis on financial conditions.

The Chancellor claimed his analysis was supported by many “independent economists” – although, oddly, he failed to mention the IMF, which has been the most prominent independent organisation to argue the contrary. Of course, the IMF and those of us who thought the fiscal consolidation plan was too aggressive never denied that these other factors played a par (and that their reversal will indeed help boost recovery).  As I put it here:

it now seems clear that the negative impact of ‘Plan A’ on growth has been significantly greater than expected, although matters have also been exacerbated by even more damaging policy mistakes in the eurozone, as well as high commodity prices.

Coincidentally, on the same day the Chancellor made his speech, other “independent economists” (Oscar Jorda and Alan Taylor) published a widely reported paper suggesting precisely the opposite (an earlier, non-technical summary is here). They find, as shown in their chart:

Without austerity, UK real output would now be steadily climbing above its 2007 peak, rather than being stuck 2% below. 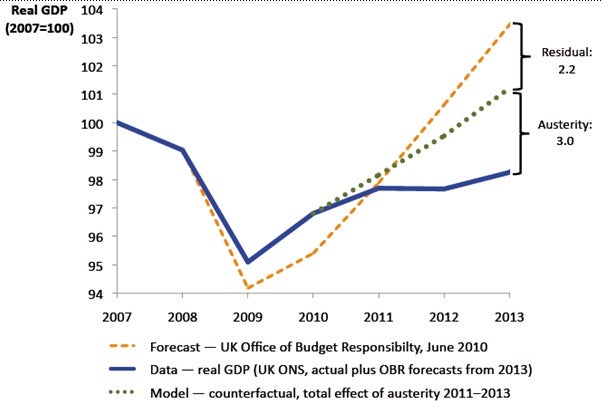 Fiscal contraction prolongs the pain when the state of the economy is weak, much less so when the economy is strong….Keynes is still right, after all: “The boom, not the slump, is the right time for austerity at the Treasury.

However, despite the weight of academic research, the Chancellor goes on to claim that current developments support his interpretation of recent past history:

Proponents of the ‘fiscalist’ story cannot explain why the UK recovery has strengthened rapidly over the last six months. The pace of fiscal consolidation has not changed, government spending cuts have continued as planned, and yet growth has accelerated and many of the leading economic indicators show activity rising faster than at any time since the 1990s.

But this is an obvious sleight of hand.  The claim that “the pace of fiscal consolidation has not changed” is not supported by any of the available data. Here is the OBR’s own chart. As Robert Chote, the OBR’s Chair puts it, “deficit reduction appears to have stalled”.

Indeed, the OECD, the government’s favourite of the international forecasting bodies (since, as noted above, the IMF shares my interpretation of the impact of fiscal consolidation on growth) goes even further. According to its calculations, the UK is actually expanding its structural deficit in 2013. In other words, the government is engaging in fiscal stimulus.  Personally I find this implausible – the OBR’s estimate is that the structural deficit was broadly flat in 2012-13 – but the data hardly seem consistent with the Chancellor’s view.

How did this happen? As I explained earlier this year:

So what’s going on? As I noted earlier, most of the deficit reduction has come from cutting public sector net investment (spending on schools, roads, hospitals, etc) roughly in half. Pretty much all the rest came from tax increases (note that the investment cuts and tax increases were both, to a significant extent, policies inherited from the previous government). And we can see when it happened – between 2009-10 and 2011-12.

But these sources of deficit reduction stopped in 2011-12, because the government belatedly realised that cutting investment was a major mistake and that the economic imperative was actually to do precisely the opposite (not that there was much investment left to cut); and it stopped putting up taxes overall. So we can see also what’s happened since – with the impact of the weak economy on tax receipts reducing revenues, the deficit has been flat and is projected to stay flat.

So the Chancellor’s argument is simply a non sequitur, supported neither by the research evidence nor the data.

As I wrote here at the turn of the year, we should give the government credit for not digging us further into a hole by trying to stick to its original plans. Fiscal consolidation has slowed, at least for the time being, and as a consequence it is playing a considerably smaller role in driving economic developments than it did two years ago. Meanwhile, the eurozone and global environment is, at least at present, considerably more favourable. Poor policy and bad luck has delayed recovery, relative to NIESR’s original forecasts and everyone else’s, but has not removed the ability of the UK economy to generate growth.

So it is perfectly reasonable to ask economic forecasters (including both the OBR and us at NIESR) why we appear so far to have underpredicted the strength of the current upturn. But claiming that this improvement vindicates the earlier damaging mistake the government made by going for front-loaded fiscal consolidation in 2010 just doesn’t make any economic sense.