The Coalition came into Government in 2010 with a plan to repair the public finances and set itself a target to eliminate the structural deficit. The ONS today published figures showing that GDP in the second quarter of this year is even higher than we thought, rising by 0.7 per cent rather than 0.6 per cent. But it isn’t clear if this is good or bad news for the Chancellor’s deficit strategy, because the structural deficit – and therefore the billions of cuts that George Osborne is pencilling in – is determined by small changes in a very slippery measure of the state of the economy: the output gap.

The Government’s structural deficit target is carefully worded to take into account the fact that part of the deficit – the “cyclical” part – will automatically disappear as the economy recovers. From a theoretical point of view, this makes sense: there is little point on focusing efforts on areas of spending that are going to fall anyway. The non-cyclical, “structural” part of the deficit – the part that will remain even when the economy is back on track is surely the part to be concerned about.

So since 2010, the Office for Budget Responsibility (OBR), whose remit is to report on Government’s performance against its fiscal targets, has set about trying to measure the “output gap” – a measure of how far the economy has to recover.  The output gap is the difference between actual GDP and “potential” GDP. Potential GDP is the level of GDP that the economy could achieve if it were operating at “full capacity”.

But it has become increasingly clear that in practice, the output gap is just too difficult to measure. The OBR’s twice-yearly reports always show a comparison of the OBR’s estimate of the output gap against those made by other forecasters – including banks and independent forecasting houses. This provides a useful sense-check of the OBR’s figures.

The last OBR report in March, showed, as it always has done, the huge range that different forecasters have come up with in measuring the output gap – ranging from -7.3 per cent to -0.9 per cent for 2013. To put this into context, just a two percentage point difference in the output gap estimate is enough to change the forecast structural deficit in the Government’s target year of 2018 by around £28bn – no small amount when the Government is looking to cut around £33bn after the election.

Earlier this month, the Bank of England, searching for a way to measure the state of the economy as part of its Forward Guidance, decided against the output gap, saying that:

“The output gap is unobservable and difficult to explain, and any estimate would be subject to substantial uncertainty.”

Instead, it plumped for unemployment as a measure. And now even as the economy is showing some signs of life, independent forecasters still can’t agree among themselves on what the positive growth figures mean for the output gap, as shown in the chart below. Of those releasing estimates after July’s surprise good news on growth from the ONS, two thought this meant the economy was now closer to potential. One thought that it was now further away – presumably taking the good news on GDP to be a sign of underlying productivity improvements that mean that the economy’s potential has expanded. And two kept their output gap estimate unchanged. 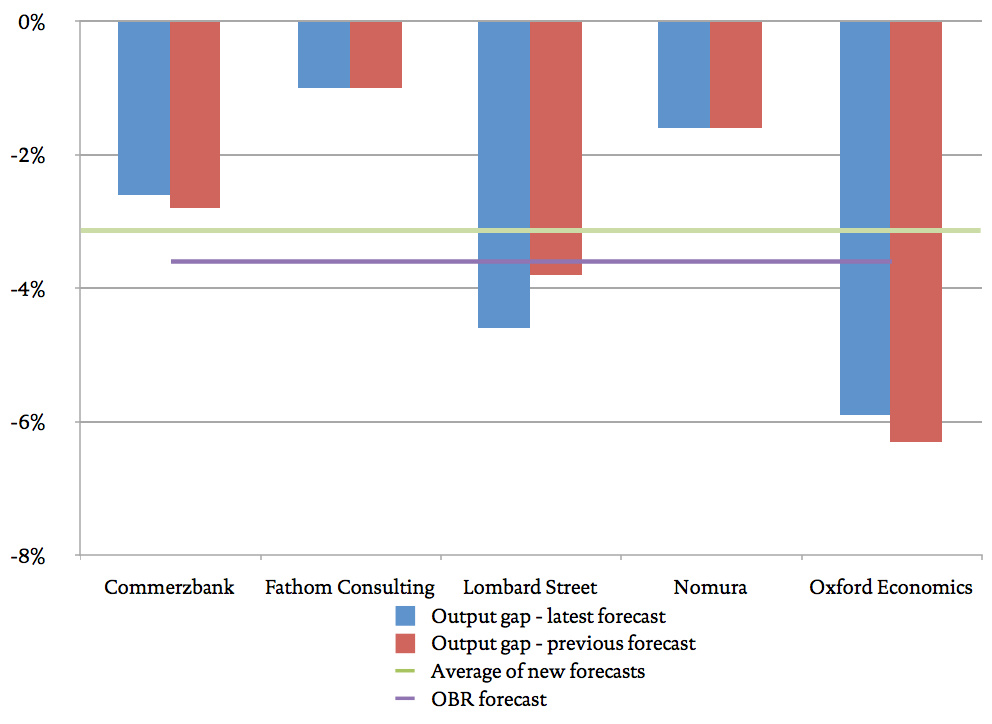 Chart: Forecasts of the output gap in 2013

HM Treasury, Forecasts for the UK economy: a comparison of independent forecasts, August 2013

The question has to be asked: how useful is a public spending target that depends on such an uncertain measure of the economy? Perhaps recognising this, or perhaps because it made for a better statistic, George Osborne omitted to mention the “structural deficit” at all in his last Spending Review speech in June, referring instead to the overall deficit. And even though the structural deficit – on OBR forecasts – is due to go into surplus by 2016-17, George Osborne’s planned cuts stretch out to 2018. So does the Chancellor himself still believe in the usefulness of his target?