At a time when Labour is attacking the coalition for presiding over a “cost of living crisis”, the latest figures on earnings contain the superficially good news that the average weekly wage, including bonus payments, rose by 2.1% between April and June compared with the same period last year – the first time the growth rate has exceeded 2% since late 2011.

But read on and it soon becomes clear what lies behind the spike. The ONS notes that “The relatively high growth rate for April to June 2013 partly reflects unusually high bonus payments in April 2013. Some businesses have reported that they paid bonuses in March last year but in April this year.”

The ONS doesn’t explain why they did so, but it might just have something to do with the fact that April was the month that the cut in the top rate of tax to 45p took effect. Had businesses paid out bonuses in March as usual, they would have been taxed at the higher rate of 50p – this was avoidance on a grand scale. 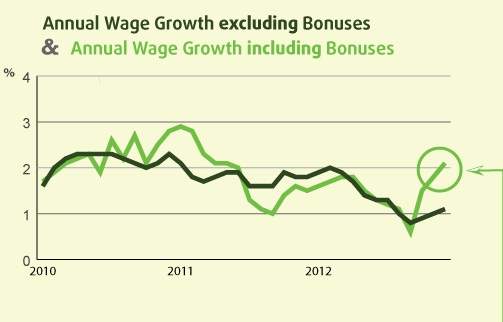 If we strip out bonuses, average weekly earnings rose by just 1.1%, 1.8% below the rate of CPI inflation. As the Conservatives resurrect the myth that “we’re all in this together”, today’s figures are a salutary reminder that we’re not.