Margaret Thatcher was undoubtedly a transformative prime minister. The only peacetime premiers who might be said to have had a similar lasting impact on British politics are the Victorian titans Gladstone and Disraeli, and Attlee, who led the great post-war Labour government

But whatever else might be said of Thatcher’s record one thing seems undeniable. She was not an investment prime minister. She may be credited by David Cameron for having made Britain great again following the malaise of the 1970s but she failed – and spectacularly so – to invest in Britain’s post-Thatcherite future. As capital spending plummeted, our national infrastructure was left to rot. Public services in particular were starved of resources. Most seriously her governments did little to help find future employment for those industries deemed beyond the pale of the Thatcher revolution.

But nothing better illustrates her failure to invest in Britain’s long term future than her mishandling of the giant windfall she was gifted on entering Number 10 from booming North Sea oil revenues.

There is no doub that oil played a big part in bankrolling Thatcher’s agenda and in allowing Britain to address a chronic balance of payments problem that had besieged post-war government (Tony Blair said in 1987 that North Sea oil was “utterly essential to Mrs Thatcher’s electoral success”). But history should also record that Thatcher missed a trick in not diverting some of the proceeds of oil revenue into an oil fund, like Norway and others did. Instead she used the lot to support current spending, including covering the costs of large-scale industrial restructuring and funding expensive tax cuts to woo middle England.

And what a lot it was. The table below shows government tax receipts from the UK Continental Shelf since 1980 where the numbers have been rebased to show receipts in real terms, expressed in 2011 pounds. In the years between 1980-81 and 1989-90, the Thatcher governments received a staggering windfall of £166bn. 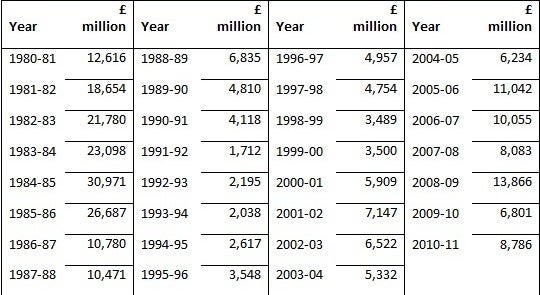 Oil revenues were significant in the 1980s for two reasons. One was that the price of oil was at a real-terms historic high, after two political shocks in 1973-4 (caused by the Arab-Israeli war) and 1978-9 (caused by the Iranian revolution). In 1979 the marker oil price reached a peak of US $93 per barrel at today’s prices. This price has only been exceeded twice in history: once at the dawn of extraction in the 1860s, and once in 2007. The other was that North Sea production came on stream rapidly, with the easiest fields, of course, being exploited first.

Now, no one is suggesting that all oil revenue should have been put away for a rainy day just that some of it should have. To think through what might have been, the Scottish government published a report in 2009 which considered “how much a hypothetical UK Oil Fund would have been worth had the UK Government invested a proportion of oil tax revenue over the past three decades”. The answers, on three different assumptions about the annual investment, and three different assumptions about the nominal rate of return, are shown below:

Value of a hypothetical Oil Fund for UK (2008-09), on assumption that given percentages of North Sea revenues had been allocated to it since 1980.

Building up an endowment is something politicians would often agree is a good idea. But they almost never do it (we don’t for instance have a real National Insurance fund but rather a pay-as-you-go system). The reason is very simple. A politician in a democracy must be re-elected in, at latest, five years’ time. An endowment must be built up, unspent, for much longer than that if it is to yield anything worth having.

Undoubtedly there would have been fiscal consequences had Thatcher opted for an oil fund: after all, you can’t spend and save at the same time. Nevertheless, as these figures show, if just 10 per cent of UK tax receipts from the North Sea had been put into an oil fund starting in 1980 and continuing until 2008, and if the nominal return had been 3 per cent, the value of the fund would be £24bn per annum. Twenty per cent of oil revenues on a return of 5 per cent would have created a pot of £66bn per annum. The failure to create such a fund is brought home when you consider what it could have been spent on. To give one example, hundreds of thousands of new houses could be built to replace the housing stock Thatcher ran down through her iconic policy of selling council houses. We might not face the housing shortage crisis we do today.

The decision to treat tax receipts as a windfall to set against current expenditure was a major policy mistake. Oil and gas in the North Sea are part of the nation’s capital stock. To tax this stock and spend the money in a flow of current expenditure is to deplete the stock. The lesson from history is that tax proceeds on capital receipts should be reserved in some form for major investment projects, something that might be borne in mind should shale gas generate significant revenues.

Had Thatcher been a truly visionary politician, she would have done more to use the the riches from North Sea oil to not only rescue Britain from her troubled past, but also help her be great in the future too.

Guy Lodge is associate director at IPPR. He is co-author with Iain McLean and Jim Gallagher of Scotland’s Choices: the referendum and what happens afterwards published on April 18th by Edinburgh University Press.