Two big holes have been left by the revelation of serious flaws in the Reinhart-Rogoff paper on austerity. The first is that the concept of a criticality at high levels of debt has been demolished. The original paper showed a massive drop in growth rates for countries with debt to GDP ratios over 90 per cent; that simply does not hold anymore. Insofar as the paper shows any negative association, it is linear – the step from 60 to 70 per cent is no more dangerous than the step from 85 to 95 per cent.

But there’s also now an absence of notable economists claiming that high debt ratios cause low growth. In Reinhart and Rogoff’s initial response to Herndon, Ash, and Pollin’s paper, the authors point out that “we are very careful in all our papers to speak of ‘association’ and not ‘causality'”. That’s true, but they have also not been shy about endorsing suggestions that there is an element of causality involved – and their paper has been widely misinterpreted as showing as such.

However, Arindrajit Dube presents pretty compelling evidence that the causality lies in the direction everyone but the austerians expected it to: slow growth causes high debt to GDP ratios, not the other way round. It’s as simple as two charts: 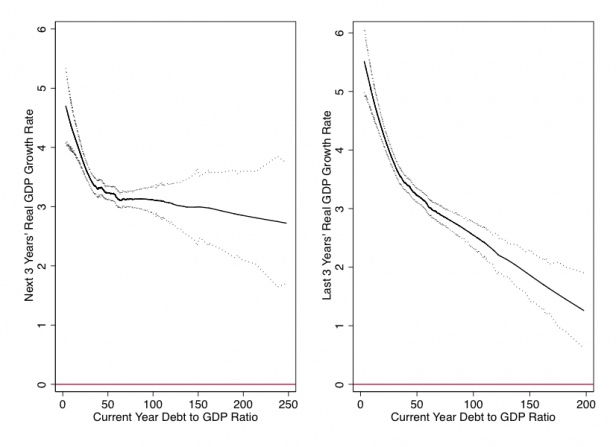 The first image shows the correlation between the debt to GDP ratio in any given year, and the growth in the three years after it. Really low debt comes before high growth rates – but for nearly every other level of debt, the average growth in the next three years is 3 per cent.

Looking backwards, though presents a very different picture. There’s strong linear relationship between low growth in the past and high debt-to-GDP ratios now.

And that’s not surprising! As Dube writes:

One reason is just algebraic. The ratio has a numerator (debt) and denominator (GDP): any fall in GDP will mechanically boost the ratio. Even if GDP growth doesn’t become negative, continuous growth in debt coupled with a GDP growth slowdown will also lead to a rise in the debt-to-GDP ratio.

Besides, there is also a less mechanical story. A recession leads to increased spending through automatic stabilizers such as unemployment insurance. And governments usually finance these using greater borrowing, as undergraduate macro-economics textbooks tell us governments should do. This is what happened in the U.S. during the past recession.

The easiest way to cut the debt – in the only measure which matters, which is it in relation to the size of the economy – is to increase growth, at least back to the long-term trend. Going at it from the opposite direction, and cutting the debt in the hope it will bring growth back, is a recipe for disaster.