GDP figures released today have shown a slight increase of 0.3 per cent over the past three months. But what will this mean for those at the lower end of the income scale, or even those in the middle?

We know that income inequality in the UK has been rising since around 1980, and has offset the benefits of economic growth for most people. But how has it actually changed incomes? Who has gained, who has lost, and by how much?

Figures published by the Resolution Foundation Commission on Living Standards found that in 1977, of every £100 of value generated by the economy, £16 went to the bottom half of workers in wages. By 2010 that figure had declined by 26 per cent, to just £12.

To find out what’s going on in a bit more detail, we used figures from the Office of National Statistics to calculate what income levels would have been in 2010/11 if the distribution of income had remained as it was in 1977. We’ve then compared this to the actual income levels in 2010/11. 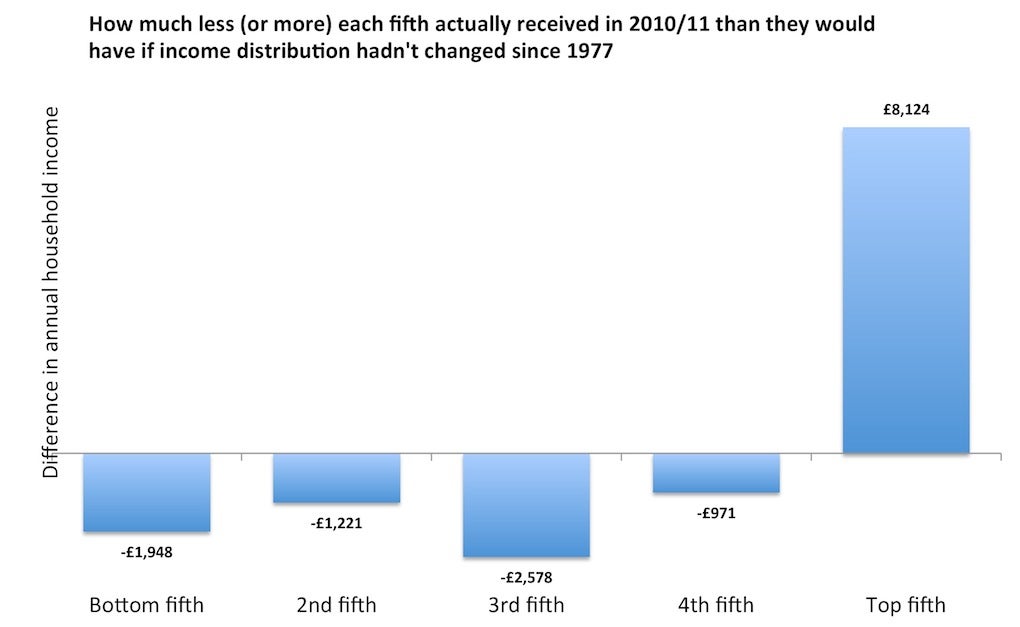 These figures are household income after taxes and benefits, adjusted for the number of people in each household.

If you are in your 30s and 40s and grew up in the UK then you spent your childhood in a society that was significantly more equal than the one we live in now. In the post-war years inequality decreased, reaching its lowest point in the 1970s. The 1980s, however, saw the steepest increase in inequality on record in the UK, with the gap between the top fifth and the bottom fifth increasing by 60% in just a decade, leaving Britain out on a limb (alongside the US) as one of the most unequal countries in the developed world. Since then, successive governments have used the rhetoric of decreasing inequality but failed to reverse this trend.

This rise in inequality is not just affecting the very poor and the very rich. Increasing inequality has meant less income for all households in the bottom four-fifths of the population. Although the pie got larger between 1977 and 2010/11, we can see that the bottom four fifths are all getting a much smaller portion of that pie.

In absolute terms, those losing out the most are not the poorest but those in the middle, who are getting £2,500 less than they would be without the rise in inequality since the 70s. However, it is the poorest that are losing out on the highest proportion of their income. Households in the bottom fifth are living on an average of £10,693 per year, and an extra £1,948 would be an 18% increase on their incomes. With wages lagging behind inflation, a food and fuel poverty crisis and cuts starting to bite, that extra income could be life changing for many of the UK’s poorest families.